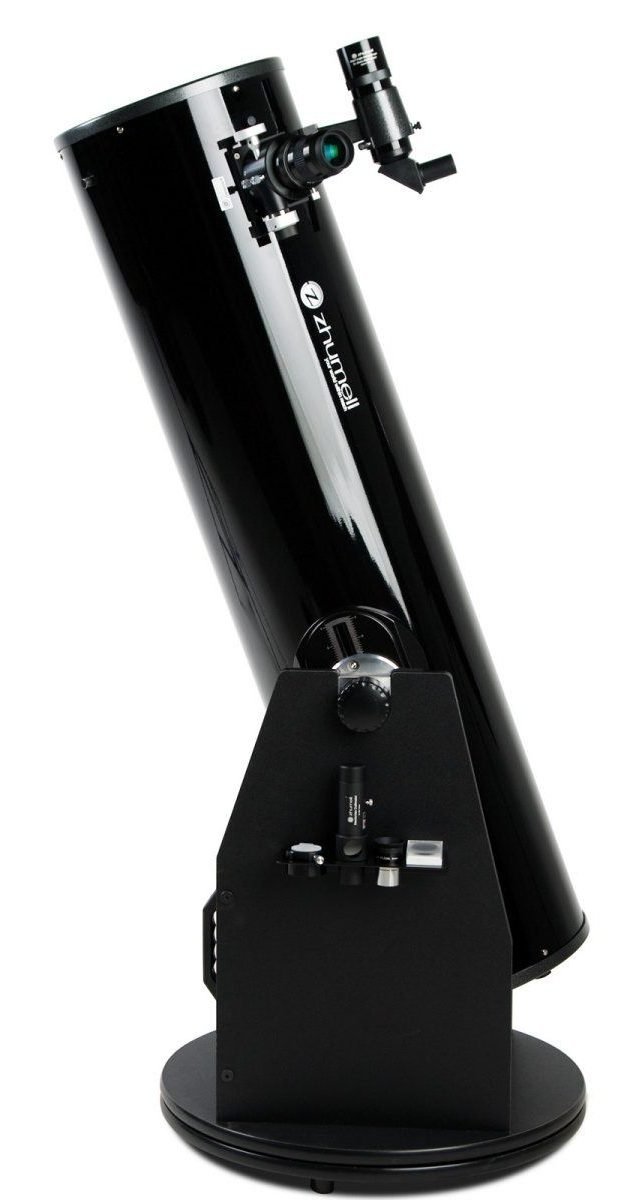 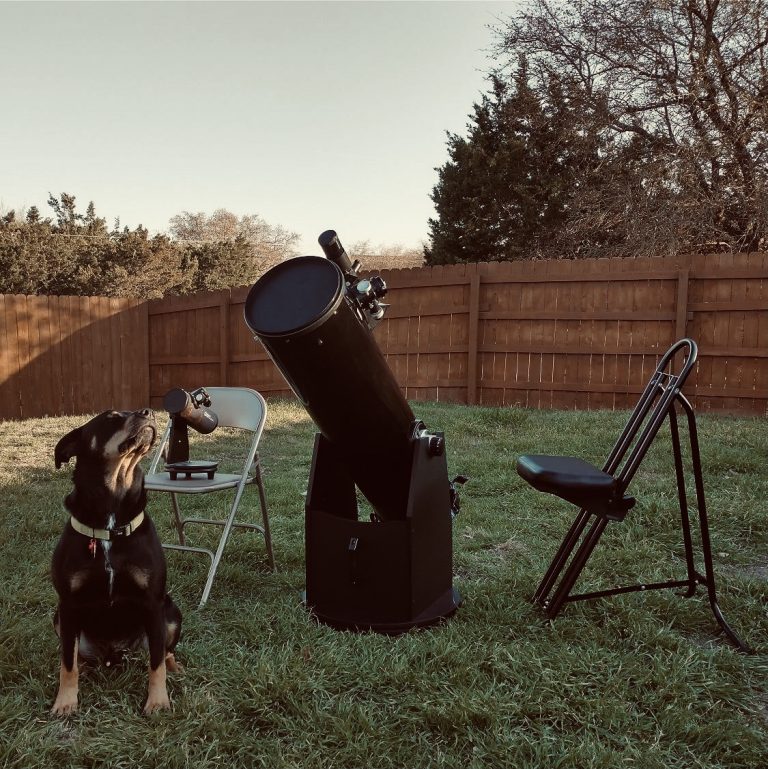 This review is fairly easy to write. Z8 is the undisputable king of starter Dobsonians, and Zhumell applied a classic philosophy with the Z10: If it ain’t broke, don’t fix it.

The reason this telescope didn’t get a “10” is its weight and size. After the 10″ mark, Dobsonians become heavy, and the amount of optical power cannot compensate.

The optical quality will always be superb with any 10″ Dob. What makes Z10 better is its accessories and little features that make life easier. If you can manage the weight, Z10 is perfect. 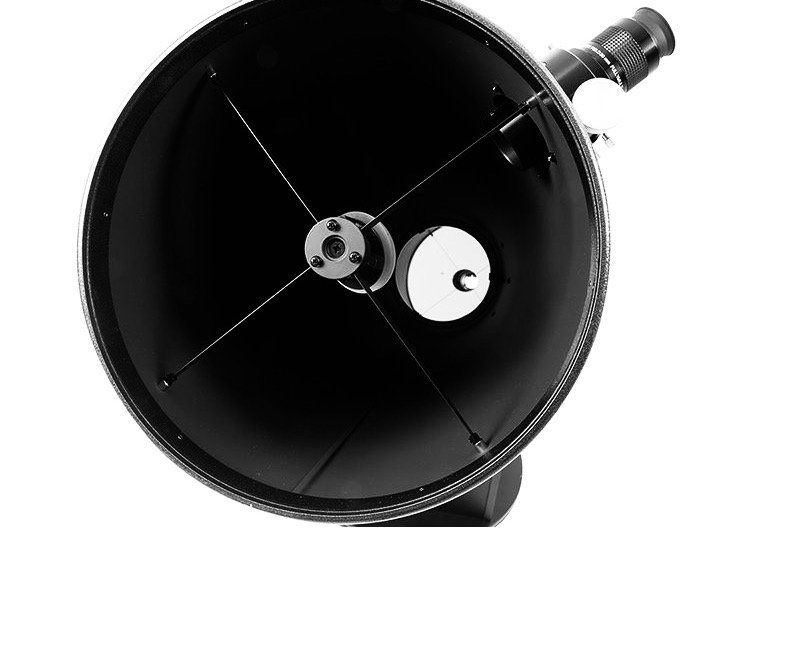 Zhumell Z10/Apertura AD10 Dobsonian has a 10″(253mm) aperture combined with a 1250mm optical tube, providing an f/5 focal ratio. The optics lean more towards deep space performance, but at this size planetary performance is impossible to screw up. The 250mm aperture is enough for more than any astronomer can hope for.

The f/5 focal ratio is harder to align than the usual Dob, but the included laser collimator helps fasten the process.

I wouldn’t. A 12″ telescope will gather %44 more light, but it will weigh around 75 lbs (34 kg). Carrying it to camping sites or even to the backyard will be a challenge. But if you can arrange a place for the telescope to stay permanently, they might be preferable. 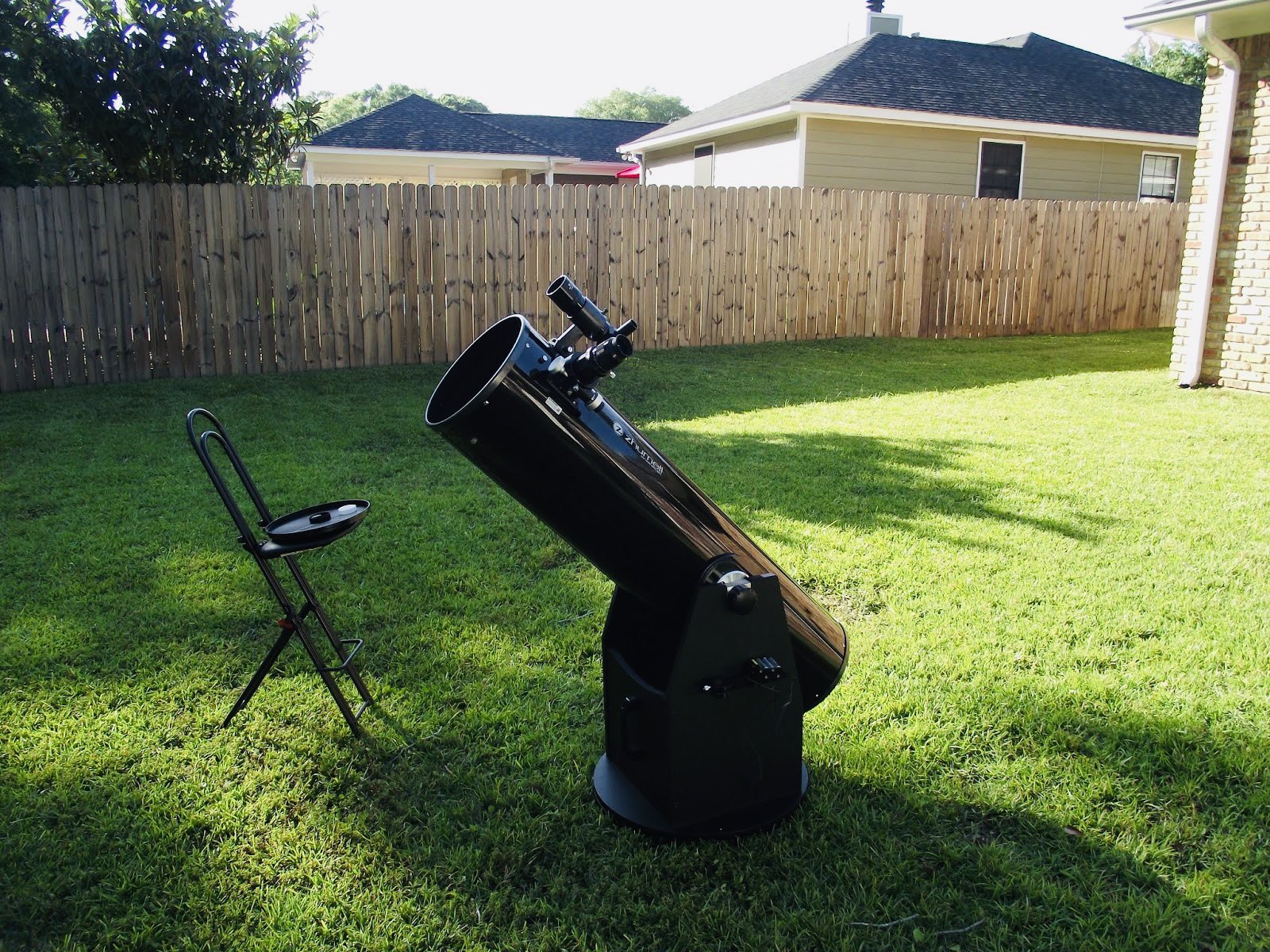 You will be able to observe some detail with all the Solar System planets with Zhumell Z10, except Pluto and Mercury. They will appear as tiny dots as they are far and small objects.

Jupiter will be the planet that reveals the most. You will easily make out all its stripes, The Great Red Spot, and its 4 Galilean Moon’s. The red-yellow-beige-orange colors of the planet will be clear.

The second planet that will reveal a lot will be Saturn. Its rings, The Cassini Divison, many of its moons, and its largest moon Titan will all be easily distinguishable.

Mars will show some surface detail as black and white stains, and its special “reddish” color will appear.

Venus will appear as a yellow disk, and its phases will be observable.

Overall planetary performance is phenomenal. You can’t expect anything else from a 10″ Dob.

Although I should mention that out of the box, you won’t get the maximum planetary performance. The 9mm eyepiece is average at best. I will give some eyepiece recommendations in the accessories section.

Deep space performance is even better than the planetary. This is due to the rather low focal ratio. I would say 80-90% of the Messier Catalog is easily observable with the Z10. Popular targets such as Pleaides, Orion, Andromeda, Whirlpool, Hercules, are razer sharp and bright.

In contrast to the planetary eyepiece, the deep space eyepiece provides something close to Z10’s potential. It is a wide-field-30mm, vastly better than the 9mm. 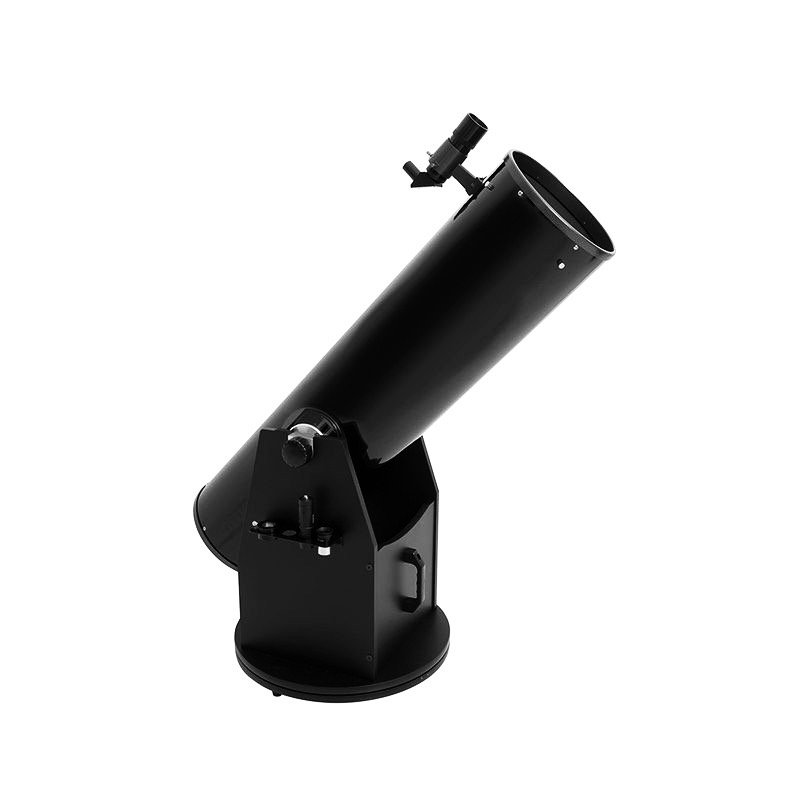 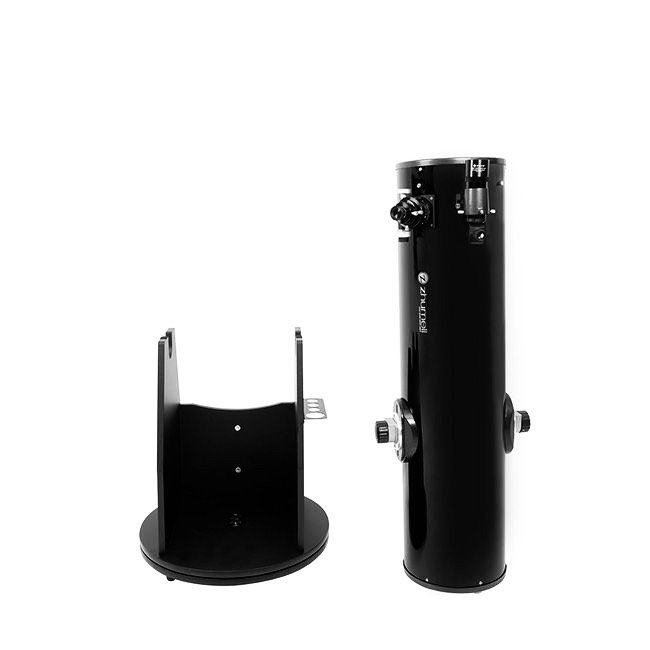 The mount is not anything spectacular. It is the usual, particleboard, Dobsonian mount. The only major difference is the roller bearings that provide the motion and the “movable” bearings attached to the optical tube. 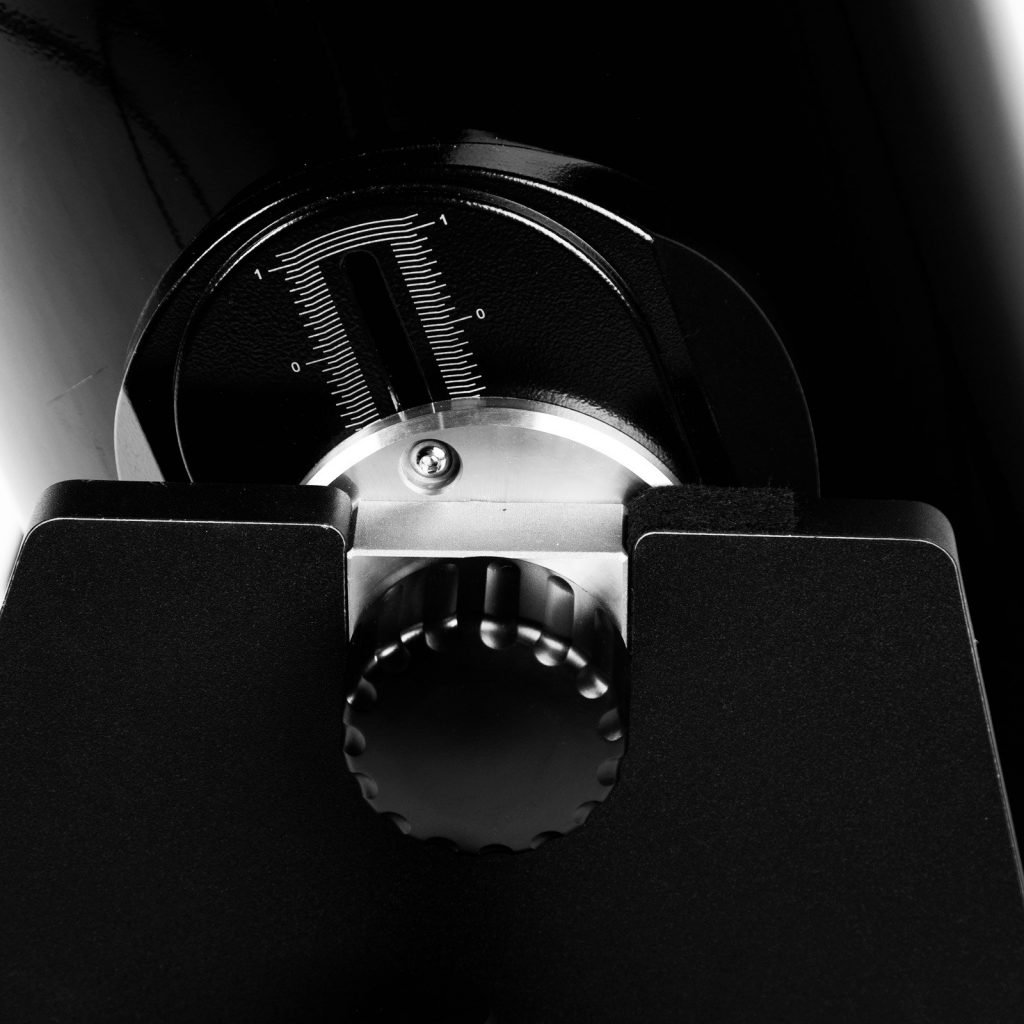 The bearings are hard to move but useful.

The weight of the base is less than the optical tube, and it is easier to carry.

Overall the base is not much, but it does its job without any problems. There are no slow-mo controls or an auto-targeting system. It is the usual manual, Dobsonian mount. The movable bearings attached to the optical tube are the remarkable parts. 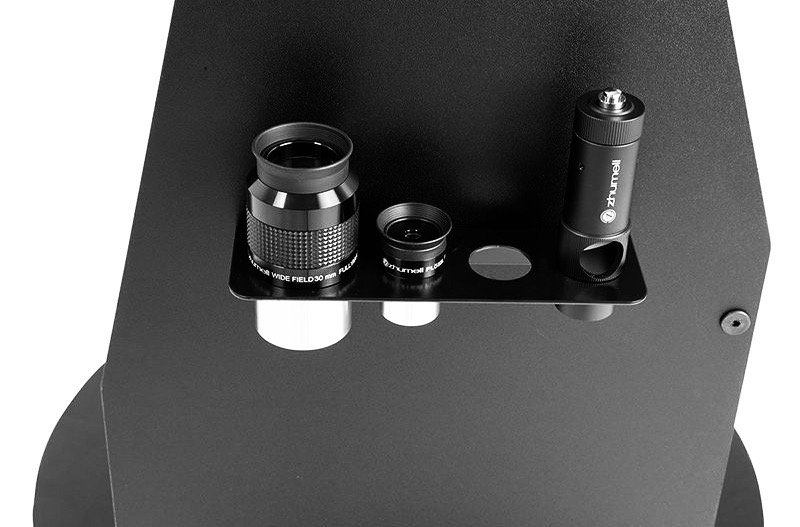 The accessories are what make the Z series better than its competitors. They make the telescope much better out of the box and save you a lot of additional effort. 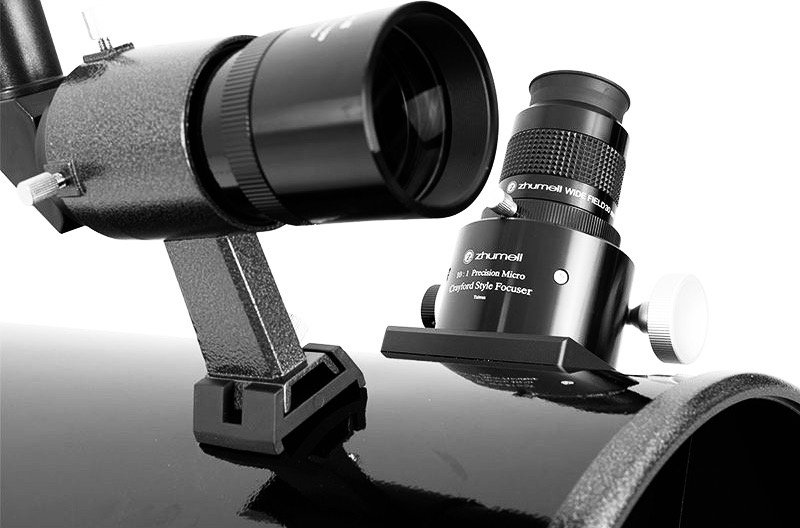 For a Dobsonian, a 90-degree, 8×50 finder is much better than any 180-degree finder. You don’t have to bend down to look through it, which may seem like a no-brainer, but most companies send flat finders with their Dobs. Zhumell thankfully sends a 90-degree 8×50.

As I’ve mentioned before, the 30mm, 2″, wide-field eyepiece is very good. It is superb for deep space performance. Again, most companies don’t send such an eyepiece.

The 9mm is not anything remarkable. It is the usual, planetary, 1.25” eyepiece. I recommend changing it with a Goldline in the future. 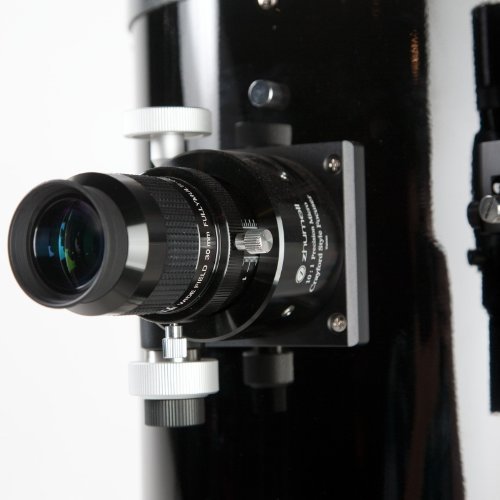 The 2” Crayford focuser is much better than those that come with other 10” Dobsonians. It is harder to move and better built into the optical tube. It is essentially sturdier and smoother. It also has fine-tuning.

The laser collimator is a treat.

The laser collimator is an awesome device. It is much better than the usual collimation cap and makes the collimation process much faster. If you wanted to get it later, it would cost you around 50-60$, at least. 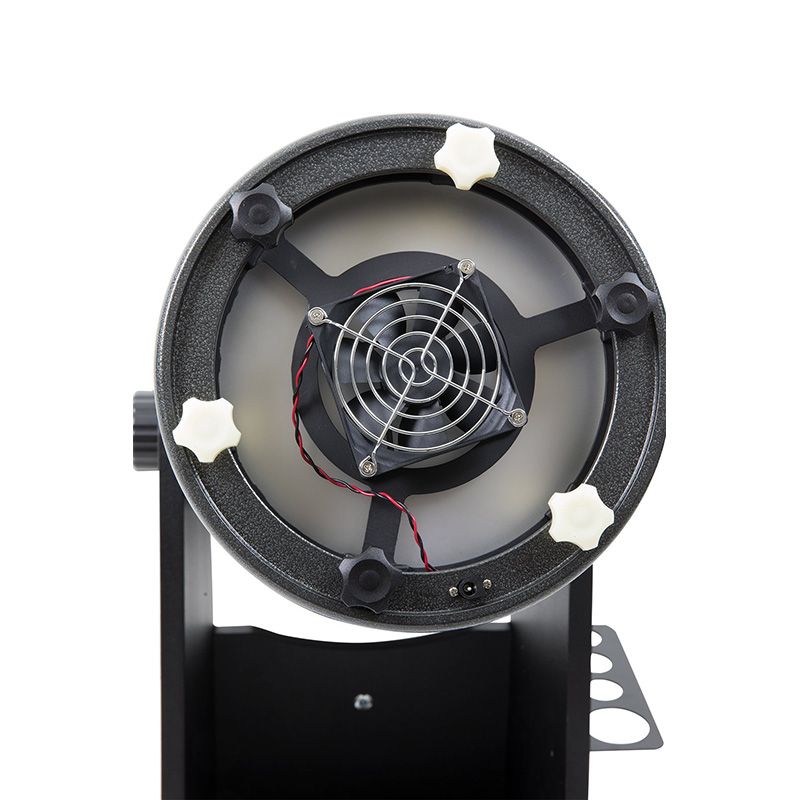 The cooling fan is a little extra, but useful. It helps cool down the primary mirror in case of any sharp temperature changes. It is important for preventing moisture from building up in the primary mirror. Again, it doesn’t come with any other 10″ Dob.

You probably won’t use the moon filter a lot. It is below-average at best.

Overall the accessories are what you would hope for from a 10″ Dobsonian. Combined with the roller-bearings and movable tensioners attached to the base, they take the Z10/Apertura AD10 Dobsonian to another level. 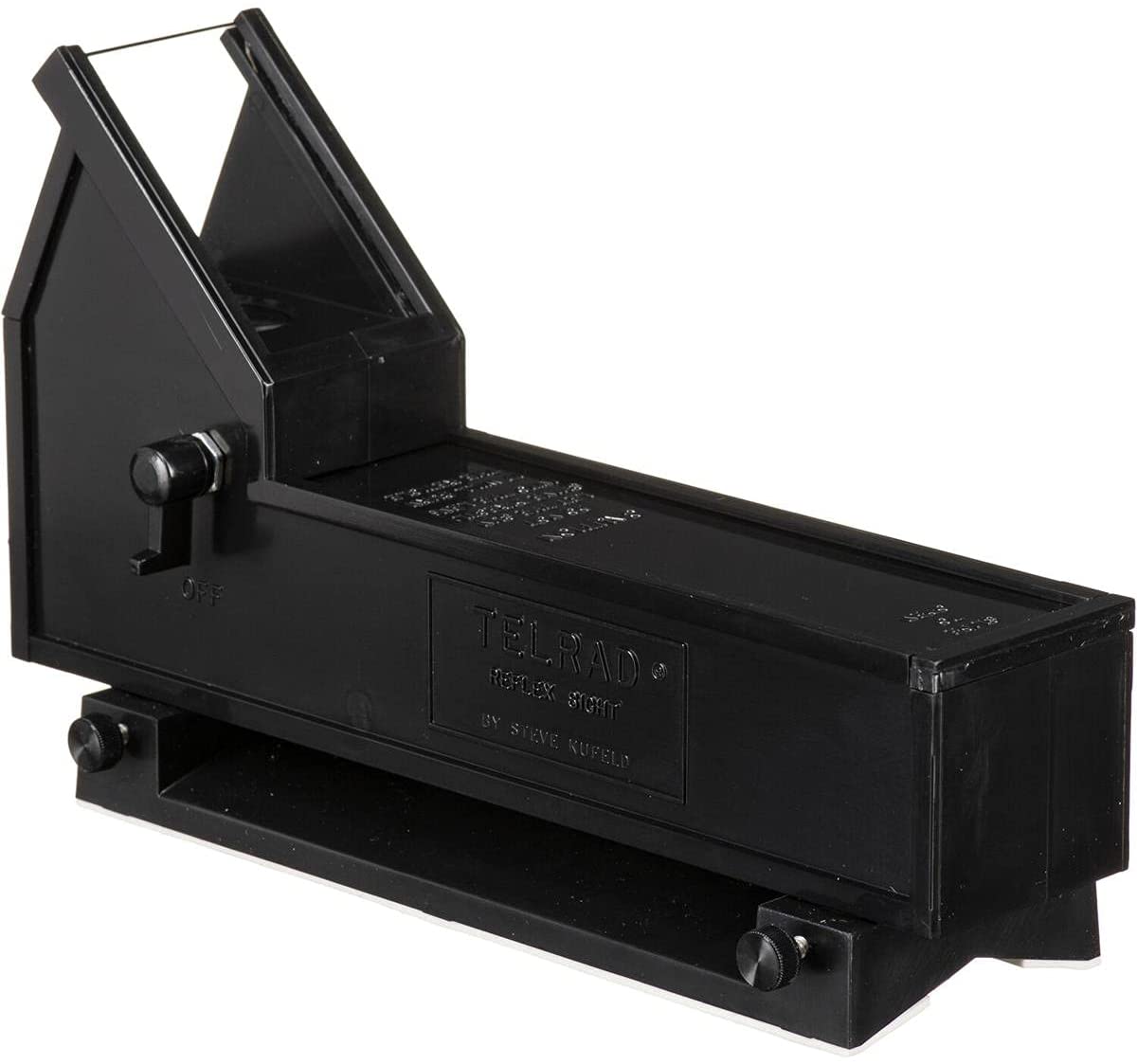 A Telrad finder is usually recommended for large Dobsonians. The reasoning is valid since they are cheap and make life a little easier while finding space objects in the night sky. I would highly recommend one for a Z10.

The weight factor is the most effective problem of Z10. Most people would prefer an 8″ Dob because of that. They are easier to carry around.

The 9mm eyepiece is not suitable for a telescope at this level.

There is no better 10″ Dobsonian you can find. The XT10 and SkyWatcher 10″ have the same optics as Z10, but they come with worse accessories and lack features.

If you can manage the size and weight, and the price, just get a Zhumell Z10/Apertura AD10 Dobsonian. You won’t be disappointed.