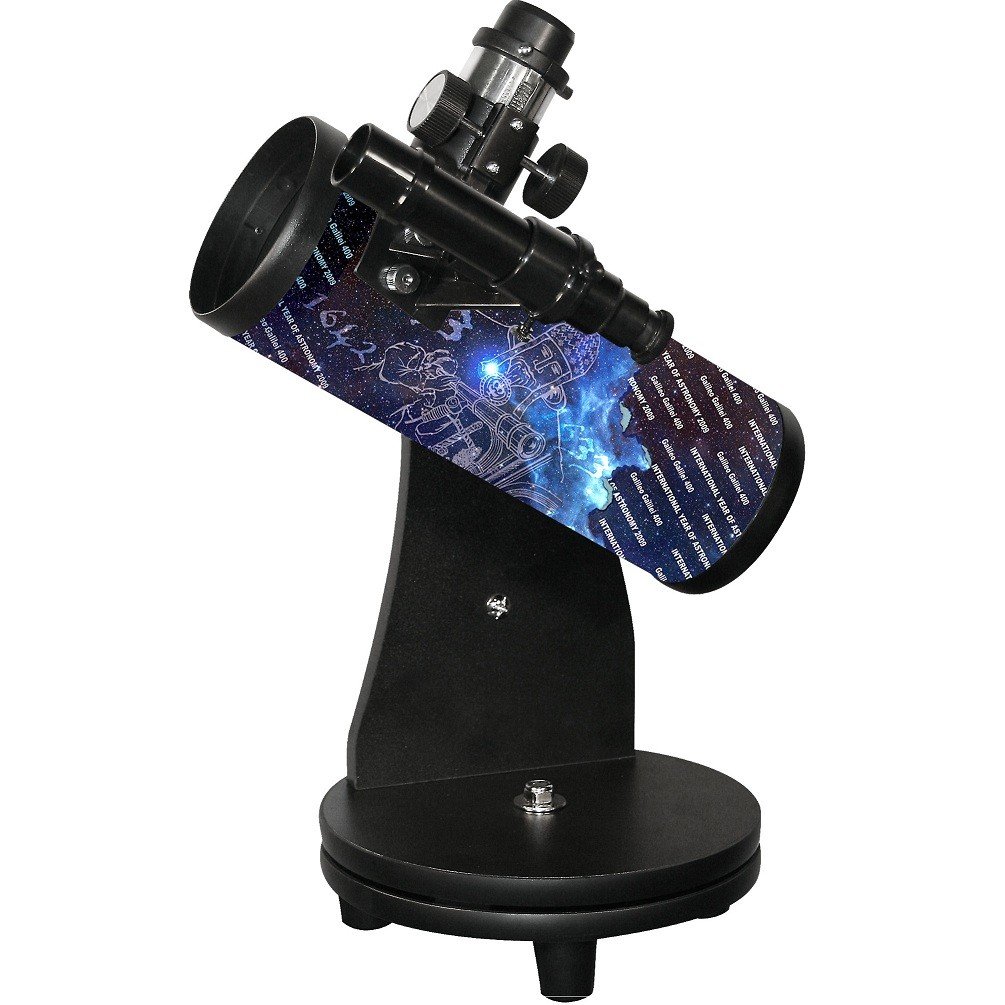 SkyWatcher Heritage 76 Mini is the smallest “serious” telescope model you can get. It is humble, but it is surprisingly well-made and we think it is worth the price. It is also great for getting kids interested in astronomy.

The main worry with such a low-priced telescope is if it will break in two months or is it just a tricky toy to steal your money. It is none of those things. It is robust and rock solid. It has the same build quality as the 400-500$ Dobsonian’s of SkyWatcher, meaning this telescope will stand years of use.

The aperture is as 76mm. It might seem narrow but it gathers enough light to observe deep space objects such as nebulas and star clusters. We were able to see Orion Nebula on a dark night which is truly amazing considering how small the telescope is.

We were also able to get an image of Jupiter and its 4 Galilean Moon’s. You can see Rings of Saturn in a little detail but Mars is really hard to observe since it is a small planet. Craters on the Lunar Surface were detailed and bright, enough to mesmerize any beginner. Just keep in mind planets will look like bright disks instead of actual detailed spheres.

The main advantage of this telescope is that it is incredibly easy to use. It has a wide field of view, which makes locating celestials much easier. It also has a Dobsonian style mount, which is as easy as it gets with telescope mounts.

We think this telescope would especially be great for getting kids interested in astronomy. It is also a good model for people on a tight budget. 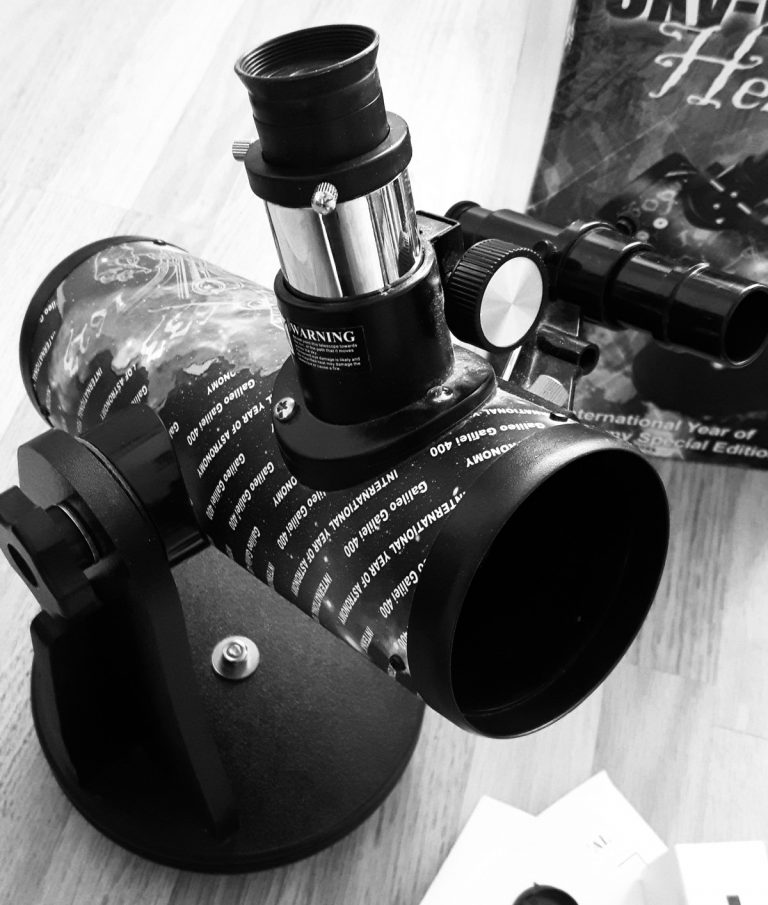 What we can say about SkyWatcher Heritage 76 is that it exceeds expectations. It is under 100$ at the moment which is as low as you can go with “real telescopes”. It is definitely not a department store telescope and it is very suitable for kids. But to be honest if you are keen on getting into astronomy we would suggest you save a little more to a get at least a 130mm aperture telescope such as Zhumell Z130 or SkyWatcher Heritage 130P.

The 76mm aperture is enough for Solar System and deep space. Major planets such as Jupiter, Saturn and Mars appear as bright yellow disks. But you can get some detail, for example, 4 Galilean Moon’s of Jupiter and visible as tiny blue dots, which is a major win for a telescope with such short focal length.

The 300mm focal length lowers the magnification power a lot, but it provides a wide field view; which makes locating celestials and focusing much easier. This is one of the reasons why this telescope is perfect for kids. They certainly won’t have much problem with finding the object they want to observe in the night sky.

Deep space objects are still amazing to look at. The Orion Nebula and Perseus Cluster are sharp and clear, at least enough to astonish a beginner.

Because of the spherical primary mirror you are going to get propagations on the outer edges, but nothing that will affect your observation experience in a major way.

The eyepieces that come with the telescope are 10mm and 25mm and they work surprisingly well. They provide 30x and 12x magnification. Considering 30-40$ price tag on a good quality eyepiece with these apertures, they are acceptable. Keep in mind if you are going to get extra eyepieces consider good quality ones since the optical design is not that powerful.

The mount is the best part of the telescope. It is Dobsonian, so incredibly easy to use. It moves up, down, left and right. The base is sturdy and smooth. The tabletop design provides extra stability which is much appreciated with a telescope this small in size. 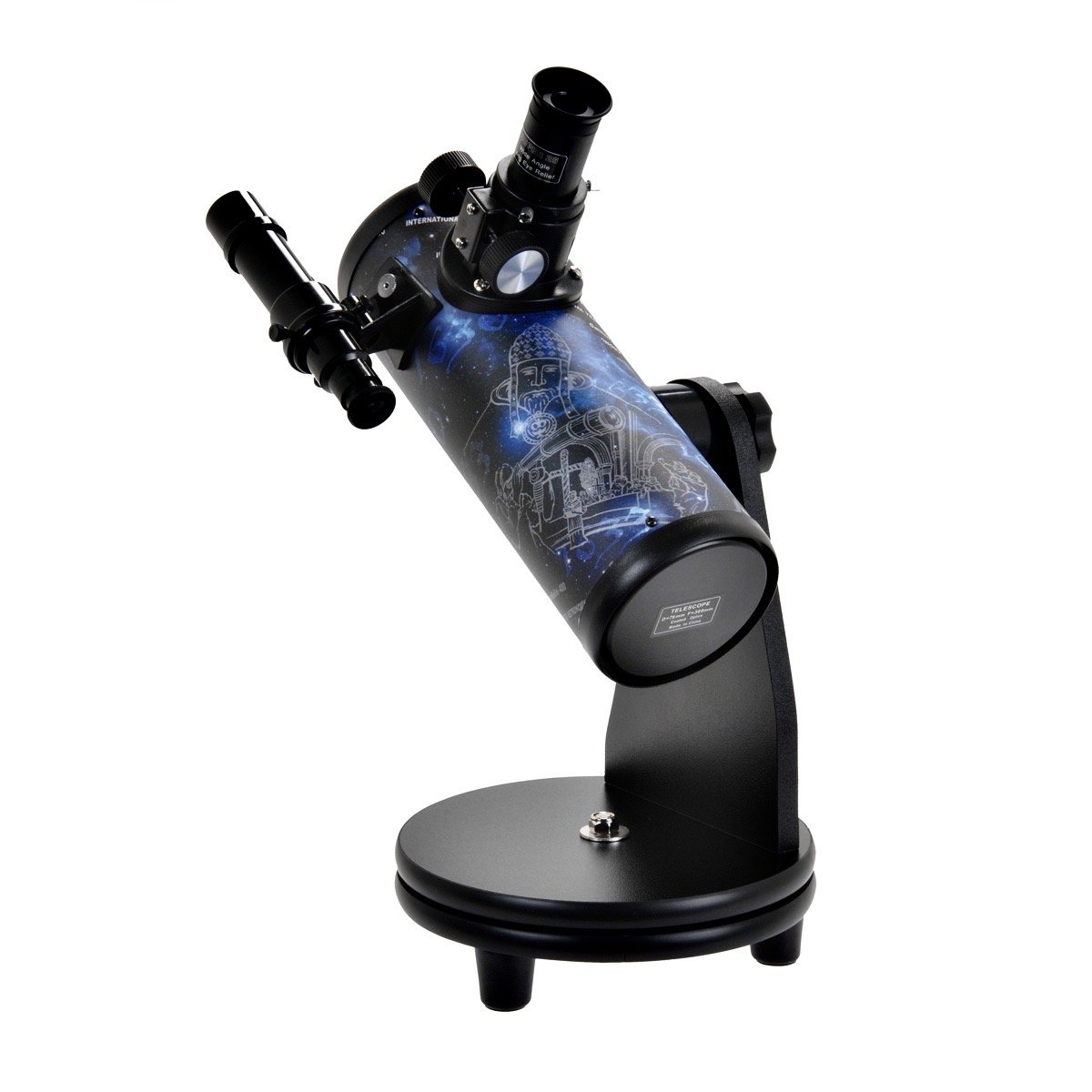 The 5×24 finder works absolutely fine. It provides a little magnification power to help you locate and focus. Some people prefer a red dot finder, which is just personal preference really.

To be honest 76mm aperture is not enough for serious astronomy. If you save a little more you can get a 130mm aperture telescope which will deliver much brighter and sharper images.

We would consider SkyWatcher Heritage 76 as a thoughtful gift or a way to get kids interested in astronomy. It certainly has some value considering its build quality and portability. Its optics do provide beautiful images, but do not get this telescope if you are serious about getting into astronomy. We would suggest you save a little more and get Zhumell Z114 or Z130.