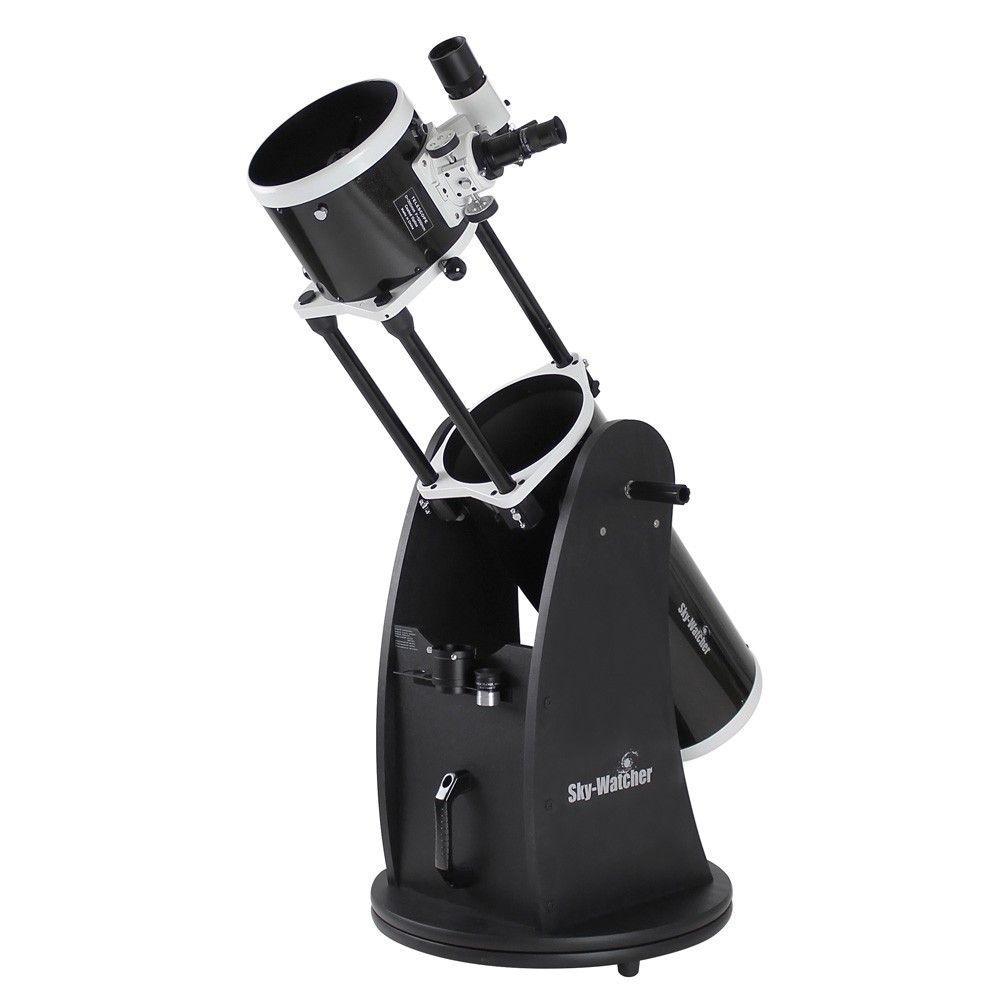 The Sky-Watcher 8” Collapsible Dobsonian (sometimes referred to as the Flextube) is one among many excellent 8” Dobsonians available to beginners.

The 8” Collapsible stands out as the only mass-manufactured 8” telescope with a collapsible tube. 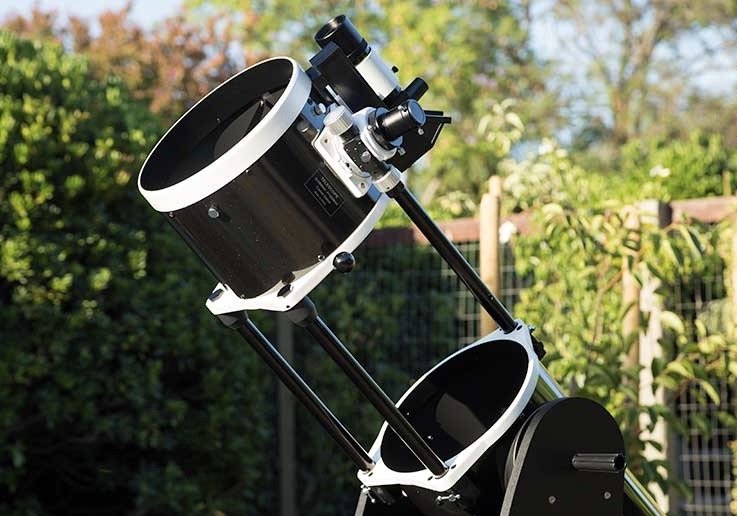 The collapsible tube allows it to fit upright in a passenger seat if need be, across the trunk of even the smallest automobiles, or under cabinets.

The tube weighs about 24 pounds, and is only 33” long when collapsed.

Extending the tube is as simple as loosening 3 knobs, pulling the upper tube assembly, and then re-tightening the knobs once the struts have clicked into place at their fully extended position. 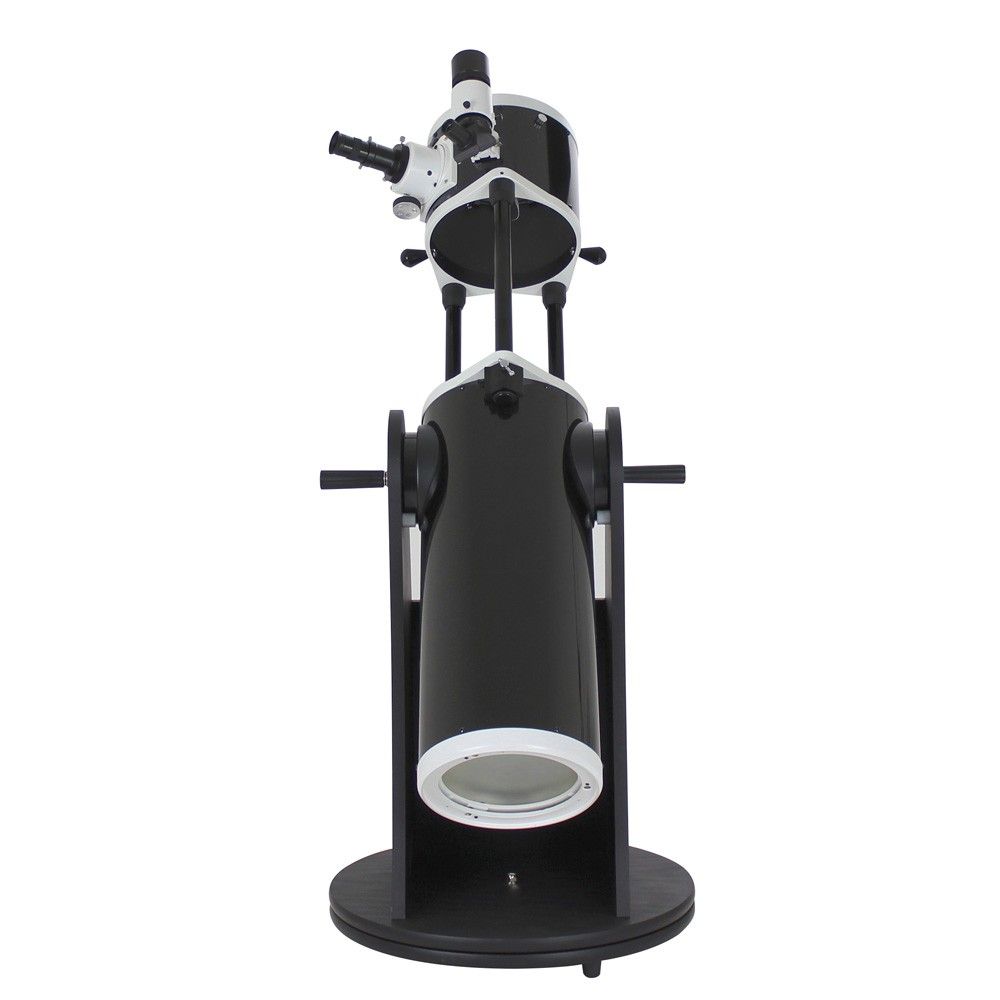 You’ll probably need to collimate the 8” Collapsible the first time you assemble it, and collimation should be checked every time you set up the telescope. It may seem intimidating, but collimating the telescope is a routine and easy procedure that takes just a few minutes.

What can you see inside The Solar System?

The Moon ⧃ Lots of craters, mountains, and ridges - theoretical resolution limit of around 1.4 miles.

Mars ⧃ Around half a dozen dark albedo features, ice caps. Mars is easiest to view for the few months it is close to Earth around opposition, which occurs once every 26 months.
Mars’ outer moon Deimos can be seen if you use high magnification and block Mars and its glare from washing out the field of view.

Asteroids ⧃ Several thousand are easily visible. Ceres and Vesta are clearly not points of light like stars when they are close to Earth on a night of good seeing.

Jupiter ⧃ Around a dozen distinct cloud features, including the two red equatorial belts, brownish polar zones, white cloud belts, and the Great Red Spot. Jupiter’s weather is always changing, so it will rarely look the same over long periods of time.
Io is a yellow-orange disk that is clearly not uniform on nights of good seeing.
Europa is an off-white blank disk.
Ganymede is gray, with a slightly brownish northern hemisphere (Galileo Regio) visible on the best nights with a good high-power eyepiece.
Callisto is gray.
All of Jupiter’s 4 large moons regularly eclipse and transit the planet.

Saturn ⧃ The rings are easily visible at even very low magnification. On a good night you can pick out the Cassini Division and some muted cloud bands.
Rhea, Tethys, and Dione are relatively easy to spot close to the planet. Enceladus and Mimas are more challenging.
Titan is extremely obvious and noticeably non-stellar, perhaps slightly off-white in color.
Iapeteus can be seen easily when its brighter side is facing the Sun.

Uranus and Neptune ⧃ Non-stellar teal and blue disks respectively. On a good night you might be able to see Neptune’s moon Triton. Uranus’ 3 brightest moons are just beyond the reach of an 8” telescope most of the time.

Galaxies ⧃ Even under good conditions, most galaxies don’t show much detail in an 8” scope. The few that do usually require dark skies, but will reward you with views of dust lanes - and in the case of a few such as M51, M33, M101, and M64, spiral arms. M31 and M33 will also show other features, such as a couple star clusters in the former and H-II regions in the latter.

Globular Star Clusters ⧃ The brighter globulars such as M15, M13, Omega Centauri, and M3 will be resolvable into individual stars. Fainter ones will just appear as grainy smudges.

Emission Nebulas ⧃ M42, M8, M17, M20, and a few others will show lots of detail in an 8”, though a nebula or UHC filter really helps especially under light-polluted conditions.

Planetary Nebulae ⧃ Some planetary nebulae will show greenish or bluish colors - typically the smaller and more concentrated they are, the more colorful they’ll be. Larger ones like the Ring, Helix, and Dumbbell are easier to spot but devoid of color.

Open Star Clusters ⧃ Hundreds of colorful (and not-so-colorful) open clusters are visible and easy to find with an 8” telescope even under poor conditions. 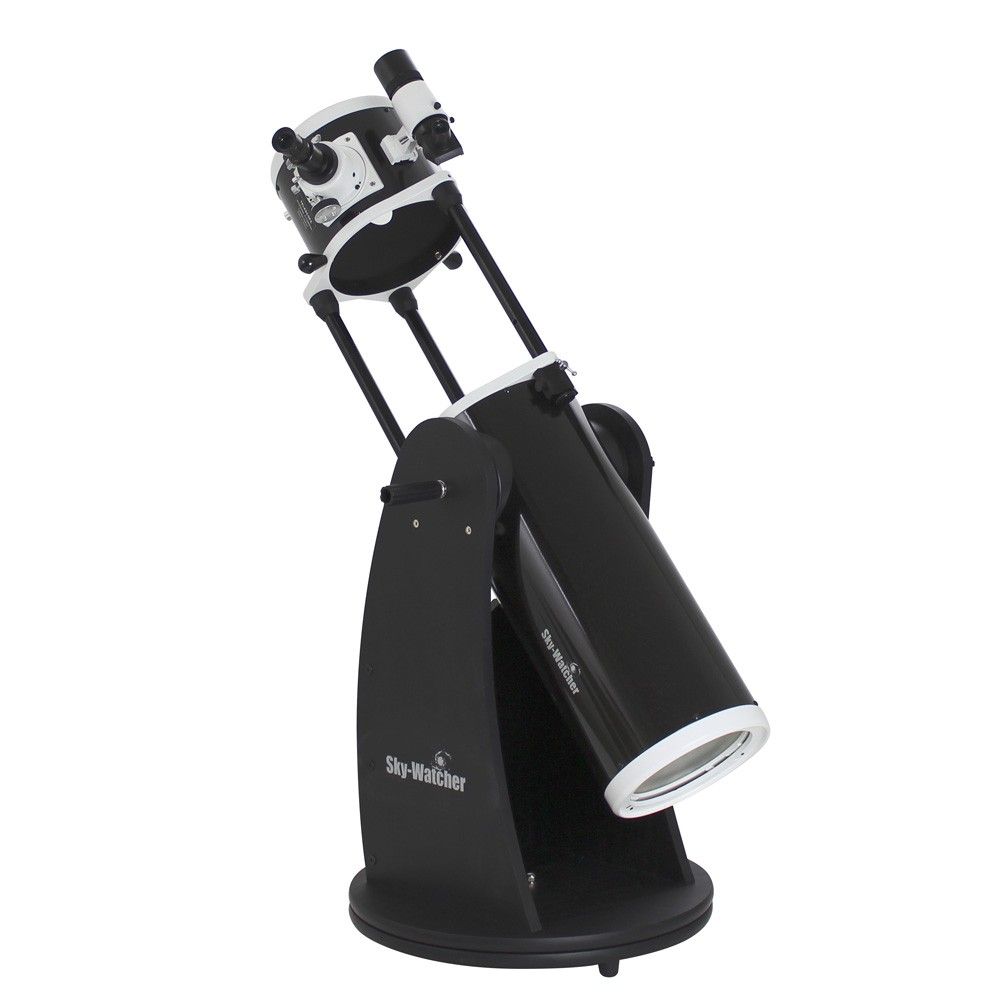 The Dobsonian mount weighs 26 pounds and assembles similarly to IKEA furniture; it can be packed flat if need be (though doing this too much could wear out the threads/screws).

A person can easily move the entire assembled telescope in one piece.

Assembling the mount out of the box is pretty simple. You screw together the base with the included hex wrench, plop the tube on the base, tighten the altitude bearing clutches, and you’re done.

The 8” Collapsible’s 9×50 right-angle finder shows a lot more stars than the naked eye and even some of the brighter deep-sky objects directly, but can be confusing to use to aim the telescope. 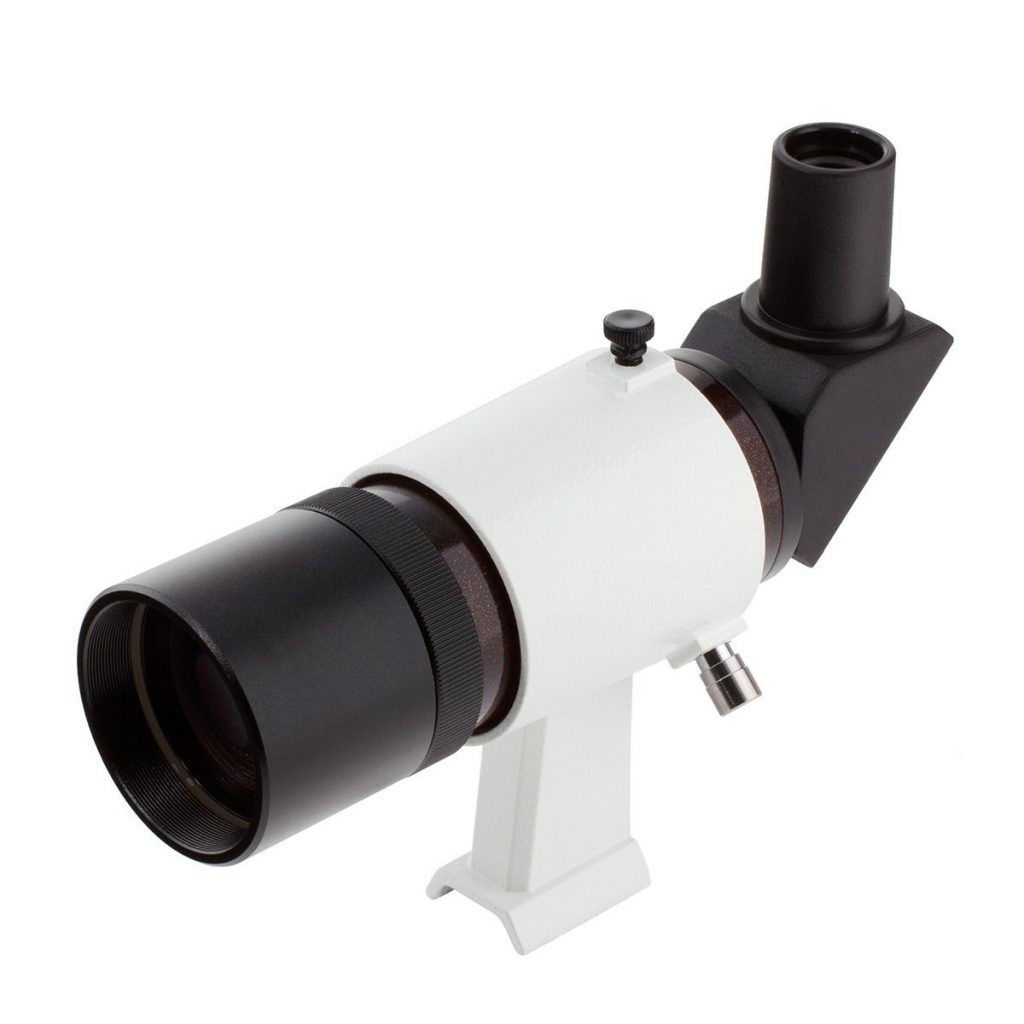 If you’re having trouble using the 9×50 to initially sight down the tube, other finders can easily be swapped in but we’d recommend simply purchasing a reflex sight such as the Telrad or Rigel Quikfinder and attaching it to the telescope tube next to the original finder. The reflex sight will allow you to initially aim at your targets and the 9×50 can then be used to dial in your exact positioning. 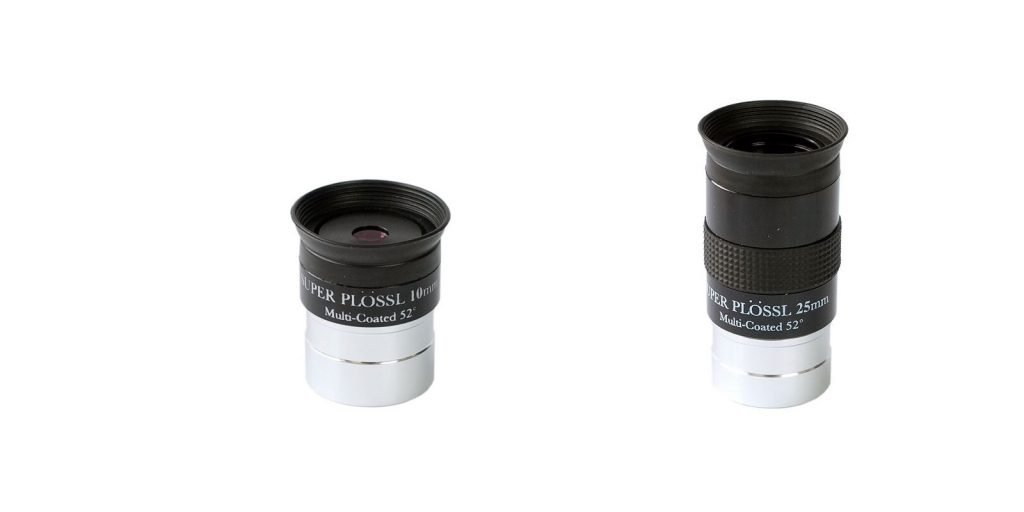 Typically, you’ll want to use the 25mm eyepiece to hone in on targets, and in the case of many deep-sky objects you don’t typically have a need to switch to higher power. For the Moon, planets, globular clusters, double stars, and planetary nebulae, switching to the 10mm eyepiece for 120x is more appropriate.

However, this is far from maxing out the scope’s capabilities, and you can buy aftermarket eyepieces for additional magnification options.

A 6mm “gold-line” eyepiece, for instance, will provide 200x, which is useful on bright/small targets even on nights of mediocre seeing. A 4mm or 3mm eyepiece will provide 300x or 400x respectively which can come in handy on the most still nights.

The included eyepieces do not meet 8″ Collapsible’s potential.

A 30mm or 40mm wide-angle 2” eyepiece will give you a wider field of view and lower magnification than the included 25mm, making it easier to find targets as well as fit wide objects such as the Andromeda Galaxy in the field of view. 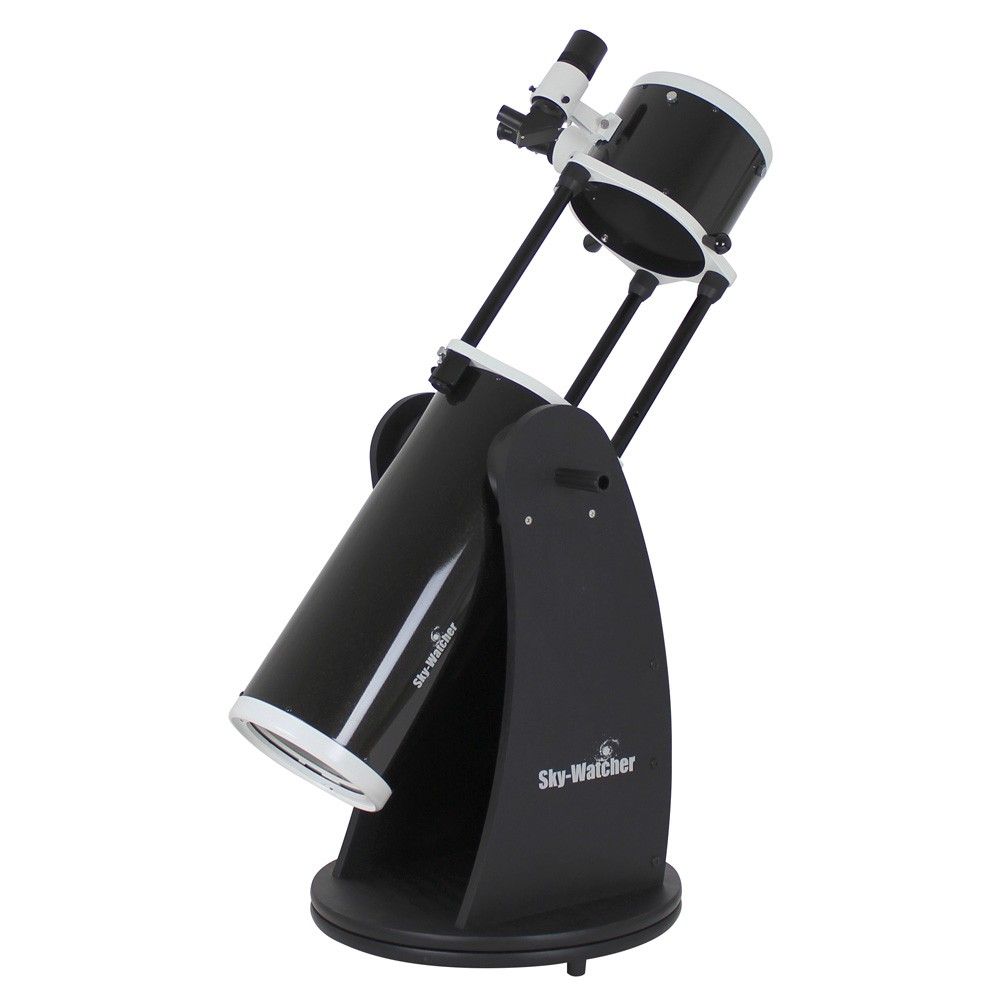 The bearing design and the simple nature of the open collapsible tube are the main disadvantages.

Unlike other commercial Dobsonians, which use either spring-tensioned bearings or adjustable bearings that can slide back and forth to balance the telescope precisely, the Sky-Watcher Dobsonians use fixed altitude bearings that are rather small in diameter.

. This means that a heavy eyepiece, finderscope, or other accessories will make the telescope top-heavy and cause it to tip downward unless you lock the altitude bearings tight, which then makes fine motions difficult. In fact, the telescope by default is top heavy with the included finderscope and eyepieces!

There are balance issues with the included accessories.

The only remedy for the aforementioned is to add some sort of counterweight to the back of the tube, which can lead to the opposite problem when you swap eyepieces for a different magnification (though you can get around this somewhat by locking up the altitude bearings while you change eyepieces). 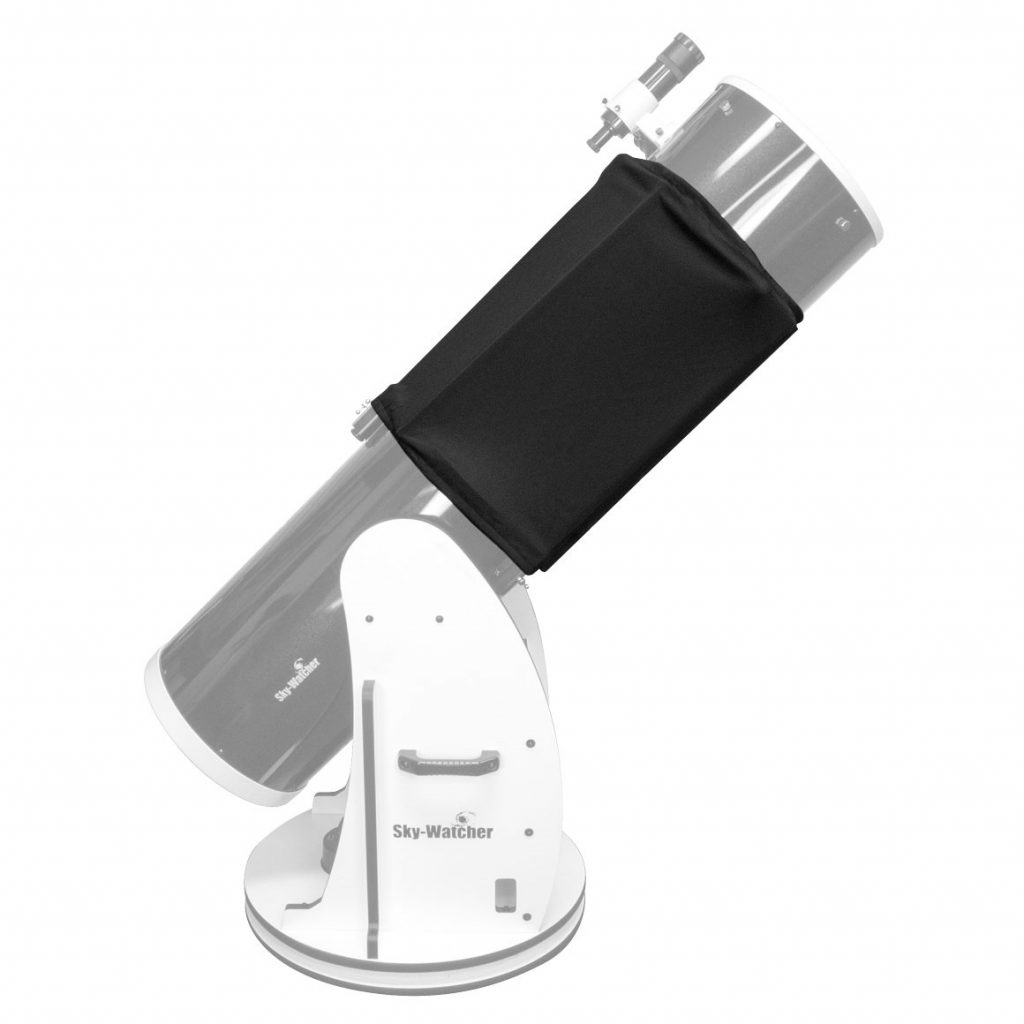 The other major disadvantage is simply the nature of the collapsible tube. You’ll probably need to collimate this telescope slightly more often than a solid-tube Dobsonian such as the Zhumell Z8, and the open tube lets in stray light which can affect contrast as well as moisture which can lead to dew on your optics.

A light shroud is almost a necessity.

This can be remedied with a light shroud, which can be purchased or sewn at home – though it’s an additional component and expense to reckon with.

The Sky-Watcher 8” Collapsible is a solid choice for the beginner or experienced amateur provided you’re willing to deal with the mild inconveniences of the collapsible tube and simplistic mounting. We certainly recommend it.