Meade StarPro 90AZ is what a starter telescope should be.

StarPro 90AZ is one of the best beginner refractors, and this is not an easy title to earn.

Every model on the market has a certain weakness. Some of them have wobbly mounts, some have low powered optics and some have ridiculously bad accessories.

StarPro 90AZ doesn’t only solve these problems; it excels in these areas. It has great optics, a mount that is one of the bests in the budget price range, and useful accessories in contrast to most other models.

Don’t get me wrong. You are going to get a budget, beginner level refractor. But you can be sure not a single dollar is wasted if you get the StarPro 90AZ. 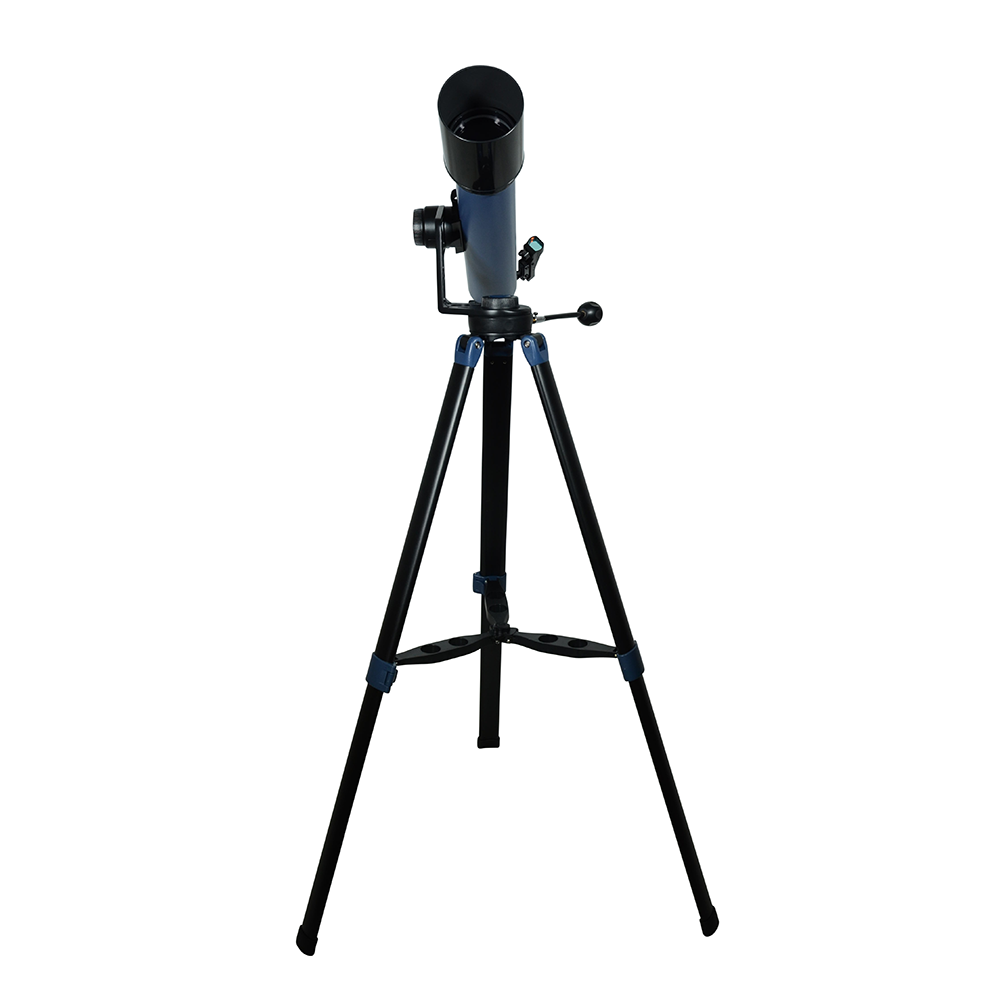 Let me start out by stating that the optics are not that powerful. In fact, they do not provide a better image quality than a 114mm tabletop. But tabletops, as you might understand from the name, don’t come with tripods and require regular maintenance. Although refractors provide slightly worse image quality and stability, they are far more convenient than any tabletop or Dobsonian.

A refractor is easier to use than a reflector.

StarPro 90AZ has enough optical power for viewing popular space objects in some detail. These include moons of Jupiter, The Great Red Spot, Rings of Saturn, Polar Ice Caps on Mars and phases of Venus. You are going to get a mesmerizing amount of detail on the Lunar Surface.

Deep space performance is pretty good, as well. Exceptionally bright star clusters, galaxies and nebulas look rather detailed and contrasty. Some of the objects you will be able to view are Pleiades Star Cluster, Orion Nebula, Andromeda Galaxy and Hercules Star Cluster. 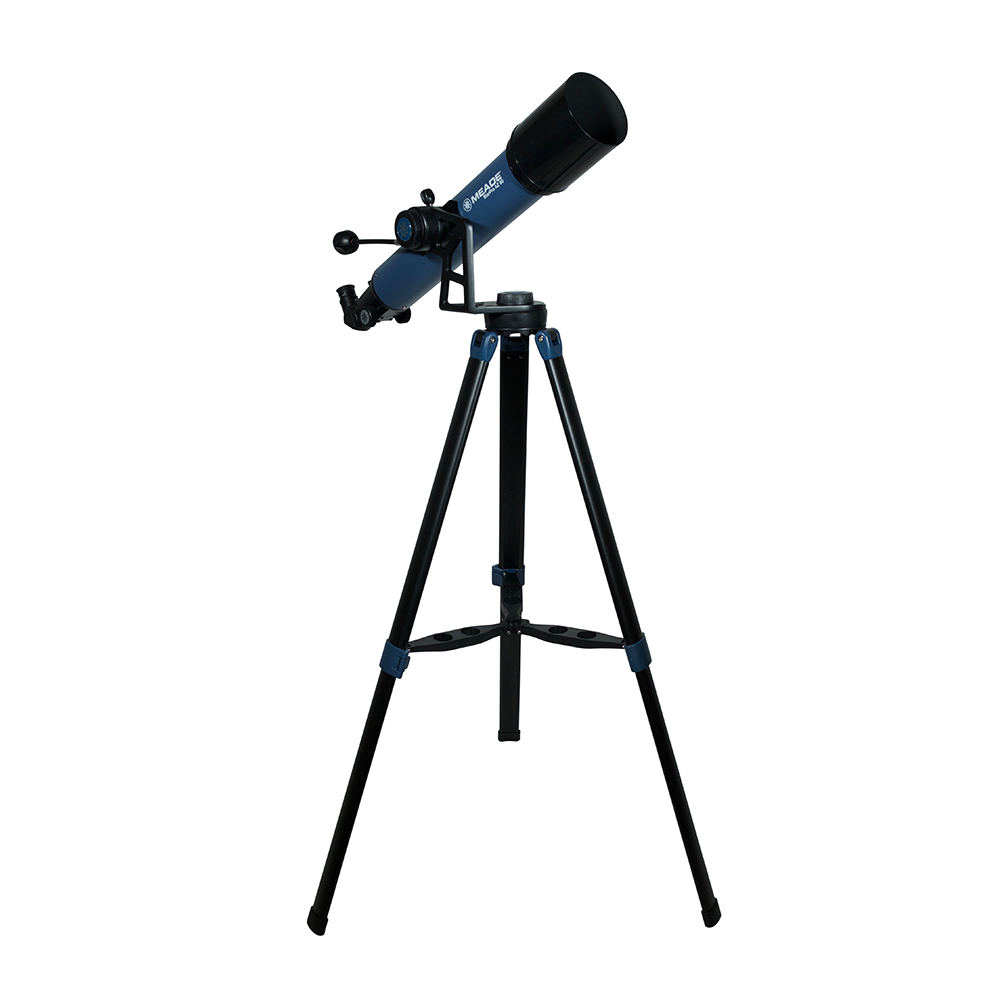 Chromatic aberration is a problem.

The main problem with the optics of StarPro 90AZ is chromatic aberration. If you don’t know what that means, it is a colorful halo that appears around bright objects. A longer optical tube solves the problem, but it also creates instability with the mount.

I would prefer a stable observation over a lack of chromatic aberration every day. StarPro 80AZ, for example, has a longer optical tube. But it is so wobbly observations become frustrating after a while.

Overall the optics are ideal for a first-timer, or anyone who is interested in astronomy.

The mount has a unique design. Most budget telescopes have lots of plastic parts attached to each other to provide stability and smooth motion. The problem is, as long as there are a lot of plastic on plastic attachments, the mount will be wobbly. This the case with every budget telescope that comes with a tripod. It is clear that Meade is aware of this problem, and tried to solve it with StarPro series. They have reduced the number of parts in the mount significantly and created a singular attachment between the optical tube and the tripod.

The mount is better than any I’ve seen.

The result is much better than any other budget telescope I’ve seen. The motions are smoother, and the optical tube is much more stable. The slow-motion control knobs work pleasantly, and the tripod is sturdy enough to carry the load.

The tripod is too short for most people.

The only problem with the base is its height. It is too short for most people. If you are 6″ (180cm) long or higher, you will be in an uncomfortable position while observing. Especially if you are trying to observe objects that are higher than 70 degrees in the night sky.

This problem may be solvable with a stool or some kind of a platform under the telescope. If you ask me, I would prefer a shorter, sturdier mount than a taller, wobbly one. 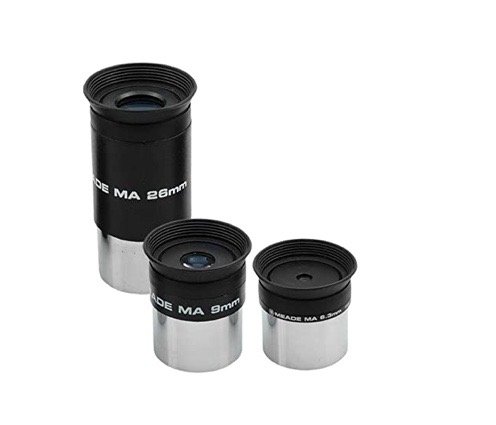 The accessories are the same as most other budget telescopes. Meade sends three Kellner eyepieces with the telescope that have 6.3mm(96x),9mm(67x), 26mm(23x) apertures. The 6.3mm eyepiece is hard to use and focus. The 9mm and 26mm eyepieces are usable and provide a decent enough image. But I strongly recommend getting a 15mm Plössl eyepiece; it will improve image quality by a huge amount. 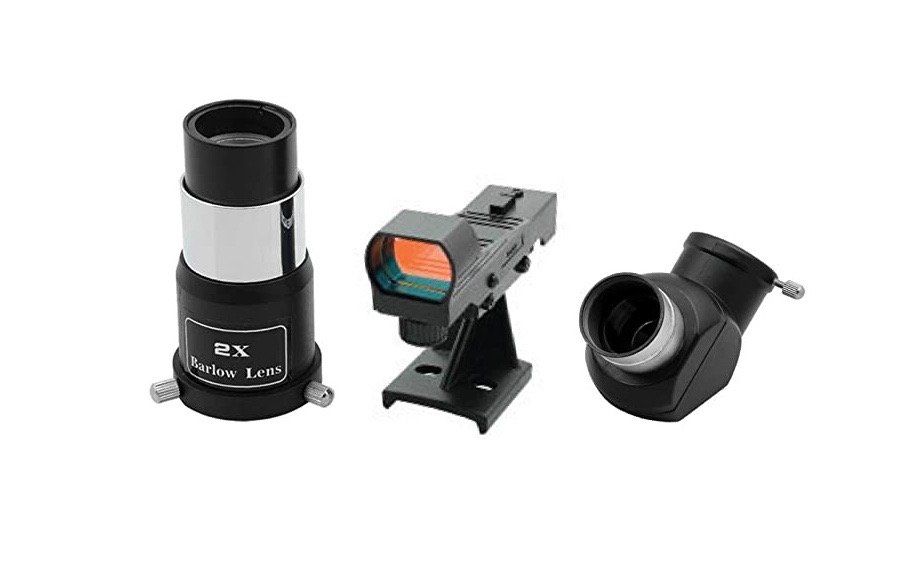 The diagonal that comes with the telescope is a cheap amici. It is common among budget telescopes, but it lowers image quality. It creates a spike in the middle of the image when used with the 26mm eyepiece and increases the blur and lowers the brightness. A star diagonal would be much better, but naturally, it is more expensive.

The red dot finder is as easy as it gets. It is just a red dot on a screen. I would prefer a red dot over any scope type finder since they are easier to align and more reliable.

The 2x Barlow should have been excluded from the package. It is made of plastic, and the lens inside is too small. It can provide a decent image with the 26mm eyepiece, which will provide 46x magnification. But I would use the 9mm eyepiece to get a 67x image instead of using the Barlow.

The focuser is, disappointingly, mostly plastic. I would have expected a metal focuser at this point, but the plastic focuser doesn’t raise any problems in terms of stability and smoothness, so I am willing to give it a pass. 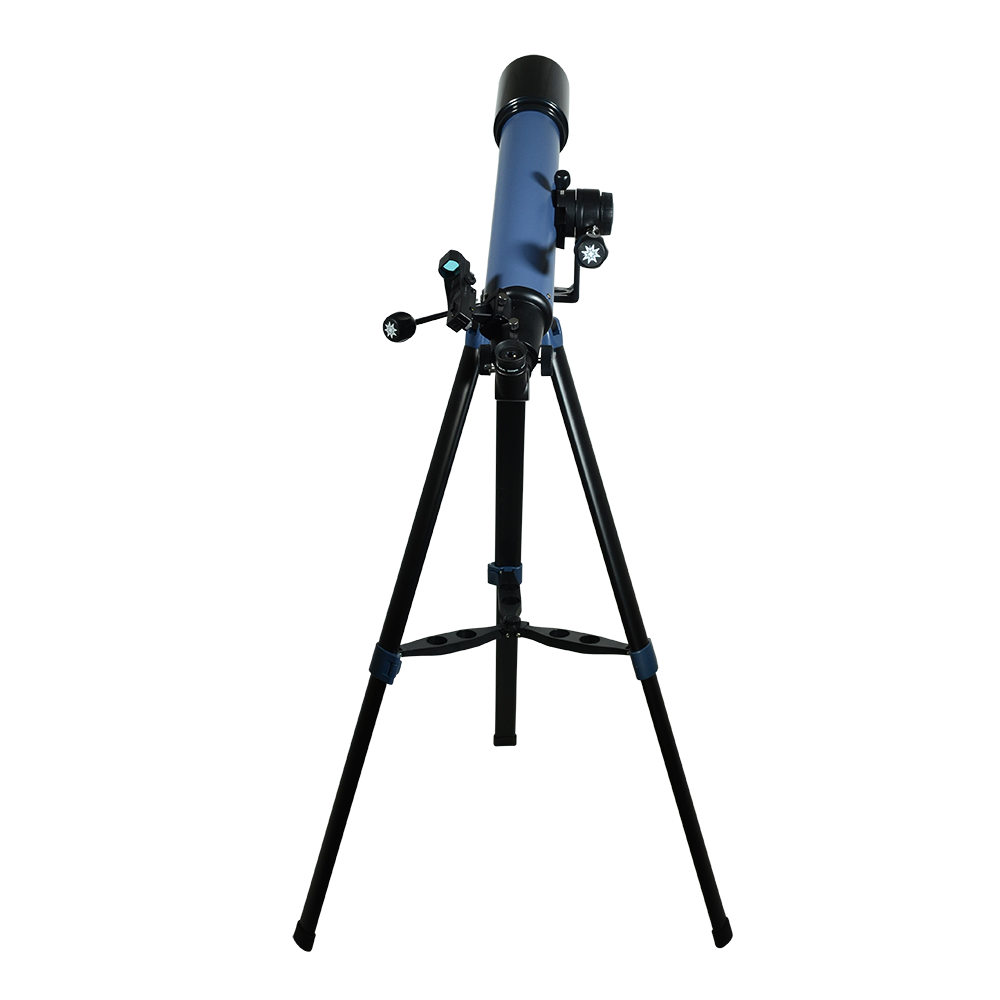 The chromatic aberration problem is a deal-breaker for some people.

The base is too short.

The Barlow lens is unnecessary.

All the problems that come with StarPro 90AZ are minor and solvable. StarPro 90AZ is, without a doubt one of the best starter refractors. The innovative mount that comes with it is the main reason for that, but the optics and useful accessories help with its title as well.