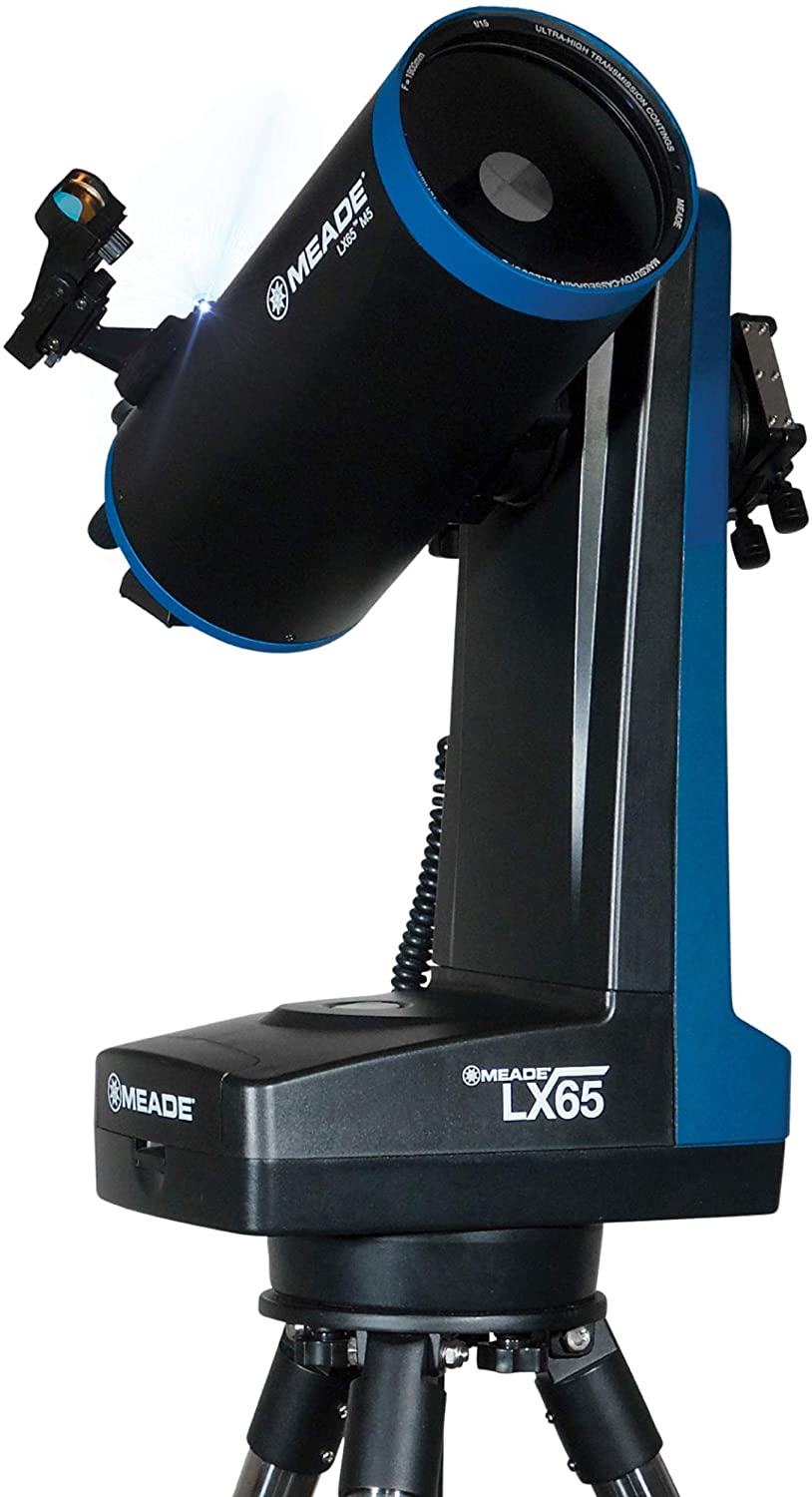 Meade LX65 5″ is delightfully sturdy and has faultless optics, but it is equipped with 30-year-old, unreliable tech.

Meade has managed to get the basics right with LX65 5″. The motors are metal and stronger than any other digital telescope at its price range. The tripod is sturdy. The optics are phenomenal.

But, Meade LX65 5″ doesn’t have the upgrades that Celestron NexStar SE Series have had for years, and the build quality of the mount is not reliable.

Let me explain with a comparison. These telescopes are sold at the exact same price and have identical optics. 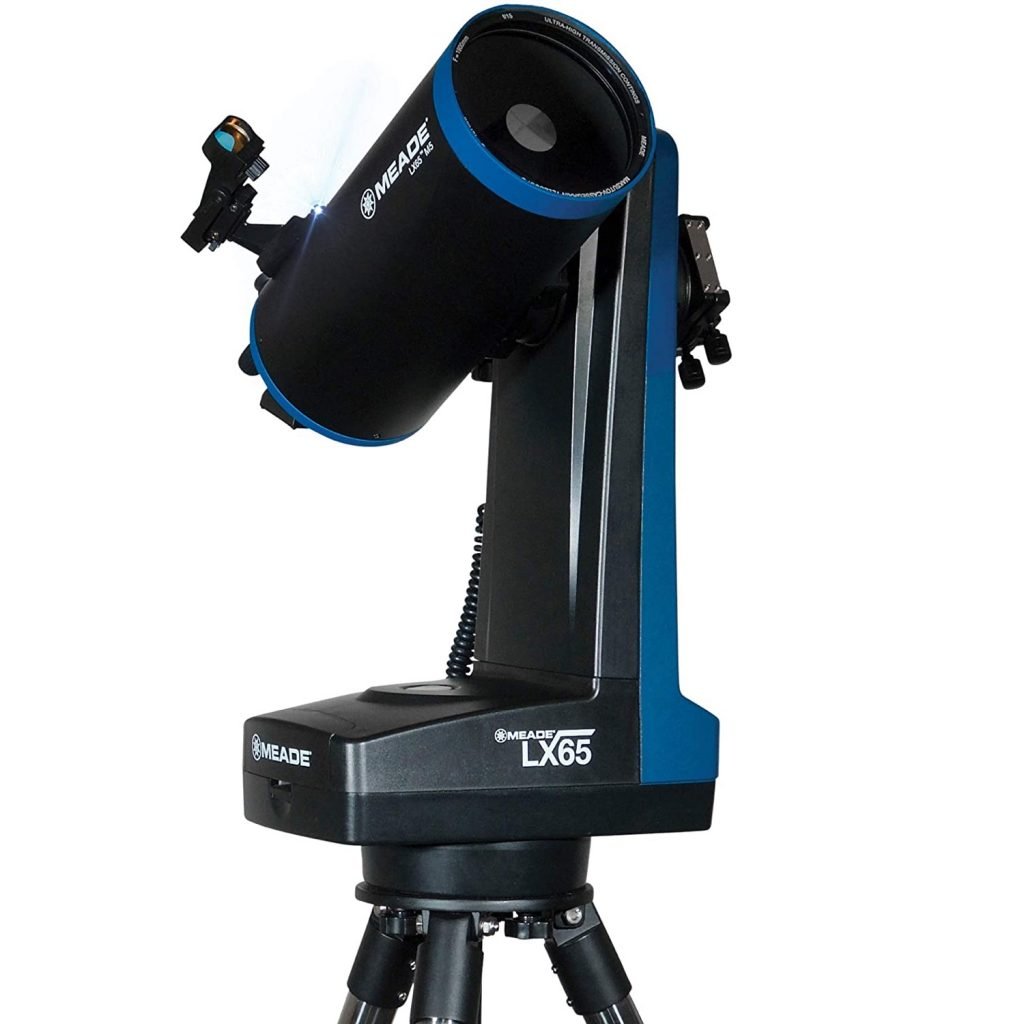 Celestron has enhanced the NexStar SE Series with excellent upgrades such as StarSense, SkyPortal App, and NexStar Wedge.

LX65 5″ lacks features that NexStar 5SE has had for years.

These are lifesaver upgrades, and Meade LX65 doesn’t have any of these. Although there are third-party apps that can be used with the LX65, they aren’t as good as the SkyPortal App.

Celestron also solved the reliability problem with superb customer service and a large user base. Even if the telescope breaks down, your problem is solved by the online community or customer service.

Meade’s customer service is slower, less responsive, and thier user base is smaller.

As a result, although the basics are identical, Celestron NexStar 5SE proves itself to be superior. You get a little less robustness for the exact same price, but better technology and a more trustworthy telescope.

Still, Meade LX65 is worth an in-depth-review due to its secondary slot for a light-weight telescope. None of the other models have this, and it is a smart way to enhance your viewing experience. But let’s start with the optics first. 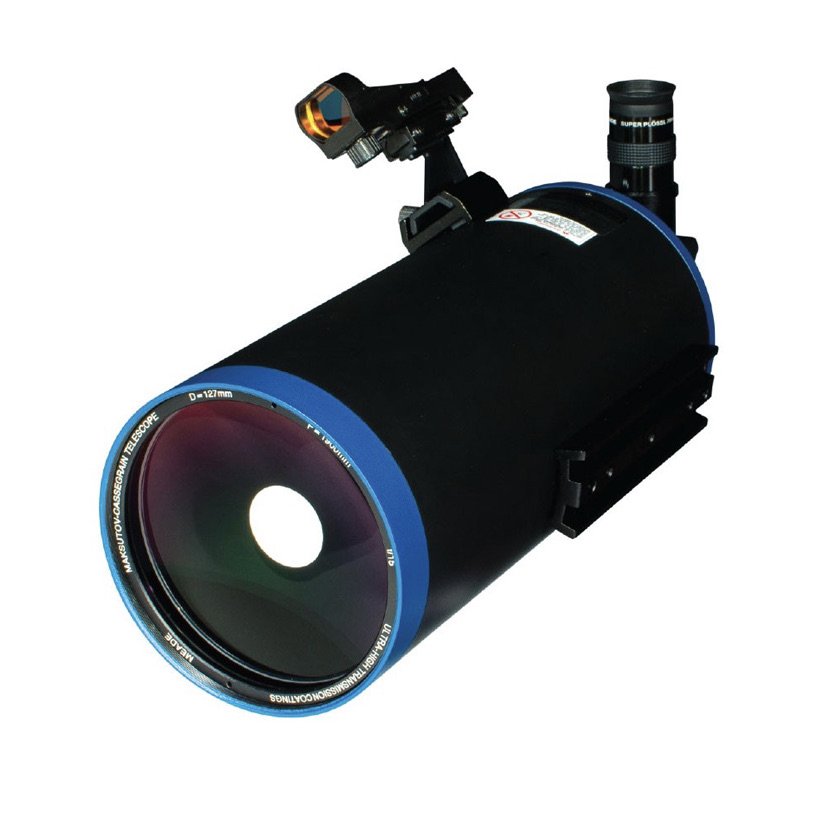 The optics are phenomenal, and they have been so with Meade telescopes for years. They nail the optical tube engineering every time.

The field of view is as narrow as it gets.

The optical design is a Maksutov-Cassegrain. The light travels the optical tube two times instead of one, and as a result, the field of view is significantly narrow.

The focal ratio is 15, which is exceptionally high for any telescope. Although it performs great with planets, bright star clusters, and the Moon, deep space objects aren’t observable without a Focal Reducer.

With a focal reducer, you can achieve an all-rounder performance with Meade LX65 5″.

Is Astrophotography possible with Meade LX65 5"?

There are mainly two types of astrophotography, planetary imaging, and deep space imaging.

But, deep space imaging is not possible, or in other words, very challenging. You need much longer(at least 15-20min) exposure times with deep space objects.

Only planetary imaging is possible with LX65 5″. 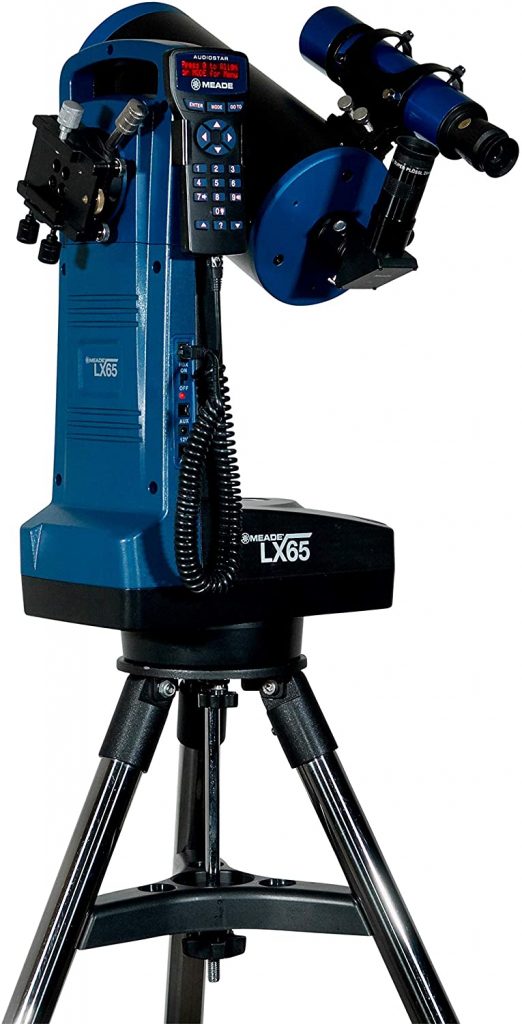 The mount is an admirable attempt, simply because of its sturdy insides.

Yes, the outside is plastic, but who cares about the outsides? The metal motors and connections inside the mount create a firm structure that can last for years.

But as I’ve mentioned before, the build quality is vital. The telescope breaks down; the motors are disturbingly loud at times, and the customer service is not responsive. These are deal-breakers. 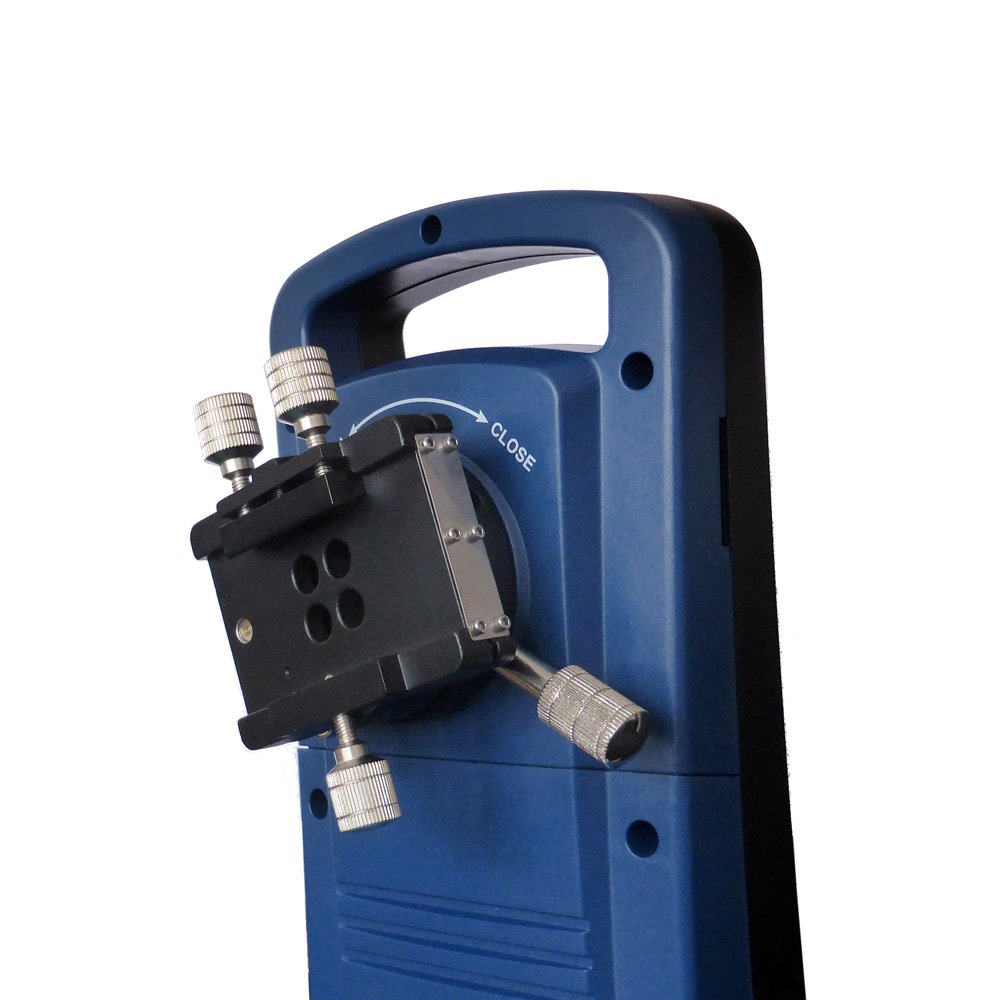 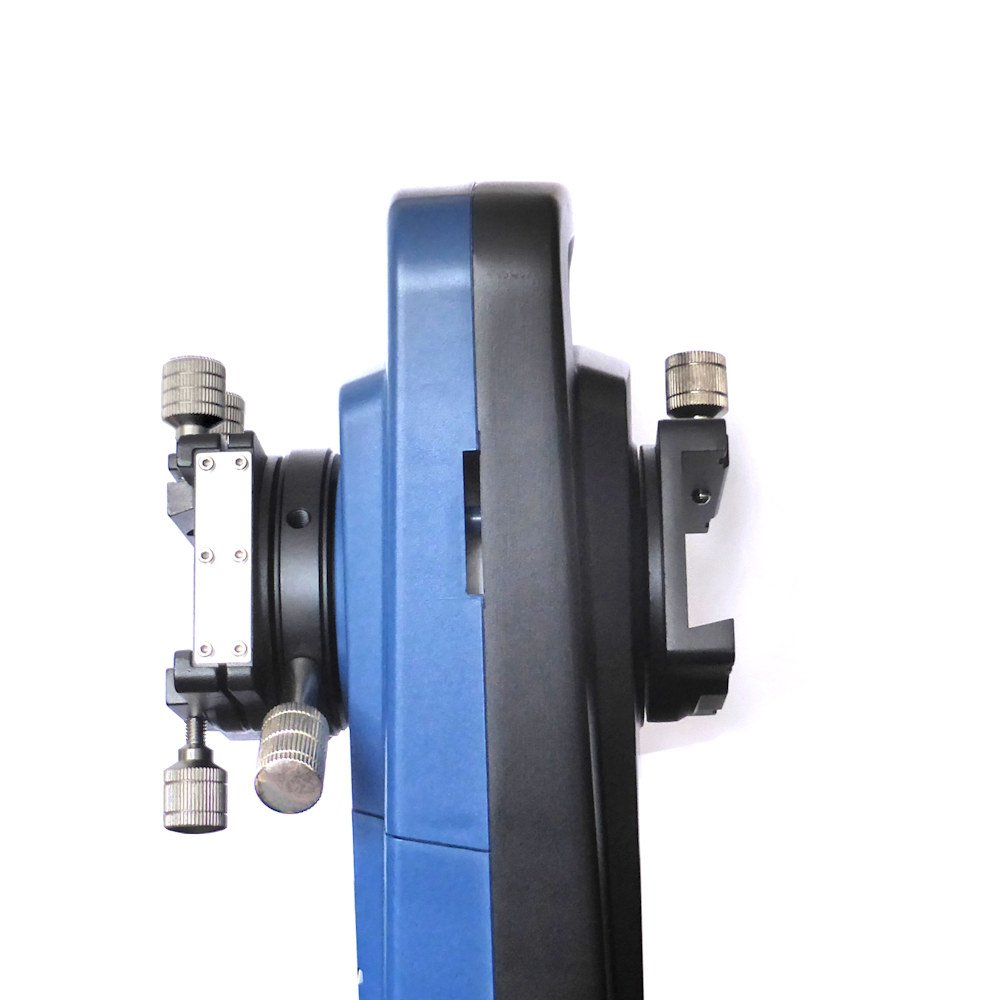 The second slot can easily carry a short refractor.

As a result of the strong insides, Meade included a second slot for a light-weight telescope to the mount. This is the only thing LX65 5″ does as “extra”, but it is absolutely appreciated. You attach a short refractor to the second slot or a heavy finder, and you can get both a wide and narrow field view of the image.

But, Meade has a major problem with the ports in the LX65 Series. 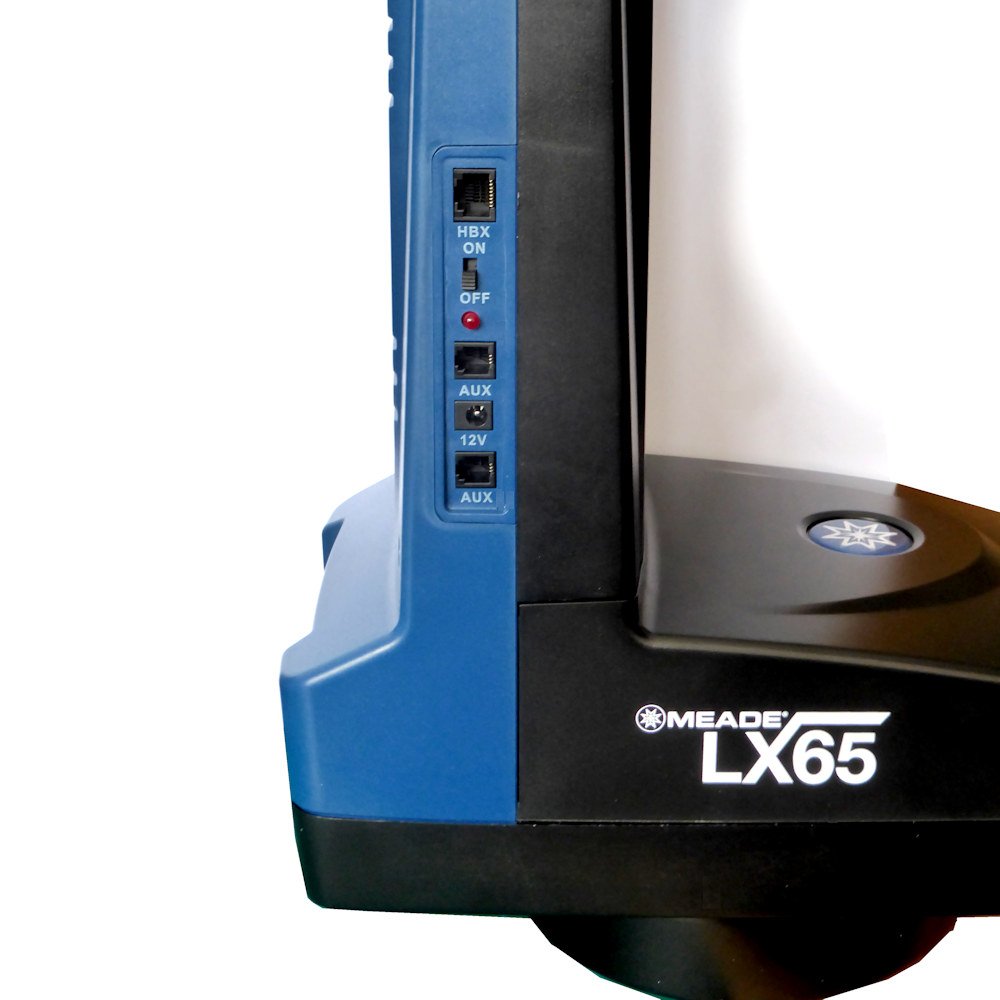 The aux ports are wired in reverse in some of the models and can cook up the mount. Although Meade has solved the problem with the new models, why should anyone take the risk?

They even won’t replace the telescope since they claim that there are no specialized Meade accessories for that port, so there is no need to use them.

This should be a deal-breaker for most astronomers. These telescopes aren’t cheap, and for this price, these silly problems aren’t acceptable. 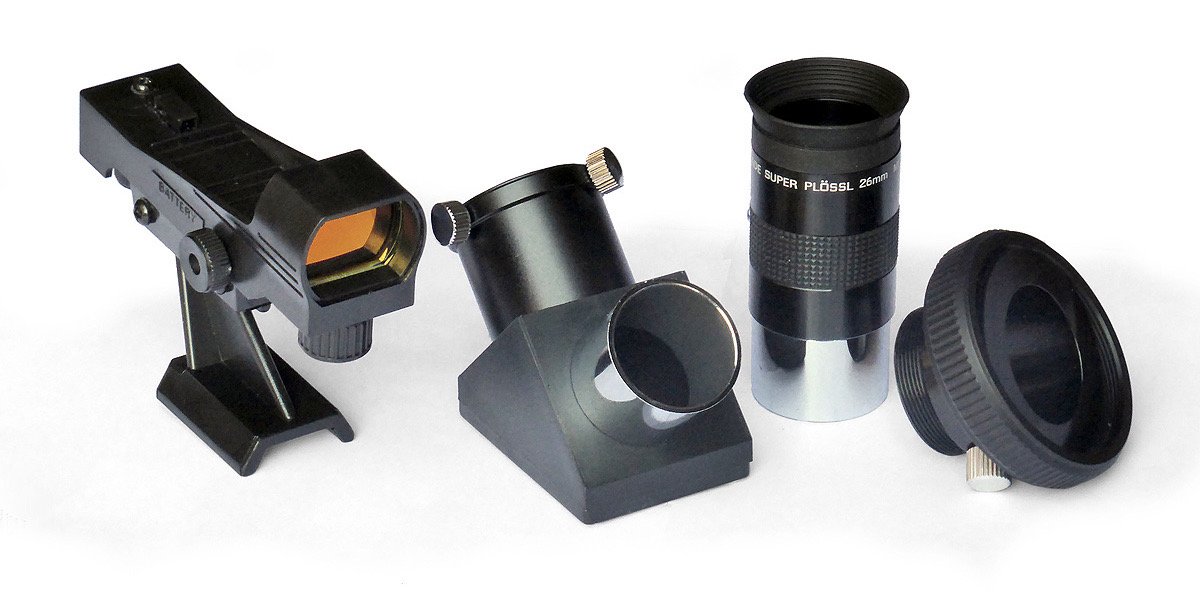 Let’s start with the focuser since it is the most important accessory and is not upgradable. Meade did a fantastic job. The focuser is all-metal, precise, and feels robust.

The other accessories that come with the telescope change depending on where you buy the telescope, but as a standard Meade sends a 26mm Plössl Eyepiece, a red dot finder, and a 1.25″ Diagonal. They are all “average” at best accessories and should be upgraded as soon as possible. 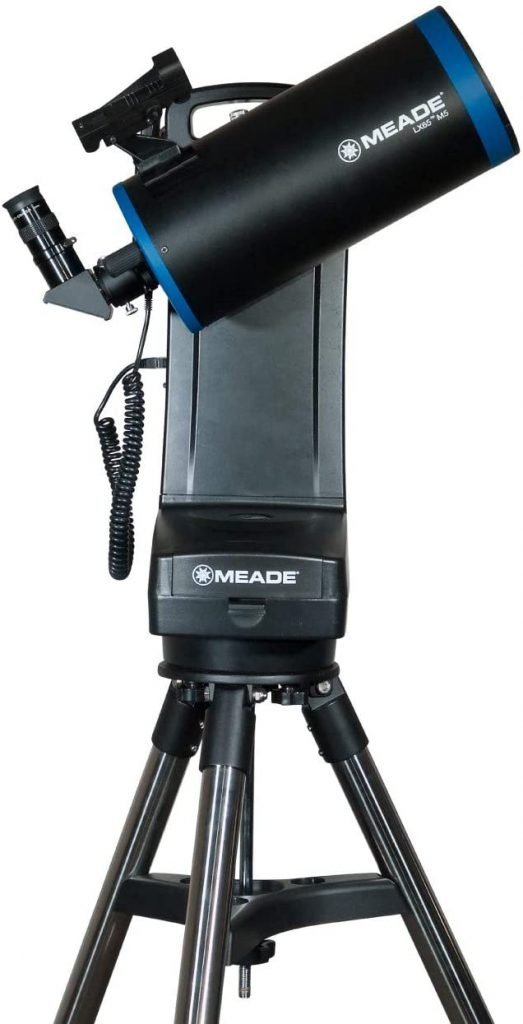 Meade LX65 5″ could have been great if not for its Aux Port problem, unreliable build, and poor customer service. As a result of these problems, Meade couldn’t create a large user base for the LX65 Series, and it lacks upgrades the other computerized telescopes have.

A telescope is something you will use for years. It is not a small investment, and as a result, any astronomer would expect a reliable build quality and great customer service. Meade LX65 5″ doesn’t have these.

I recommend the NexStar 5SE instead of the LX65 5″. It has much better upgrades, is more reliable, has better customer service, and costs exactly the same amount.