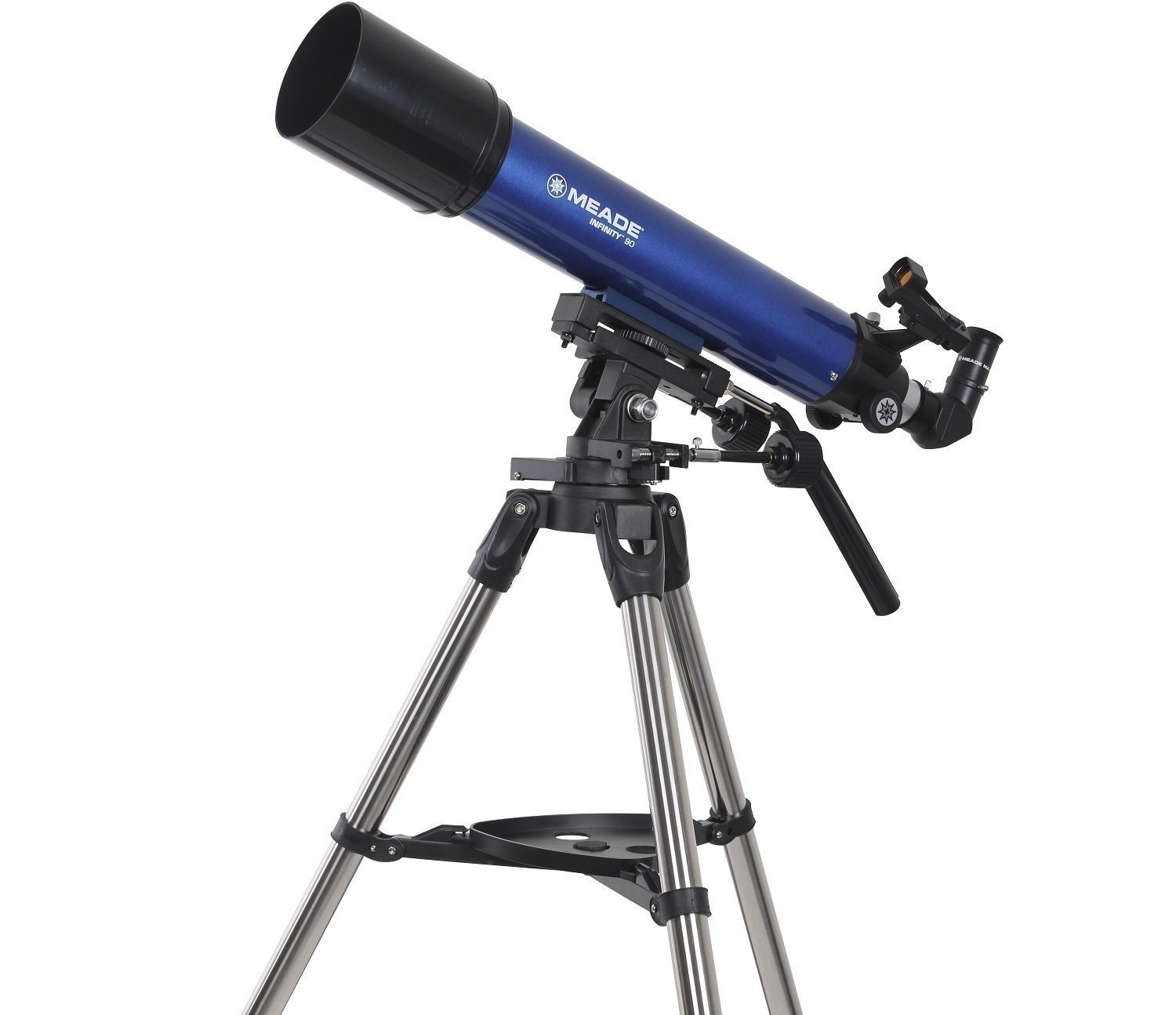 Meade Infinity 90 is one of the best refractors at its price range, if not the best.

The 90mm is not the largest aperture, but it gathers enough light for major celestials. Jupiter and its 4 Galilean Moon’s, Rings of Saturn and its largest moon Titan are easily visible. You will also get detailed and bright images of the Moon. The reason this telescope has great performance with planets and the Moon is because of its long focal length. It greatly reduces chromatic aberrations and gives beautiful performance around mid-range magnifications. (50x-75x)

Deep space objects are also detailed thanks to the long focal length. The 90mm aperture will not allow you to see dimmer deep space objects but major and brighter ones such as the Pleiades Star Cluster or the Orion Nebula are mesmerizing. You can also get great views of the Andromeda Galaxy and Perseus Double Cluster. As long as the object you are trying to see is bright you will get a pretty good image of it.

The alt-azimuth mount is mostly plastic, but it does the job. It simply moves up, down, left, right and has knobs for slow-motion on each axis. The tripod is stable and feels solid. It is much better than most tripods that come with budget telescopes. The only complaint we have about the base is that it is hard to move the optical tube completely upwards. Slow-motion knobs get in the way. But this is a minor defect.

The eyepieces that come with the telescope are cheap versions of Kellner’s. They have 26mm(23x), 9mm(67x) and 6.3mm(95x) of apertures. They are actually pretty good considering the price of the telescope. They are quite sufficient in the beginning, but of course, changing them with better ones such as Plössl’s is a good idea.

The included red dot finder is quite simple to use. It is a standard among budget telescopes and proves to be very useful.

The focuser is metal and has a rack-and-pinion design. It is 1.25 inches and will work with any 1.25-inch eyepiece. As you might guess it works well. It is smooth and solid.

Meade Infinity 90 is a great telescope for beginners. Its performance with planets and the Moon is quite amazing. If you are concerned about deep space more than the Solar System, we recommend a telescope with a larger aperture. Such as the Heritage 130P or Zhumell Z130.

If you decide to buy Meade Infinity 90 there is a helpful video to help you set it up. 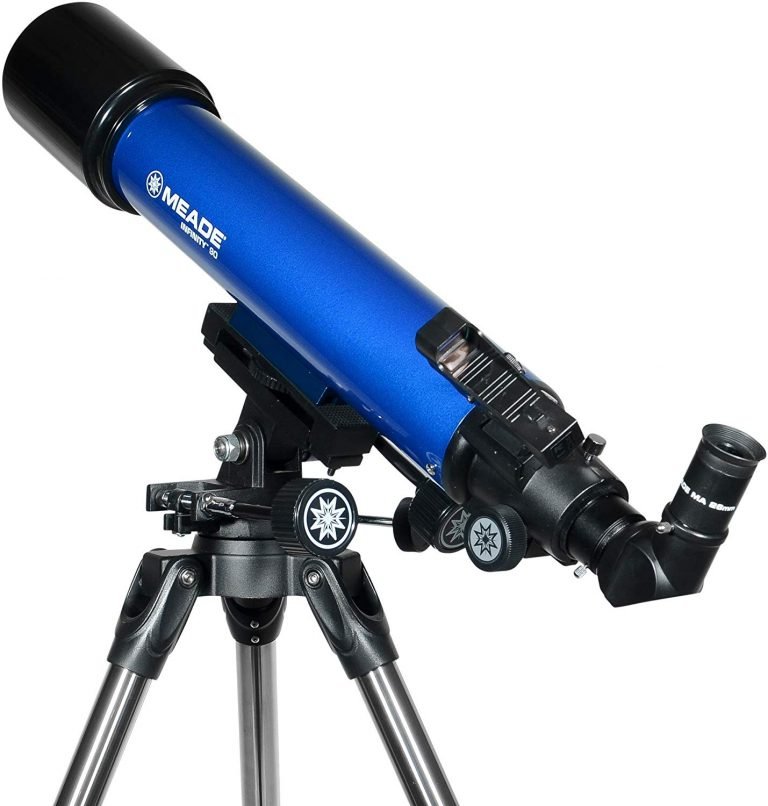 There are a few things that make Meade Infinity 90 a pretty good choice. It has great planetary and Lunar performance. Its build quality is solid and it is extremely portable. It is unquestionably one of the best telescopes in this price range.

As we’ve said optics are one of the reasons why we think this telescope is a good choice. The f/6.7 optical ratio is quite rare. It surprisingly creates a great balance between magnification and aperture. It gathers enough light for major celestials such as Jupiter and Saturn. You will be able to see moons around Jupiter and The Great Red Spot, rings of Saturn quite distinguishable from the planet and amazing detail on the Moon.

The long focal length greatly reduces chromatic aberrations. They are much less effective than with the Meade 80 and Meade 102. Another reason why the f/6.7 is great for planets.

The performance with deep space is arguable. It is absolutely amazing with bright objects such as the Andromeda Galaxy and Orion Nebula. But 90mm is not enough for dim objects, so you won’t be able to see those. Especially if you are observing near a big city. So if you are buying a telescope specifically for deep space, we wouldn’t recommend Meade Infinity 90. Large aperture reflectors would be much better, such as Heritage 130P.

The eyepieces are modified versions of Kellner eyepieces. They are mostly plastic but the lenses are still made of glass. Their apertures are 26mm(23x), 9mm(67x) and 6.3mm(95x). Although the 26mm and 9mm are quite easy-to-use and average quality, the 6.3mm is very hard to use.

Considering the telescopes’ price the eyepieces are very good. They will be sufficient in the beginning. But we still recommend getting Sirius Plössl’s and a small aperture Goldline. 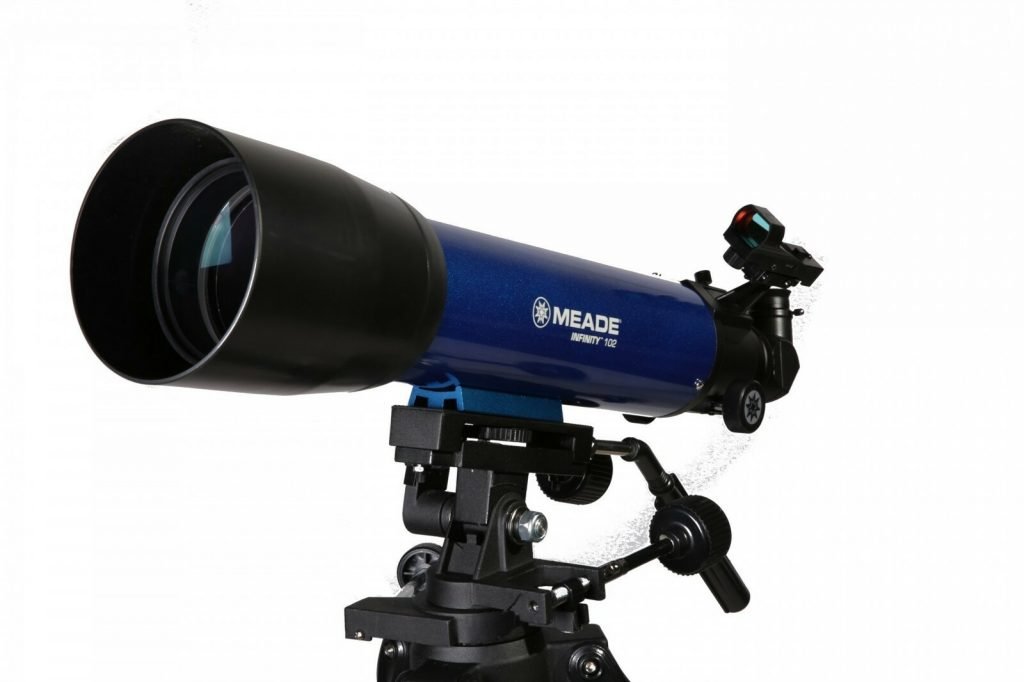 The mount is alt-azimuth, meaning it only moves up, down, left and right. It is quite easy to use. It has slow motion knobs for tracking celestials on each axis. Although it is made of plastic it works pretty well. Around low and mid ranges it doesn’t bring up any complaints. But around really high magnifications it is not as solid as you want it to be.

The tripod is quite sturdy. It is much better than other tripods that come with budget telescopes such as the EQ-2 or EQ-1. It is made of steel so we are pretty satisfied in this area.

The only problem is if you are trying to point the optical tube directly upwards the slow-motion knobs get in the way. It is a minor defect but worthy to keep in mind. 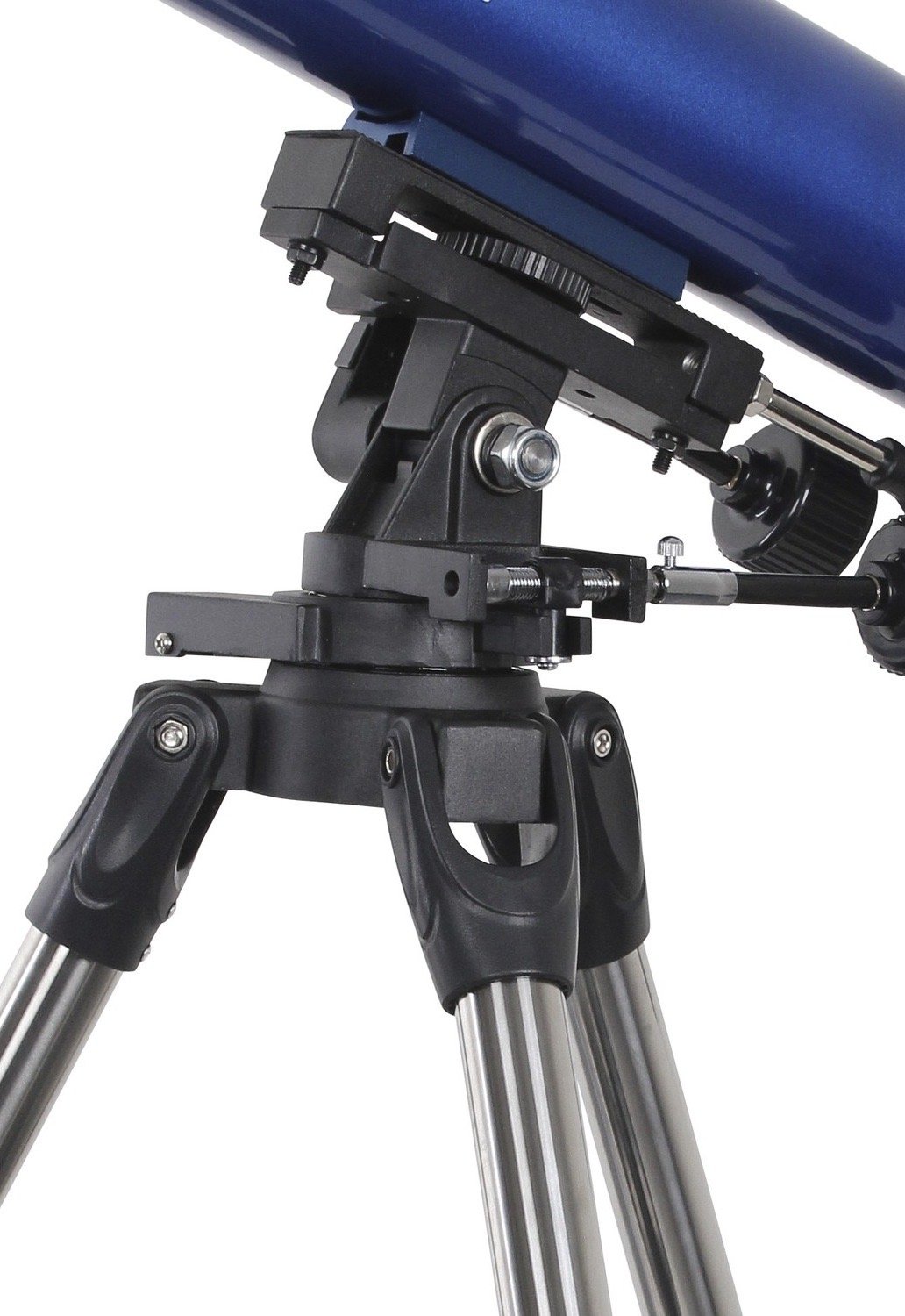 The red dot finder is easy to use and quite useful. For a 90mm beginner telescope, it is more than enough. But if you would like to change it with a better finderscope such as a 9×50 the slot is a standard size, so you won’t have any problems with that.

The focuser is one of the best parts of the telescope. It is a rack-and-pinion and it is metal. Most focusers around this price range are mostly plastic. Therefore a metal focuser is really appreciated. It provides smooth motion and works well with any 1.25-inch eyepiece.

The 90-degree prism that comes with telescope corrects the images’ rotation and saves you from bending over to look through the scope. But unfortunately, it dims the image quite a bit and creates diffraction spikes. So we recommend using it for terrestrial observation rather than celestial. Keep in mind that you can always get a better one.

The Barlow lens doubles the magnifications with any eyepiece. It works OK but certainly is not high quality. We recommend using a low aperture eyepiece instead of the Barlow if you want to go up to high magnifications. 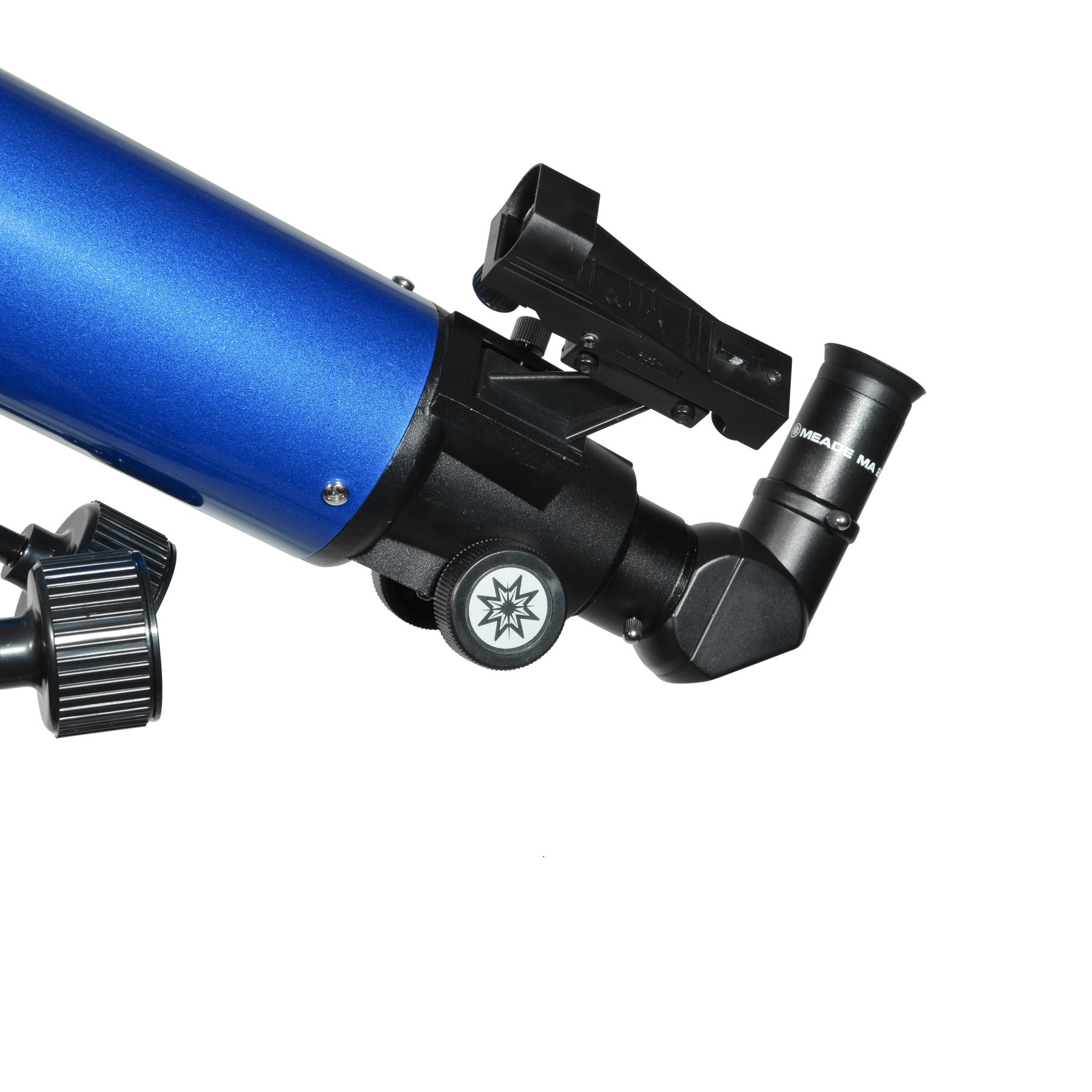 Although the accessories are sufficient for the beginning they need improvement. The alt-azimuth mount could be better at high magnifications.

We highly recommend Meade Infinity 90. It is a great performer for planets and the Moon. It also provides detailed images of deep space. The base is sturdy and doesn’t bring up any stability issues. If you enhance it with good quality accessories it has the potential to become an exceptional grab-and-go telescope.