Most of the astronomical objects’ names that we use today come from Ancient Greece. Orion, Centaurus, Pleiades, Pegasus, Andromeda… Even the planets in our Solar System are named after Roman gods. Mars is Ares, Neptune is Poseidon, and Venus is Aphrodite in Greek Mythology. So why does today’s astronomy have such a strong relationship with the Greek culture?

Homer and Hesiod, the two pillars of Greek Mythology, are one of the reasons why. In both poets’ creations, constellations were mentioned as mythical characters. Orion Constellation, for example, was on the shield of Achilleus in Illiad, which was made by Hephaistos. 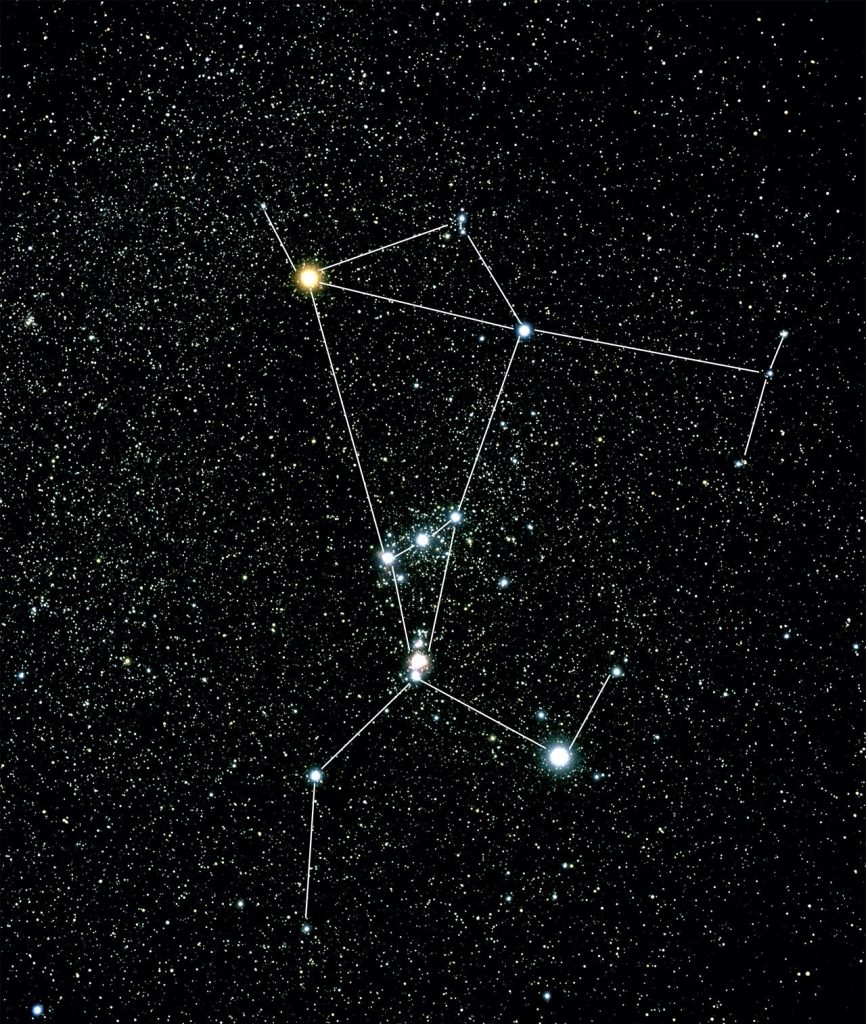 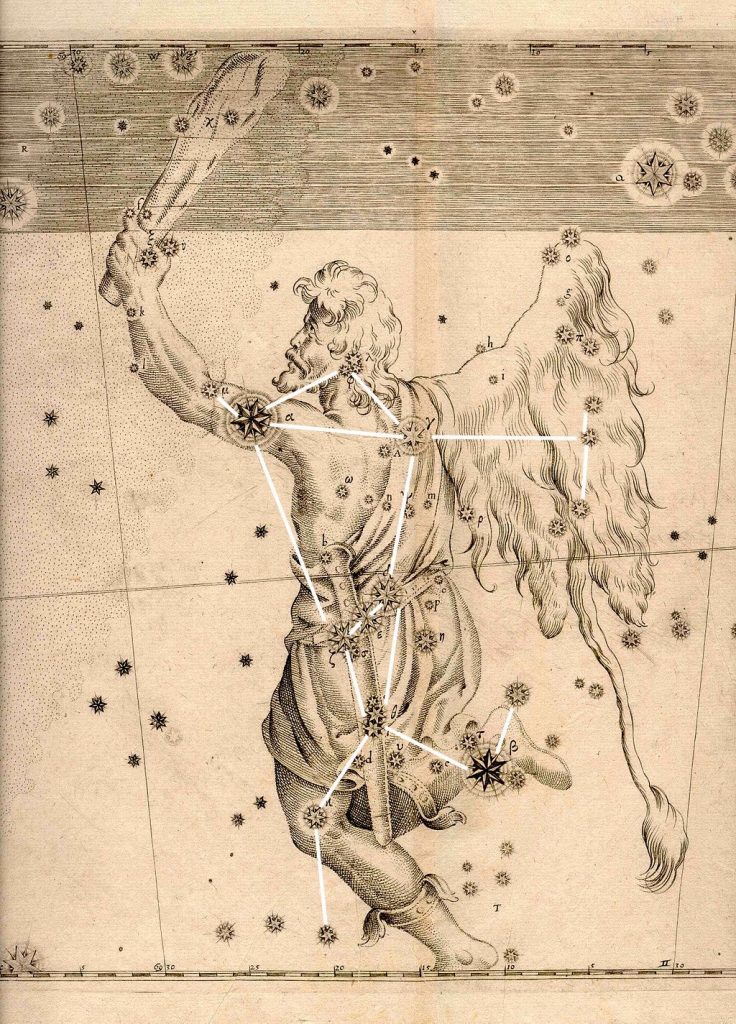 The Battle of Scorpius and Orion

Orion was described as a giant huntsman by Homer. He was arrogant and boastful, claiming he could hunt down any animal living. Gaia, titan of nature, got angry. She sent a giant scorpion to kill Orion. 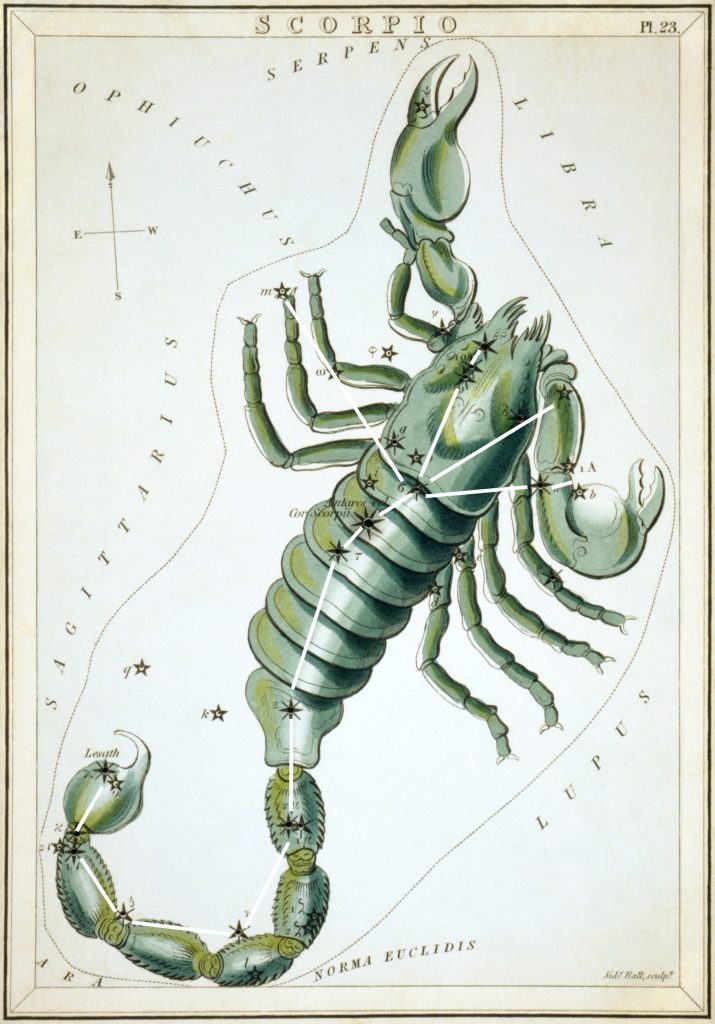 The battle between the two was such a vigorous one, Zeus, king of the gods, put them both in the sky as a reward. To this day, the giant Scorpius is still chasing Orion in the night sky. An endless battle between a giant and a monster. 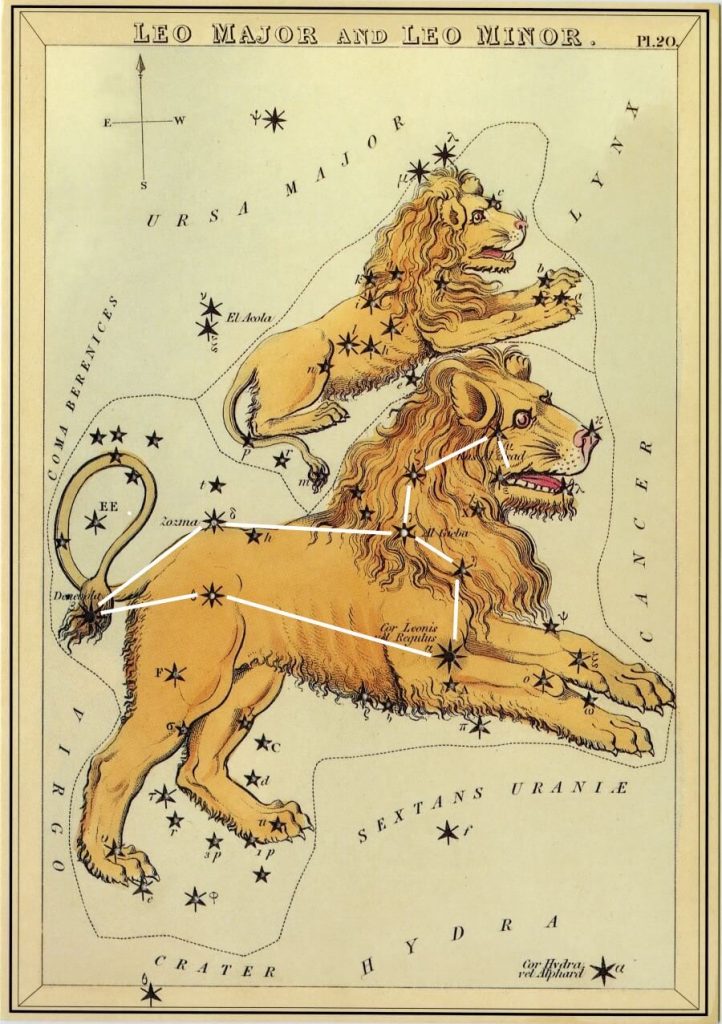 The Nemean Lion was a vicious monster that ravaged the area of Nemea. King Eurystheus ordered Heracles to kill the lion and free Nemea from the monster.

Heracles tracked down the lion and tried to kill it with arrows. But the lion’s hide was impenetrable. So he waited until the lion returned to his cave. He then caught the lion in its cave and killed it by strangling it to death.

He couldn’t skin the lion since its hide was impenetrable. Athena, seeing the desperate warrior, decided to help him. She told Heracles to use the lion’s claws.
Heracles skinned the lion and emerged as victorious. 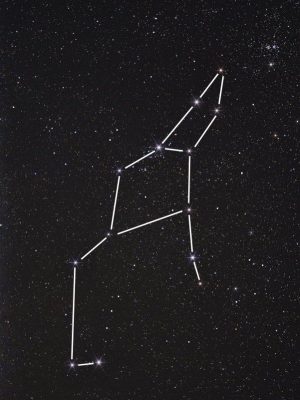 Perseus with the Head of Medusa

Perseus, son of Zeus and Danaë, had grown up on the island of Seriphus. King of the island Polydectes fancied Perseus’ mother, Danaë, but she refused him to look after Perseus.
Polydectes couldn’t handle the refusal. So he came up with a plan to kill Perseus. He persuaded him to kill Medusa, who lived inside a cave near Seriphus.

Perseus got on his way. While on his way, he prayed to gods by singing a song. The song was such a beautiful one, the gods decided to help him. Hades gave him a cap, which makes him invisible. Hermes gave him his winged sandals. Athena gave him a golden shield to use its reflection against Medusa. He also received a curved sword and a sack to put Medusa’s head in.

Perseus used the shield to guide himself inside the cave and killed Medusa in her sleep. He got her head and got on his way back home.

King Polydectes captured Perseus’ mother, Danaë, while he was gone. Perseus turned him and his supporters to stone using Medusa’s head. Europa, the beautiful princess of Phoenicia, was enjoying the seashore with her friends. Zeus saw Europa and fell in love with her. He turned into a handsome bull and approached Europa and her friends.

Lovely girls of Phoenicia stood in wonder of the handsome bull. They decorated it with flower crowns. Europa decided to mount the charming animal.

When Europa mounted Taurus the Bull, she actually mounted Zeus. Zeus took off rapidly into the sea and abducted Europa.

He took her to an island. He wooed Europa with gifts. They had 3 sons; Minos, Rhadamanthys, and Sarpedon. Princes Callisto was a daughter of King Lykaon. She was such a beautiful mortal Zeus fell in love with her. Callisto fancied Zeus as well, and thus their secret romantic relationship had started.

One day when Zeus and Callisto were walking in a forest, Zeus’ jealous wife Hera approached from afar. Zeus, knowing that she would kill Callisto on sight, turned her into a bear.

Hera called Zeus to Mount Olympus. Zeus had to leave Callisto in the form of a Bear.

Callisto’s son, Arcas, was hunting in the forest the same day. He saw her mother in the bear form and shot her in the heart. She immediately turned into her human form when she got shot. Arcas, seeing that he shot her mother, cried in pain.

Hera heard the cries from the forest. She knew her husband was cheating on her again. She got on her way to kill Callisto and her son, Arcas.

Zeus couldn’t let his love die. He turned both Callisto and her son into stars in the sky. 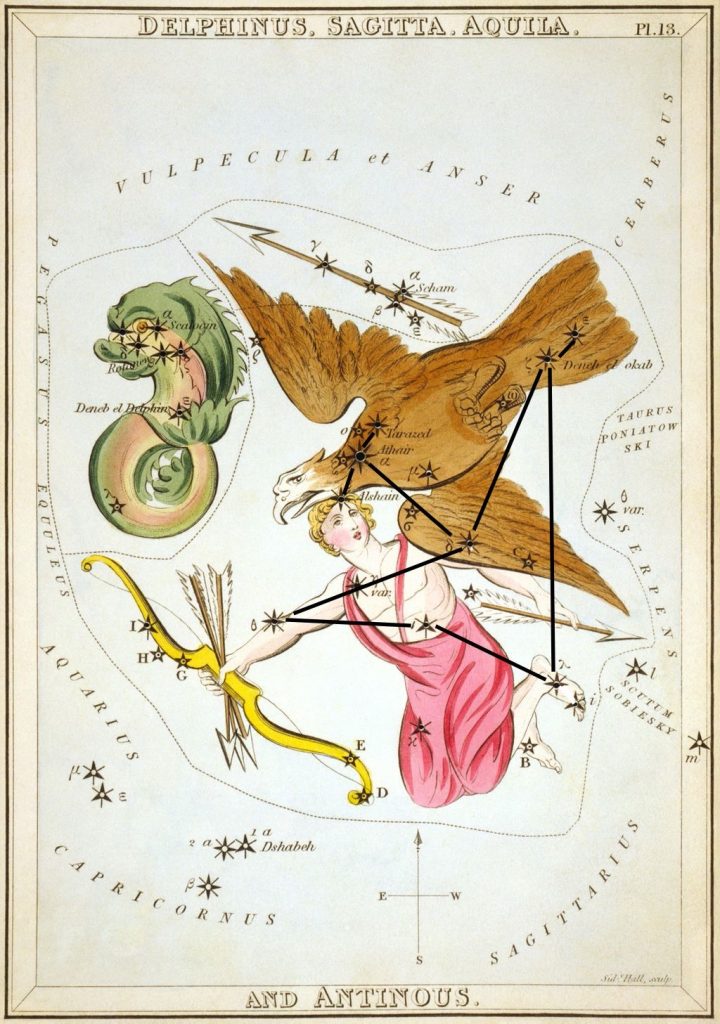 Aquila was the eagle that carried Zeus’ thunderbolts and served the gods.

It abducted Ganymede, a Trojan boy Zeus fancied, to become a cup-bearer in Mount Olympus.

It is the eagle that carved out the liver of Prometheus every day for stealing fire from Mount Olympus to give to humankind.

As a reward for its services, Zeus put the eagle in the skies. In Greek Mythology, Virgo is mostly associated with Persephone, wife of Hades.

Persephone, daughter of Demeter, was gathering flowers in a meadow. Hades saw and fell in love with her.

He attracted Persephone with a narcissus flower. When she approached it, he opened a hole in the ground and captured her to be his wife.

Demeter, Persephone’s mother and the goddess of agriculture and fertility, couldn’t bear the news. She left all her duties as a goddess started searching for Persephone. Famine took over the world.