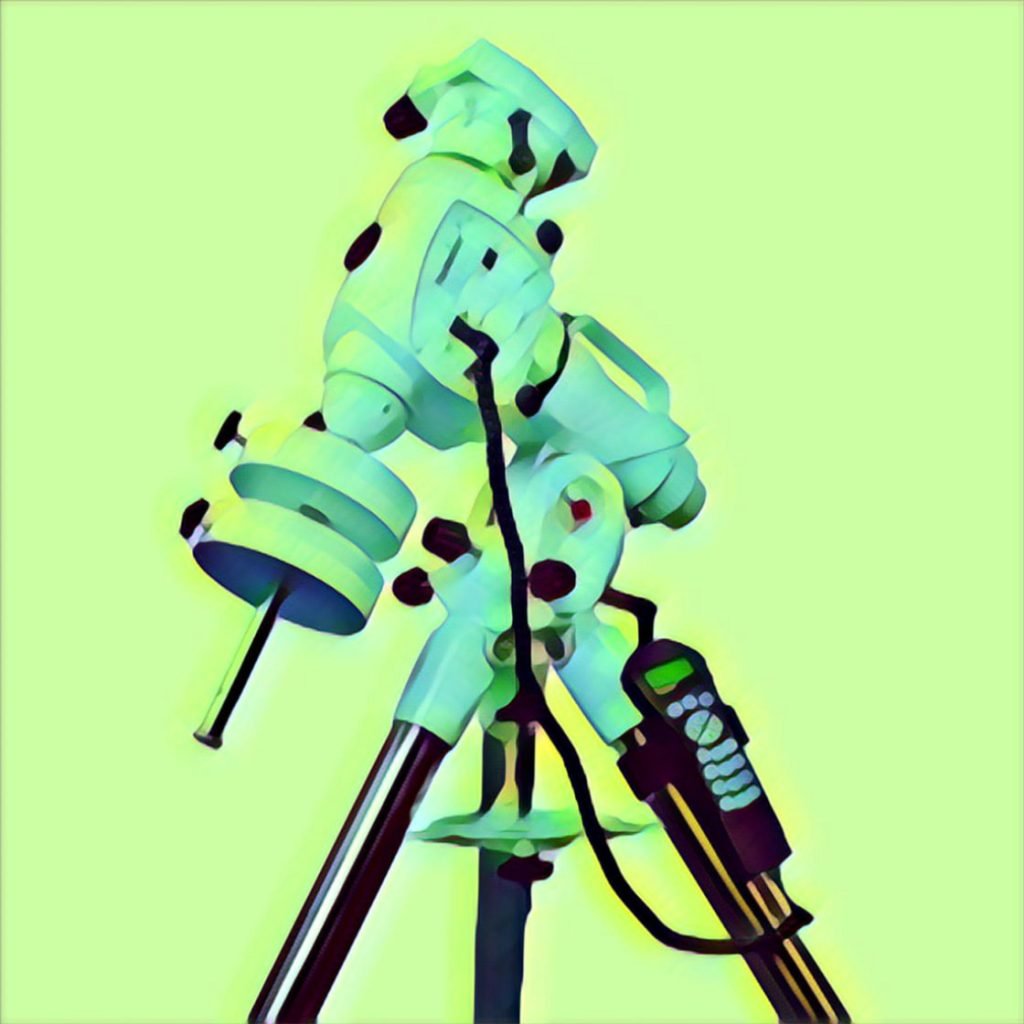 For astrophotography, an equatorial mount is critical to achieving accurate tracking for sharp, long-exposure images. Most schools of thought would argue that you should pick your mount before purchasing anything else. In general, unless you are limited by budget/portability requirements you should always have the biggest and beefiest equatorial mount you can afford.

Bigger mounts are more stable and rigid, they have more accurate tracking/guiding, and they will handle even the smallest payloads better than a cheaper mount can. If you are on a low budget, a good mount paired with a DSLR and kit lens gives you more flexibility than purchasing a star tracker and will allow you to upgrade quickly and for less cost.

You should always have the biggest and beefiest equatorial mount you can afford.

Almost all of the equatorial mounts on the market today are German equatorial mounts that require counterweights and being balanced on both the right ascension and declination axis to use. They are rather uncomfortable and inconvenient to use for visual astronomy compared to a more simple alt-azimuth design and have to be made quite bulky to support heavy payloads. Most equatorial mounts can be controlled either via an included hand controller or directly with your laptop, and are usually able to be autoguided – that is, issued real-time tracking corrections by a secondary telescope and camera mounted alongside or on top of your main instrument. Guiding is pretty much always necessary for top-tier imaging performance with instruments over 400-500mm in focal length. 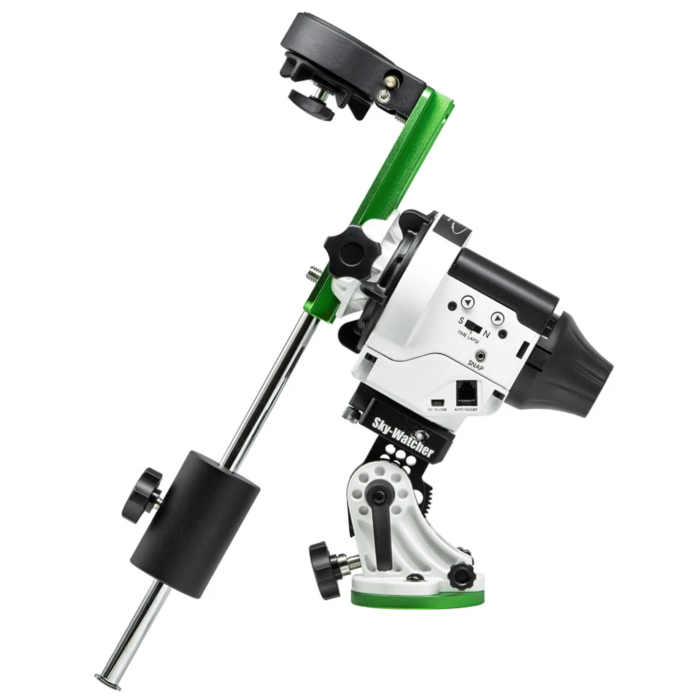 Sky-Watcher’s Star Adventurer 2i Pro is a “star tracker” rather than a true equatorial mount – it can’t really hold a telescope proper and has no provisions for autoguiding. In theory, you could use a small imaging telescope on it, but it’s not the best idea. But if your goal is primarily wide-field astrophotography with a kit lens, the Star Adventurer is great. Just be sure to get a tripod – either the one Sky-Watcher sells separately or a suitable photo tripod for the task.

The Star Adventurer GTi is essentially an equatorial version of the Sky-Watcher AZ-GTi. It is controlled via WiFi and can be autoguided much like any good, larger equatorial mount. However, the payload capacity for imaging is no more than about 5 lbs, which limits you to the smallest refractors or telephoto lenses. For visual astronomy, it can hold a small refractor or catadioptric of 6” of aperture or less. Compared to the regular Star Adventurer, the improvements such as guiding capability are quite a draw even if you’re only using a glorified telephoto lens, and the mount is overall much more sturdy and well-made compared to the Star Adventurer 2i. The Celestron Advanced VX isn’t perfect, but it’s a decent enough mount to get you started. The Advanced VX uses servo instead of stepper motors and has a less-than-perfect declination bearing. The declination bearing is prone to severe backlash and issues with autoguiding, and the mount tends to have some backlash in both directions when tracking and guiding. Some DIY work can improve it, but you’re never going to get consistent sub-arcsecond guiding with this mount. However, it can hold a huge payload – up to about 15lbs for imaging or 30lbs for visual-only use. In practical terms, that works out to a 4” refractor, 6” Newtonian, or 6” Cassegrain for imaging – or a 6” refractor, 11” SCT, or 10” Newtonian for visual use. For the price, the Advanced VX is pretty good, and fairly easy to use too.

Aside from the hardware downsides, the biggest drawback of the Advanced VX is software. It is incompatible with EQMOD (though it does use ASCOM), so it can be a little less responsive to computer commands – which is exacerbated by the backlash inherent in the mount. The Sky-Watcher HEQ5 Pro (identical to the old Orion Sirius EQ-G) sounds similar in specs to the Advanced VX, but it’s quite a bit superior – mainly due to the stepper instead of servo motors and some mechanical design changes to the declination axis. The counterweight shaft slides up inside the mount head, a polar scope is included instead of being sold separately, and the package is overall quite portable. Like the Advanced VX, the weight capacity for imaging is about 15lbs, though you’re more likely to get good images with heavier scopes, longer focal lengths, and longer frames than the Advanced VX likely will let you. For visual astronomy, the limit is closer to 20lbs due to the HEQ5’s smaller diameter tripod legs compared to the Advanced VX (1.75” vs 2” respectively), but that’s plenty for most.

The HEQ5 Pro is easy to use with ASCOM and EQMod to control from your PC and do autoguiding without using the ST-4 point, but a hand controller is provided as well.

The HEQ5 Pro is easy to service and upgrade, plays nicely with most software, and performs great right out of the box. What’s more to ask for? The EQ6R Pro is essentially everything we like about the HEQ5 Pro but bigger. The mount has a capacity of 44 lbs for visual and around 30 lbs for imaging, and it comes with belt drives – which require aftermarket modification to install on an HEQ5 Pro. The mount head is fairly heavy, but the whole mount is still quite portable and easy to set up and operate – though getting it onto the tripod can be tricky if you have the legs extended. The EQ6R gives you plenty of room to grow even if you only plan on using it with a smaller telescope or lens setup. As with the HEQ5 Pro, guiding and tracking performance with the EQ6R are superb, and using it with ASCOM and EQMOD is a breeze.