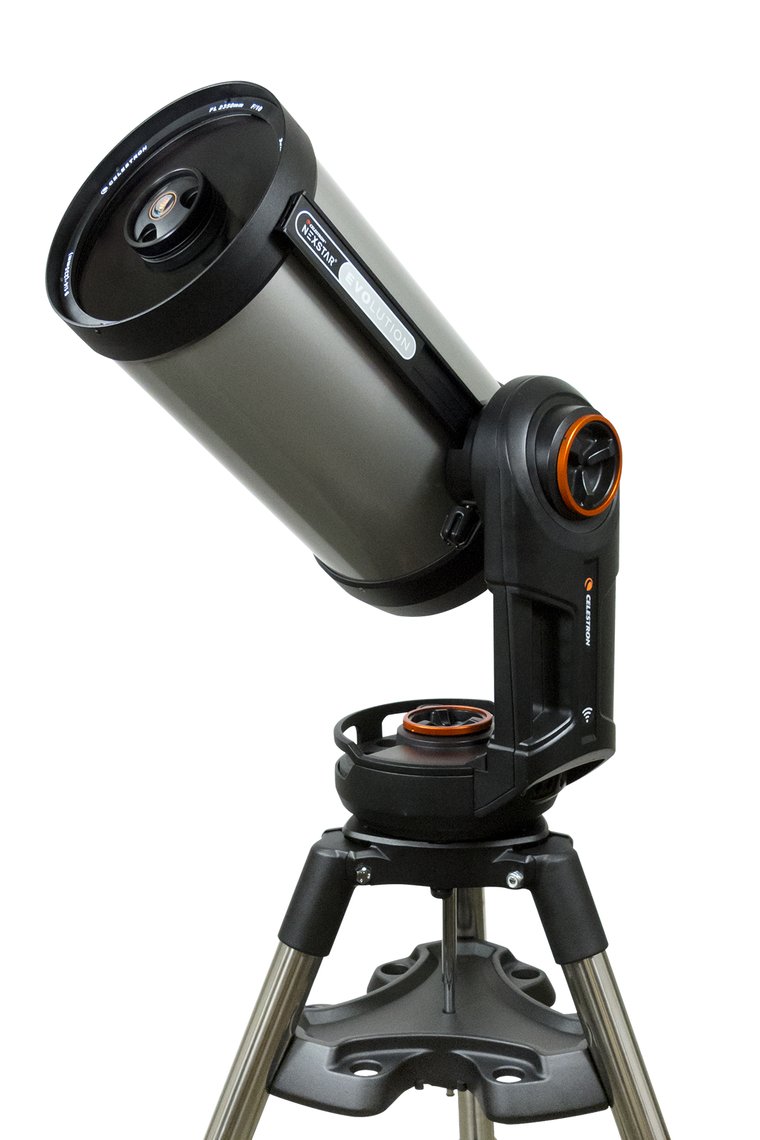 The Celestron NexStar Evolution 9.25” is a great scope bundled with a great mount and tripod – though it’s less portable than it may appear at first.

Compared to the other C9.25/mount packages, the Evolution 9.25 is arguably the easiest to set up and use, but the least stable or capable.

Celestron’s NexStar Evolution 9.25” is the largest of the three NexStar Evolution telescopes in Celestron’s lineup. The Evolution 9.25” is one of several tube/mount combinations offered by Celestron featuring the unusual C9.25 optical tube, and features an alt-azimuth GoTo mount with motorized tracking and GoTo. The C9.25 sits squarely in the middle between typical 8” and 10” telescopes in terms of performance. Compared to the other C9.25/mount packages, the Evolution 9.25 is arguably the easiest to set up and use, but the least stable or capable. 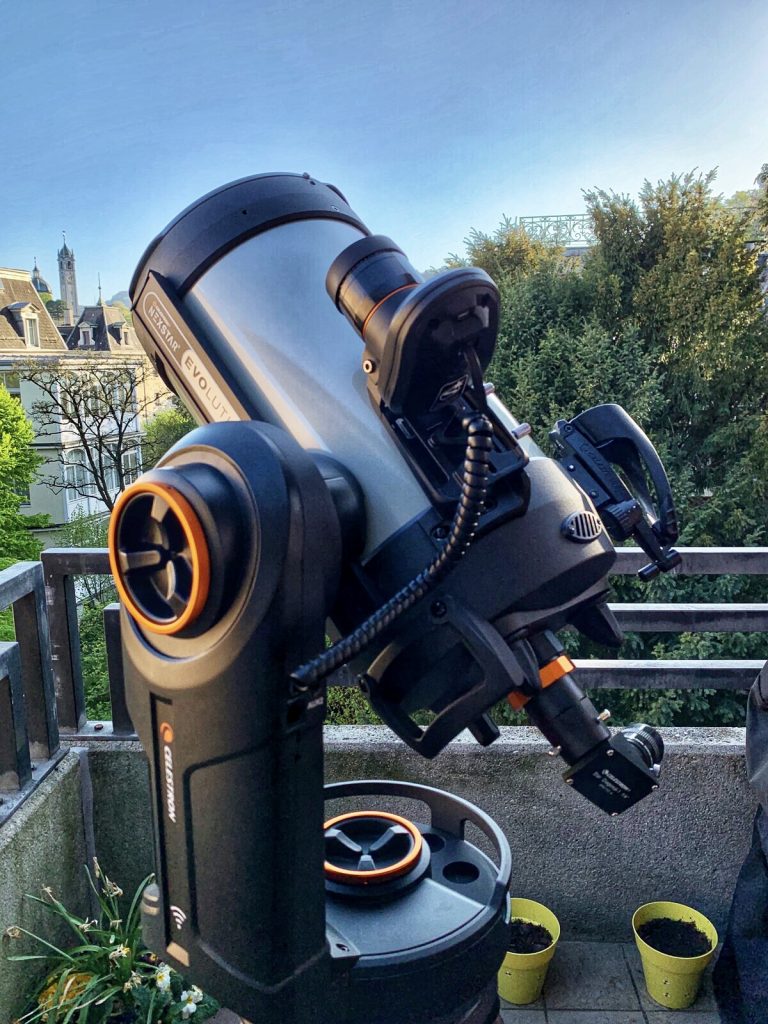 The C9.25 XLT optical tube supplied with the Evolution 9.25 is a 9.25” (235mm) f/10 Schmidt-Cassegrain telescope (SCT) which uses a pair of spherical mirrors (concave primary, convex secondary) and a Schmidt corrector plate to achieve sharp images. Both mirrors have weaker curvature than is standard for an SCT leading to an abnormally long tube proportionally and slightly easier collimation requirements, along with typical superior optical quality, compared to most other SCT models on average. Quality control is also better too, on account of the rather niche audience of the C9.25.

As with most Schmidt-Cassegrain and other catadioptric telescopes, the C9.25’s focusing system is based on a sliding rod that moves the primary mirror up and down the tube to adjust the spacing of the optics and thus move the focal plane. Your accessories are fixed to the back of the telescope, and attach via standard SCT threads which allow you to place cameras, visual adapters, or focal reducers on the back. The secondary mirror of the C9.25 can be removed in seconds without any tools to put the Starizona HyperStar corrector lens in its place and convert the C9.25 into a super-fast f/2 (470mm focal length) Schmidt Camera optical system for astrophotography, though this is an expensive upgrade. 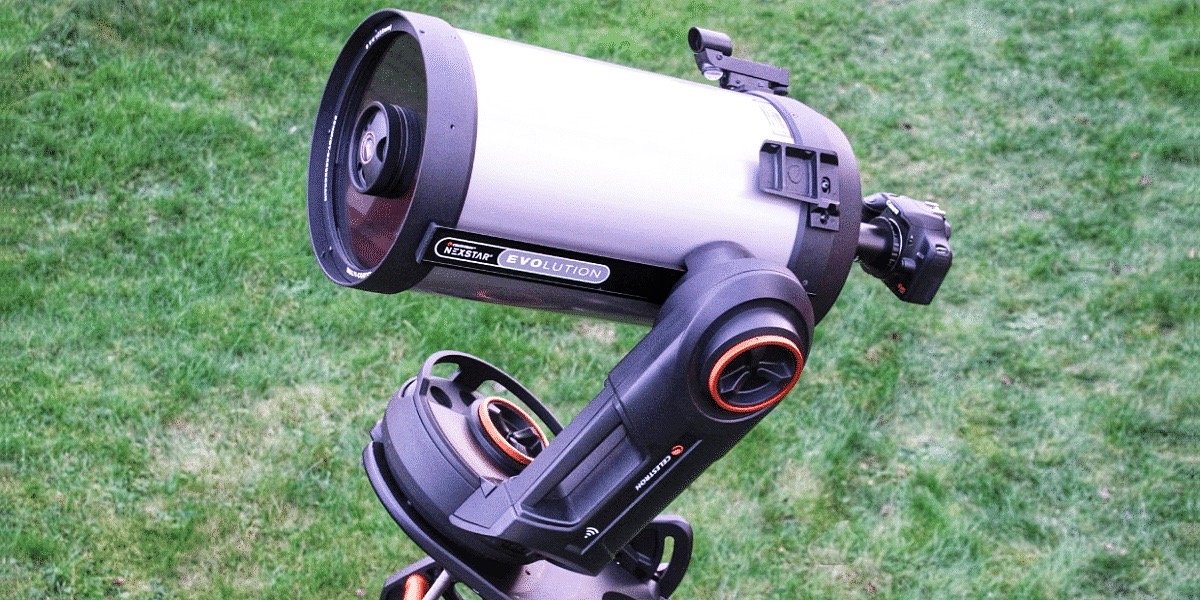 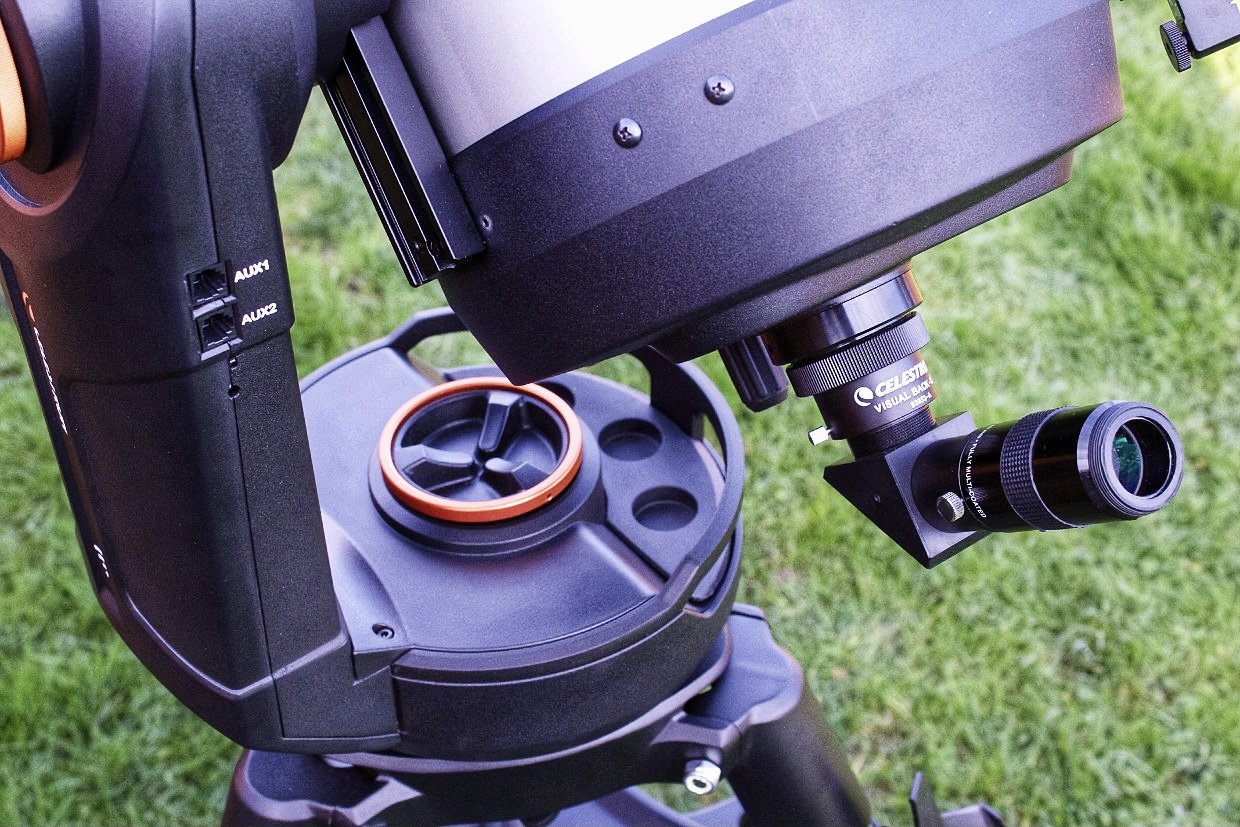 The Evolution 9.25 uses the same NexStar Evolution one-armed fork mount as the other models in the line. The NexStar Evolution mount is an alt-azimuth GoTo mount which you can control either with the provided hand controller or a smartphone/tablet app like SkySafari or the free Celestron SkyPortal app. The mount can technically be converted to an equatorial fork with the purchase of a wedge, but a dedicated equatorial mount is superior. The gears are all-metal and provide accurate tracking, and you can technically unlock the clutches on the mount to aim it manually with the power swithced off (though we wouldn’t recommend it). The mount also has a built-in rechargeable lithium battery, so you don’t need to buy one separately or plow through disposable batteries with this scope.

The Evolution 9.25 includes a heavier-duty tripod than the one supplied with the 8” and 6” models; it’s borrowed from the CPC fork mounts. However, the one-armed design of the Evolution mount is a little bouncy with the C9.25 optical tube and can also have some issues when trying to balance the tube with heavy accessories on the back. 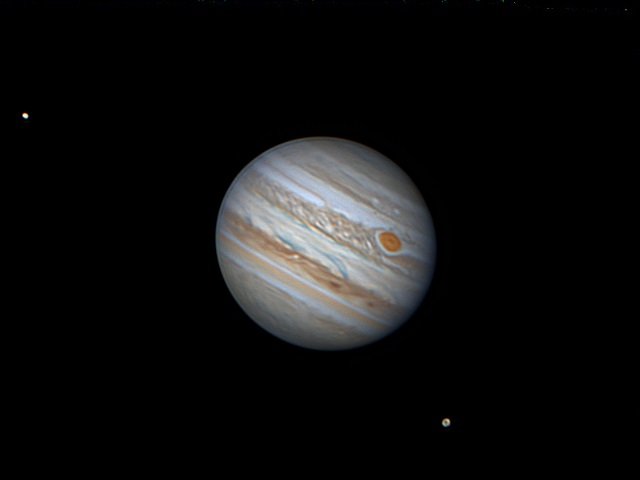 The NexStar Evolution 9.25 comes with a 1.25” screw-on visual back and a 1.25” prism star diagonal. These are fine, but for a wider field of view, an f/6.3 reducer or a 2” diagonal and eyepieces would be a good idea to invest in. Two eyepieces are supplied – a 40mm “E-Lux” Plossl yielding 59x magnification, and a 13mm providing 181x. These are fine to start out with, though you’ll probably want more eyepieces eventually. The scope also includes a red dot finder for initial alignment on the sky.

The NexStar Evolution 9.25 is great for both Solar System objects and deep-sky viewing thanks to the C9.25 optical tube’s large 9.25” aperture.

Mercury and Venus are essentially smooth crescent or gibbous orbs without detail due to the difficulty in observing any detail on Mercury and Venus’ cloud tops, though the C9.25 should have an easier time resolving Mercury than a smaller telescope might.

The Moon looks fantastic with any telescope, and the C9.25 has no trouble revealing details such as craters and mountain tops just a few miles across.

Mars is often too distant from us to resolve any detail, but on a clear and steady night when Mars is at its closest, the C9.25 can resolve its polar ice caps and a few dark markings.

Jupiter’s moons are easy to see at low magnification with the C9.25; high power reveals colorful cloud bands, the Great Red Spot, and the disks of its four largest moons if any are transiting in front of the planet – along with their shadows following close behind.

Saturn’s rings show the Cassini Division within them, along with the Encke gap under superb seeing conditions with the C9.25. The cloud belts on Saturn itself can also be seen along with a handful of moons.

Uranus is too small to resolve any details in its clouds, but the C9.25 should show its disk at high magnification along with possibly one or two faint moons accompanying it.

Neptune is so small and distant that distinguishing it from a star may be difficult, but its moon Triton is easy to see next to it with the C9.25.

Pluto can just barely be glimpsed under dark skies with the C9.25 if you are able to identify it between the myriad stars that it hides among.

What you can see with any telescope beyond bright objects like the Moon, planets, and double stars is affected by the severity of the light pollution in your area. Globular star clusters can usually be resolved under almost any conditions with the Evolution 9.25, and open star clusters look great (though large ones may not fit in the narrow field of view possible with the C9.25 optical tube thanks to its long 2350mm focal length). Galaxies and nebulae, however, look best under dark skies, where you’ll be able to see hundreds if not thousands of galaxies as well as resolve details like dust lanes within the brightest ones, and nebulae like the Orion Nebula or the Swan will look fantastic. 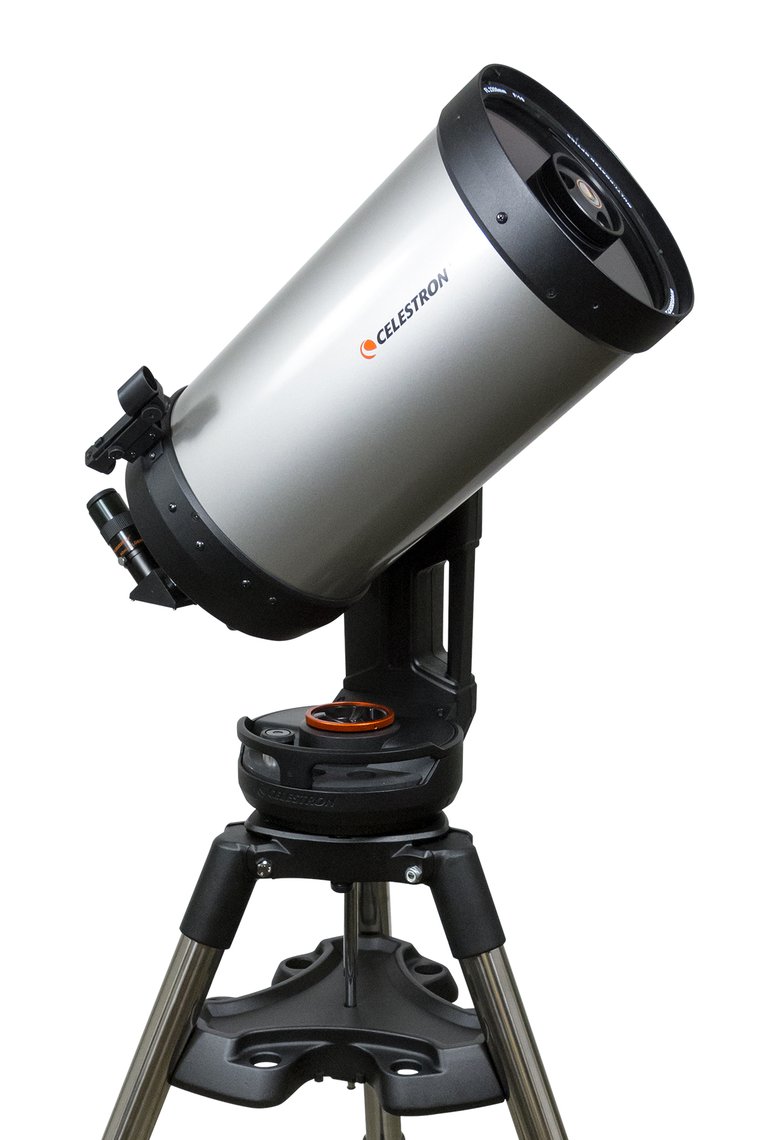 As previously mentioned, the Evolution 9.25’s mount head is a little jiggly with the C9.25 optical tube and also can have issues with achieving proper balance with 2” accessories without hitting the mount with the star diagonal attached to the back of the tube. And while you can use the scope for deep-sky imaging with a wedge, an equatorial mount would be a much better choice. If astrophotography is your main goal, the Advanced VX-mounted C9.25 package would probably be a better choice. If you want something more portable, we’d consider the NexStar Evolution 8 instead. 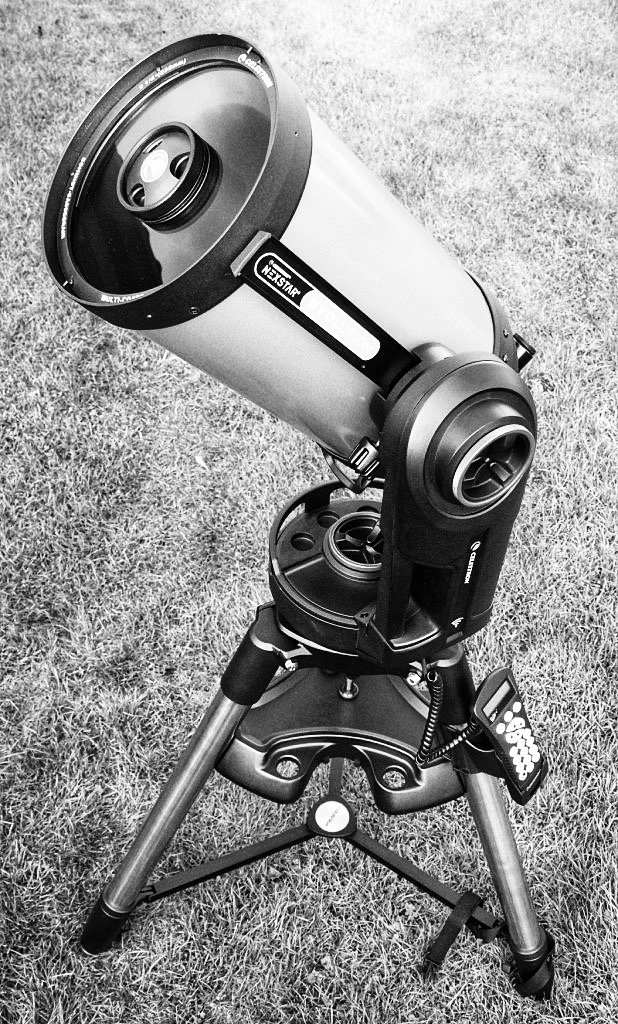 The Celestron NexStar Evolution 9.25 is a great telescope. However, it is significantly less portable or stable than the 8” Evolution and provides rather little gain in light gathering or resolving power. As such, we’d recommend looking at the other C9.25 packages Celestron offers, as well as possibly downsizing to an 8” SCT, before purchasing.