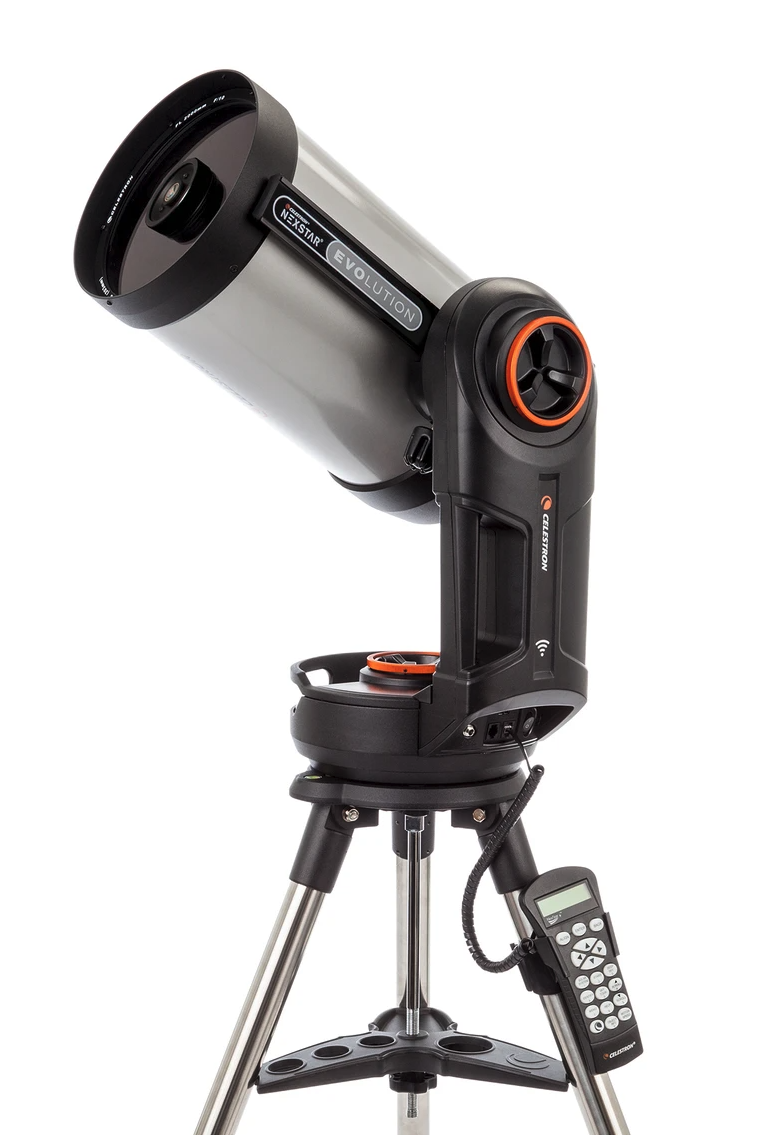 The Celestron NexStar Evolution 8” is quite expensive, but gives you a plethora of visual and astrophotography capabilities in a convenient and compact package.

The Celestron NexStar Evolution 8” is the latest telescope in Celestron’s 50-year-old line of 8” fork-mounted Schmidt-Cassegrains. Like the NexStar 8SE that precedes it, the Evolution features a single-arm fork mount and has full motorized tracking and GoTo capabilities. Compared to a cheaper 8” Dobsonian, the Evolution 8 is about as heavy and takes up as much space in a car, but breaks down into smaller individual pieces. 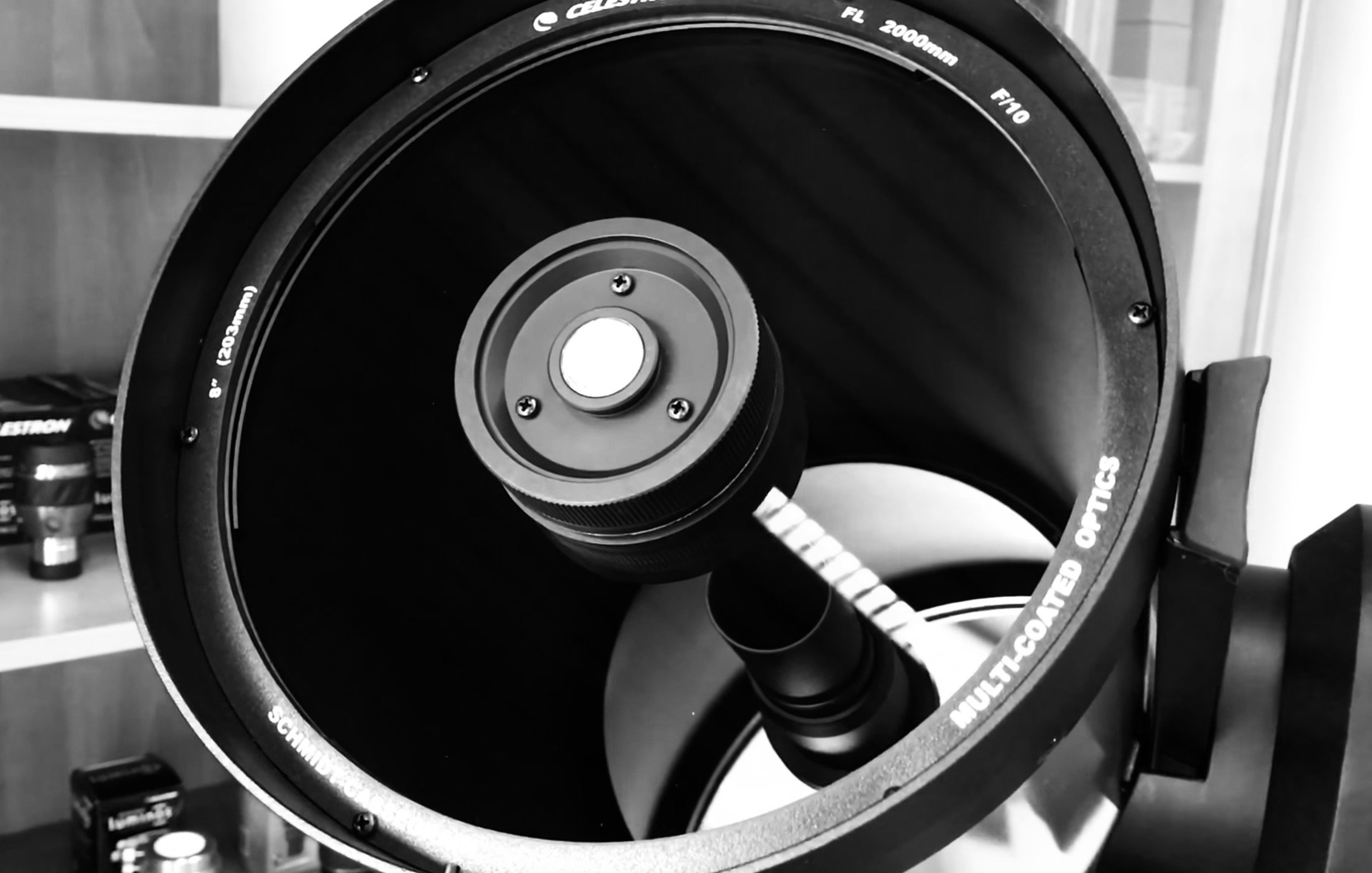 The C8 optical tube which the NexStar Evolution 8 uses has been Celestron’s flagship since 1970. The C8 is an 8” (203mm) f/10 Schmidt-Cassegrain telescope with a focal length of 2032mm, achieved by “folding” the optics with a convex curved secondary mirror and an extremely curved concave primary mirror. Focus is achieved by turning a knob at the back of the telescope to move the primary mirror back and forth; your eyepiece or camera stays in the same position at the back of the scope. The newer C8 XLT optical tube can be converted to an f/2 Schmidt camera system with Starizona’s HyperStar corrector, or to f/6.3 with Celestron’s reducer-corrector for either visual or astrophotography use. The C8 performs well on all targets for both visual and astrophotography use, as with any good 8” telescope, but its narrow field of view for visual astronomy – limited to about 1 degree – is annoying when trying to view larger deep-sky objects. 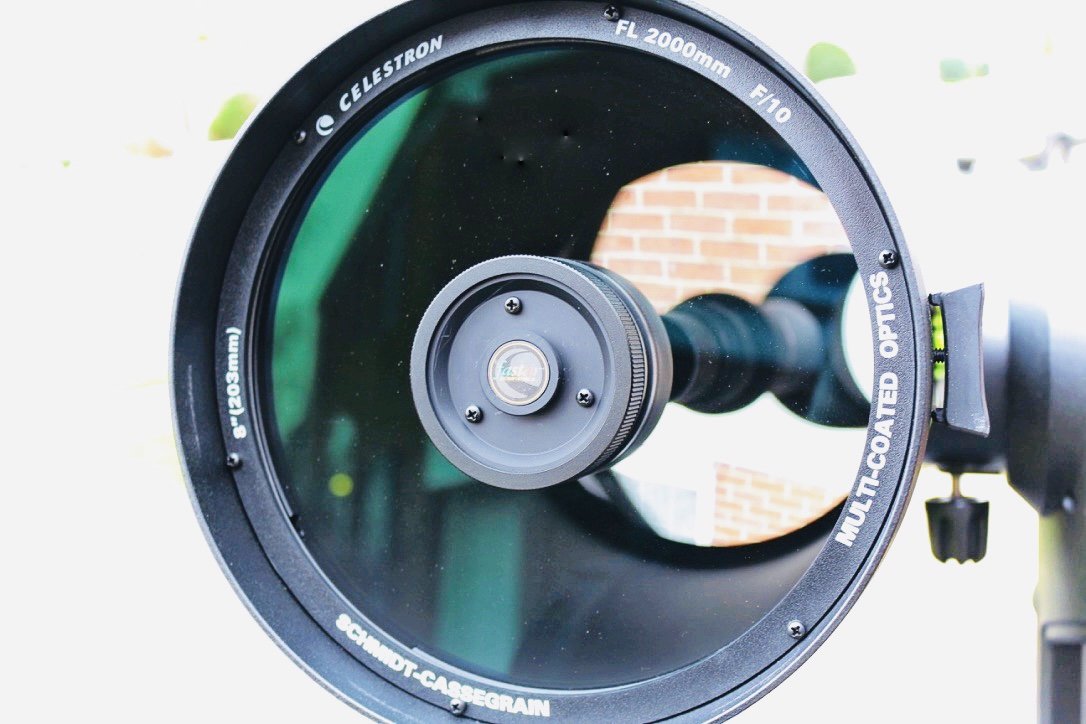 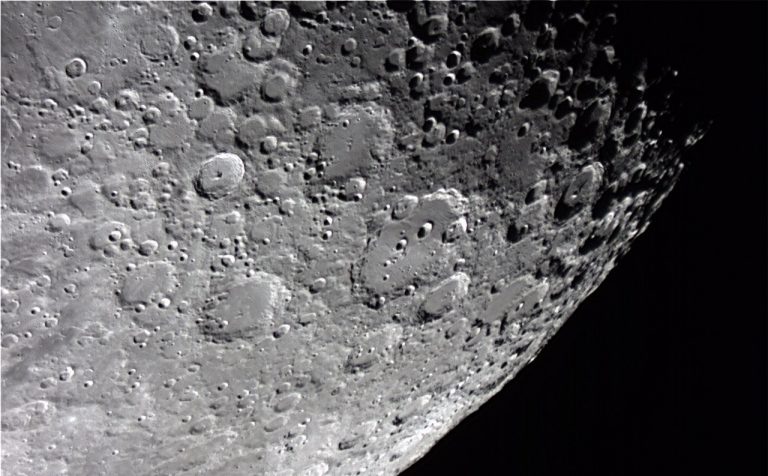 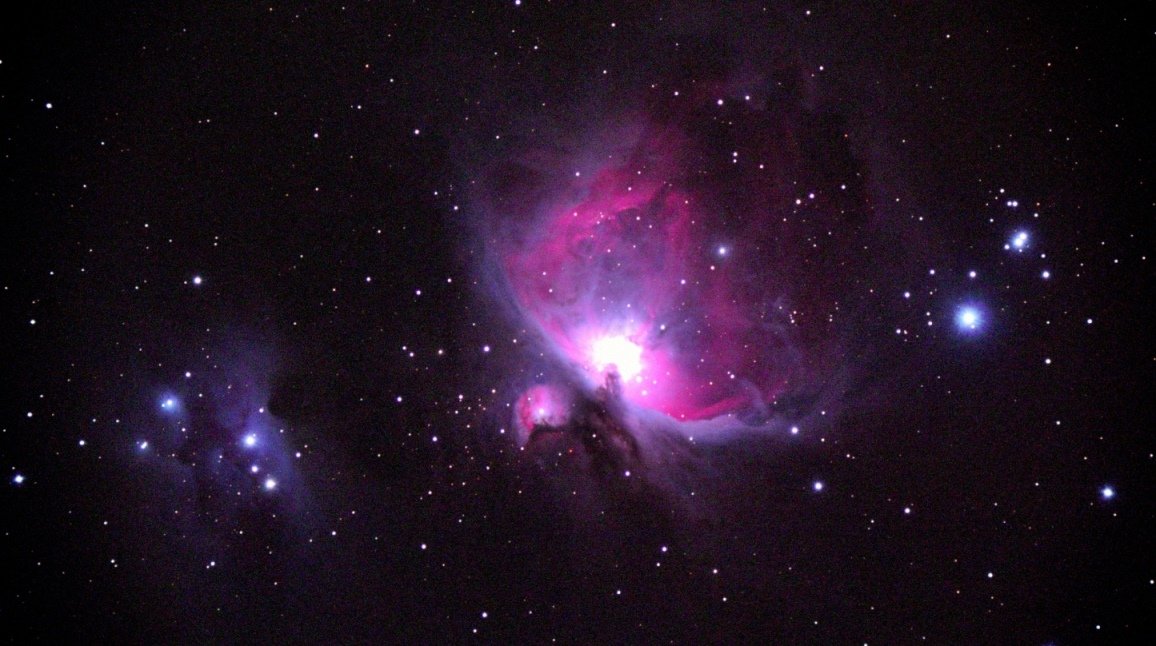 The NexStar Evolution mount is an alt-azimuth GoTo mount which can be converted to an equatorial mount with the purchase of Celestron’s equatorial wedge, and preferably a beefier tripod (sold separately). The Evolution mount can theoretically be aimed by unlocking the clutches and pointing manually, but in practice powering up and aligning it on the sky is mandatory – though this luckily only takes a few minutes. The mount has a built-in lithium battery that can run the telescope for several nights on a full charge, all-metal internal gears, and an included hand controller – though you can also run the scope with your smartphone or tablet using the Celestron SkyPortal or SkySafari Pro app. 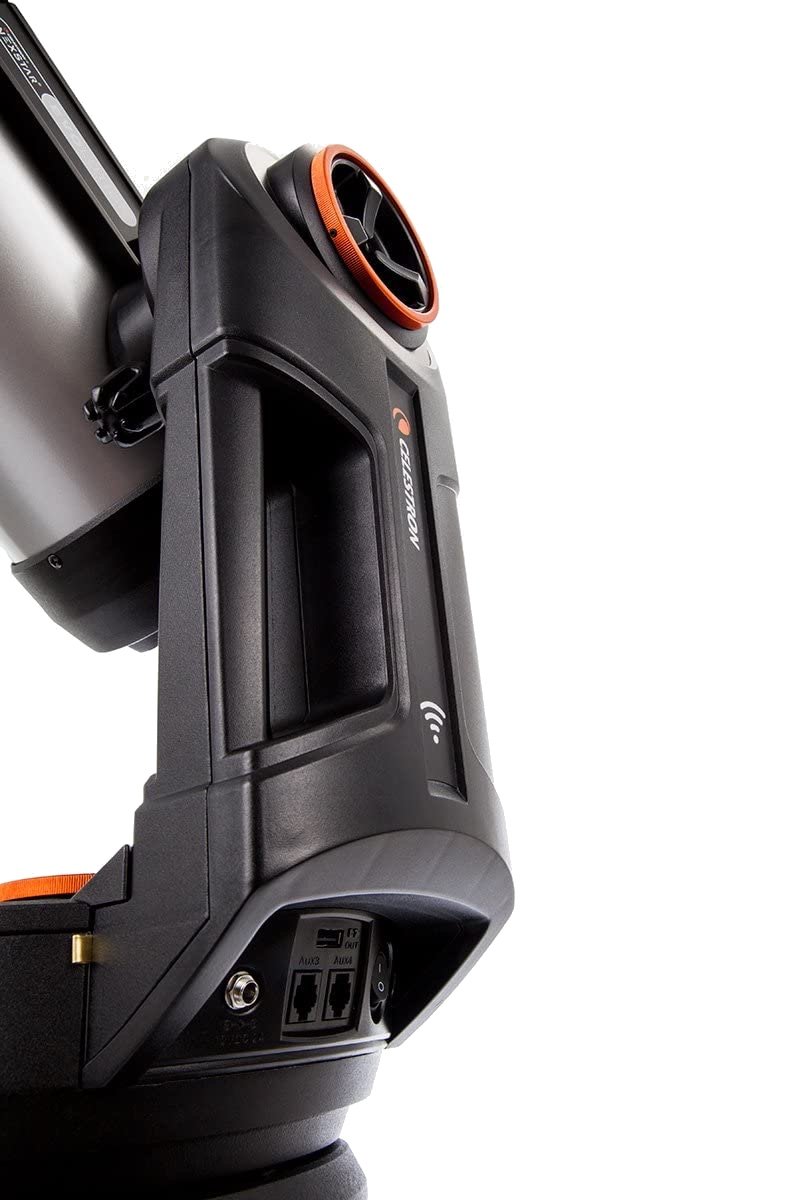 The NexStar Evolution 8 includes a decent set of accessories. A red dot finder is provided for doing a star alignment during setup. You also get a 1.25” visual back and a 1.25” prism star diagonal, and two eyepieces: a 1.25” 40mm “E-Lux” Plossl eyepiece providing 51x and a 0.75 degree field of view with the Evolution 8, and a 13mm Plossl for 156x magnification. For some observers, this may be all you really need, but most people would be better served by extra eyepieces and either a 2” star diagonal or f/6.3 focal reducer, either of which permits a larger true field of view than is possible with 1.25”-only eyepieces at f/10.

Like any good 8” telescope, the Celestron NexStar Evolution 8 can show you a lot. The Moon and planets look great regardless of your light pollution conditions, though steady air helps a lot.

Mercury and Venus are of course featureless crescent or gibbous orbs with any amateur telescope, but the Evolution 8 has no trouble resolving tiny Mercury’s phases most of the time where smaller scopes might struggle.

The Moon shows jaw-dropping detail under any conditions regardless of phase, with craters, ridges, and mountain chains just miles across able to be resolved with the Evolution 8 on a clear and steady night.

Mars’ polar ice caps and any ongoing dust storms are the most obvious features that can be seen, but when the planet is particularly close to Earth the Evolution 8 can show you several dark markings on its surface, too.

Jupiter’s vivid cloud belts are easy to spot at even low power with the Evolution 8, and high magnification will reveal smaller cloud details and the Great Red Spot. Jupiter’s 4 large moons can also be seen, and their disks reveal themselves – along with their inky black shadows – when they transit across Jupiter’s face.

Saturn’s rings are of course its hallmark feature, but the Evolution 8 also shows the Cassini Division within the rings, some cloud banding on Saturn itself, and a handful of moons, which appear as tiny star-like pinpoints.

Uranus’ disk is somewhat resolvable with the Evolution 8, but its moons will elude you as they are simply too dim to detect with an 8” telescope.

Neptune is difficult to distinguish from a star with the Evolution 8, or really any telescope under most conditions, but you can see its moon Triton next to it fairly easily.

Pluto is technically visible as a dim, star-like point under dark skies with an 8” telescope, but good luck distinguishing it from the surrounding star fields.

The amount of detail and number of deep-sky objects one can see with the NexStar Evolution 8, as with any telescope, is severely affected by light pollution. Open star clusters and globular star clusters usually look good even from the city, but bright nebulae like Orion (M42) are washed out and lackluster, and dimmer ones are simply invisible altogether. Galaxies suffer even further; the Evolution 8 can start to show spiral arms and dust lanes as well as many galaxy groups under dark skies but under city skies seeing even the Andromeda Galaxy (M31) can be challenging. 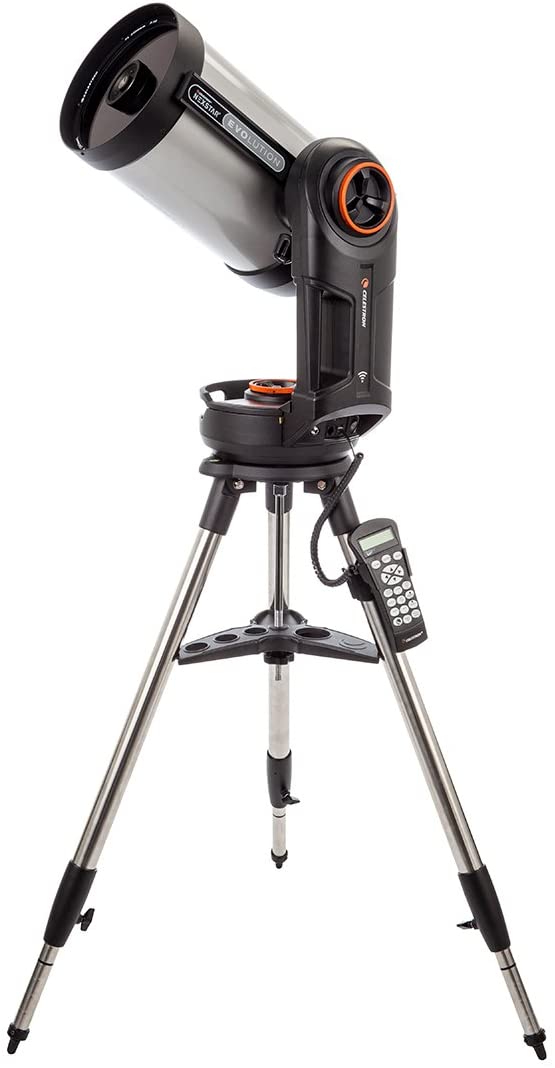 The NexStar Evolution 8 is more expensive than the 8SE, which is comparable in views and features but suffers from a somewhat shaky tripod, and several times the price of an 8” Dobsonian which will put up essentially identical views and is arguably easier to set up and use. The longevity of the lithium batteries in the Evolution 8 is also a concern; some old units have already died and Celestron will not be supporting these products forever.

If your budget is big enough and you want to stick with an 8” telescope, the Celestron NexStar Evolution 8 is an excellent choice, whether you’re a newcomer to the hobby, upgrading from something smaller, or looking for a more portable complementary telescope to your other setup(s). We highly recommend it, though it’s of course a bit of a sticker shock when ordering.