ExploraScope 70AZ is a perfectly fine beginner’s model, but its price tag is too high.

Celestron rarely sells beginner models at fair prices. Their line-ups are filled with overpriced junk. Thankfully, ExploraScope 70 is not one of those models. It is a decent refractor being sold at a fair price.

Before I start the review, I have to remind you that a tabletop reflector would provide the best image possible at this price range. A reflector is much easier to manufacture; therefore, it should be the “go-to choice” for beginners.

But for some people, a tripod is a must. They need the portability and convenience that comes with a tripod. They also don’t want to bother with collimation, which is a regular alignment procedure that is required with reflectors.

A refractor overall is much more convenient and easier to use, but slightly less powerful. 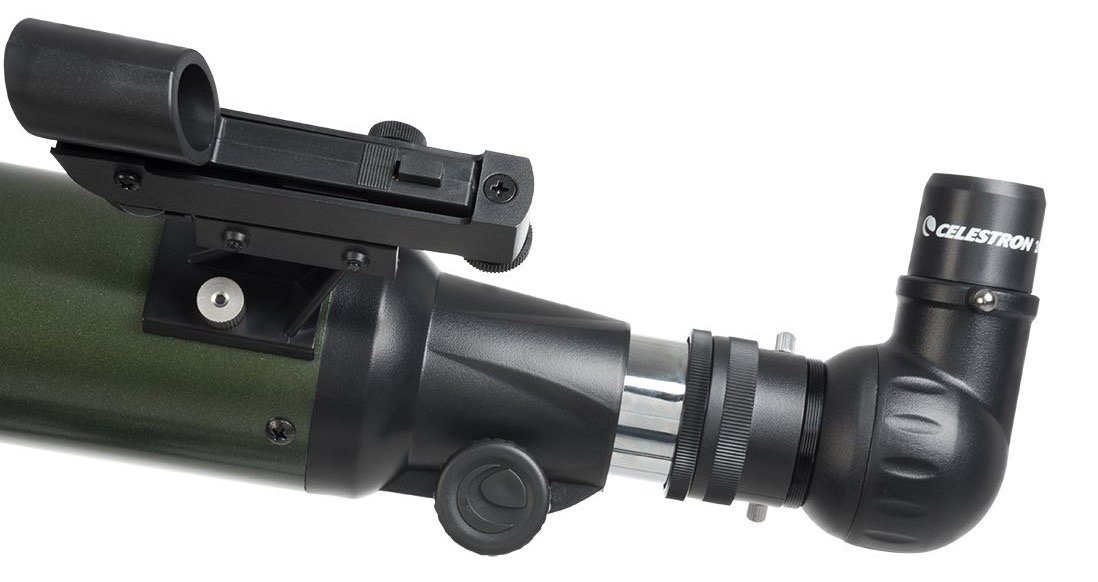 The amount of detail you can get from the Solar System is pretty impressive, considering the size and price of ExploraScope 70.

The Moon also looks impressive with a good amount of detail from the mountain ranges and craters. Refractors are especially good for Lunar detail due to their long optical tubes.

Deep Space performance is another story. The 70mm aperture only takes in so much light. Therefore it is impossible to see dimmer deep space objects. You will only be able to get good views of exceptionally bright deep space objects such as the Andromeda Galaxy, Orion Nebula, and Hercules Star Cluster.

With a refractor telescope, chromatic aberration is usually a problem.

Chromatic aberration is a colorful halo around bright images that is created due to the diffraction of light in the lenses. But the optical tube is long enough to reduce chromatic aberration to a low-enough level that most people wouldn’t notice it.

Another reason why we strongly recommend this telescope is the amount of aperture you get for the price. This telescope is around 80$ and has a 70mm aperture. For an 80mm aperture telescope, you probably will pay twice as much. A 70mm lens is a sweet spot in that sense.

The mount is not out of this world. It is mostly plastic with two connections to the optical tube. It is definitely enough for a telescope this size, but don’t expect rock-solid stability.

The motions on the vertical and horizontal axis are smooth enough for a 70mm refractor. The long optical tube definitely helps with that due to the strong torque that is created in the mount.

The tripod is surprisingly sturdy. It is aluminum and has a foldable connection on each of its legs. It also has a tray in the middle for putting eyepieces and maybe a flashlight in the night. A good tripod is very important for a telescope, and this is the accessory that creates a particular advantage over tabletop reflectors.

There is slow-motion control in the vertical axis implemented on the mount. It is definitely useful since gravity creates tiny, annoying movements in long refractors. But there is no slow-motion control for the horizontal axis. Although it is not a huge problem, it would be a nice addition. 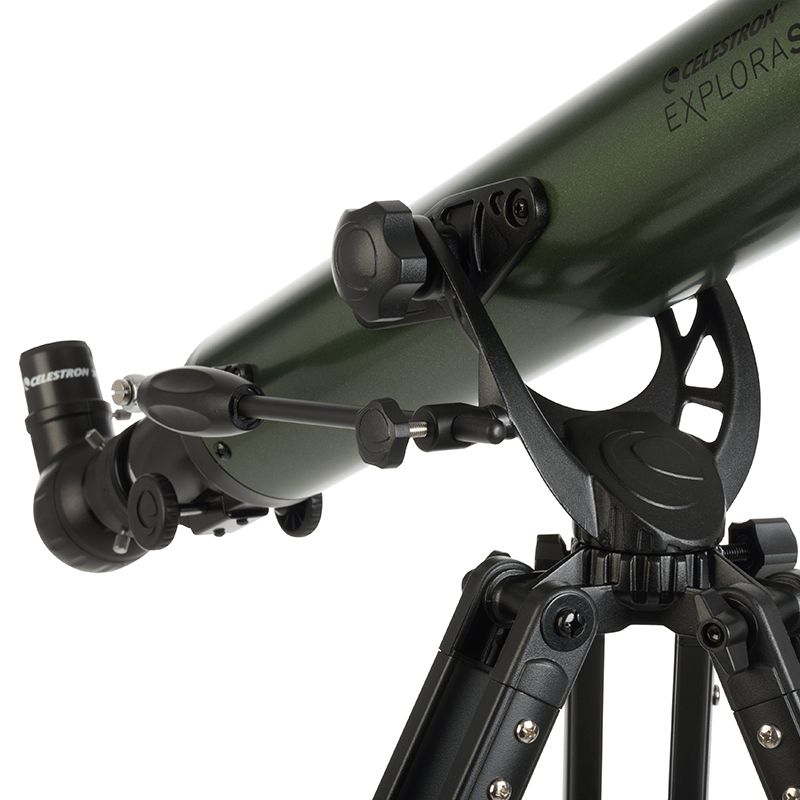 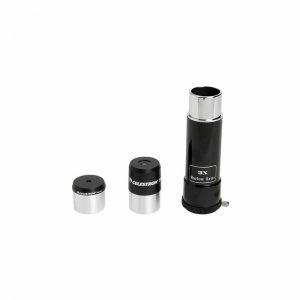 Celestron keeps providing useless accessories so they can write bigger magnification numbers on the front page of the poster. The 4mm eyepiece and the 3x Barlow belong to that category.

The 4mm eyepiece provides 175x magnification, which is ridiculously high for a telescope this size. You won’t get a good image with that eyepiece even if you manage to focus the telescope. The lens is so small a person with glasses would struggle to even use this eyepiece in the first place.

A 3x Barlow will supposedly triple the magnification with any eyepiece. For example, if you are using the 20mm(35x) eyepiece with the 3x Barlow, it should go up to 105x. But the image quality is lowered so much it only creates disappointment and frustration.

The 20mm eyepiece is surprisingly a sensible accessory. It provides a mid-range, 35x powered image. I would call this eyepiece “usable”. The lens is uncomfortably small, and it is mostly plastic. Changing it with a better one would vastly improve your experience and image quality.

The focuser is mostly plastic, but it does its job without a problem. At this price range, a plastic focuser is normal.

The red dot finder is probably the part best of the accessories apart from the tripod. It is nicely attached to the optical tube. It is easy to align. It is easy to use. Attaching and detaching it is easier than most other telescope models. 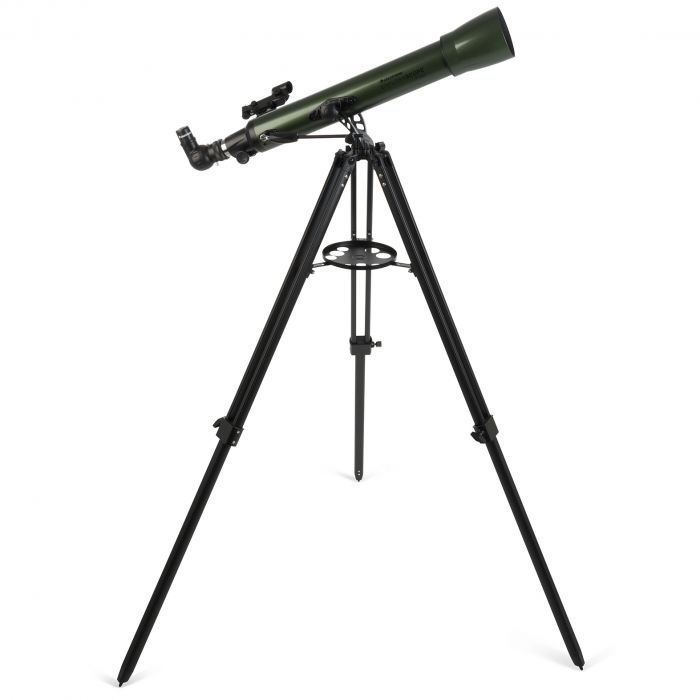 The 4mm eyepiece and the 3x Barlow are useless. I wouldn’t even use these and throw them to thrash as soon as I receive them.

The optics don’t provide the most power you can get for the price. As I’ve said before, a tabletop Dobsonian, such as an Orion SkyScanner 100 or Zhumell Z100, provides better, wide-field images. Adding to that, they have rock-solid mounts with butter-smooth motion in both vertical and horizontal axis.

I would recommend ExploraScope 70AZ because of its price and convenience. Out of the box, it takes around 15 minutes to set it up, and you don’t have to think about anything else. The whole telescope weighs only 6 lbs, and the optics don’t require any kind of maintenance at all.

Just start observing. Maybe get a better eyepiece in the future. For a little less power, you get more ease of use. That is the deal you make with Celestron ExploraScope 70. 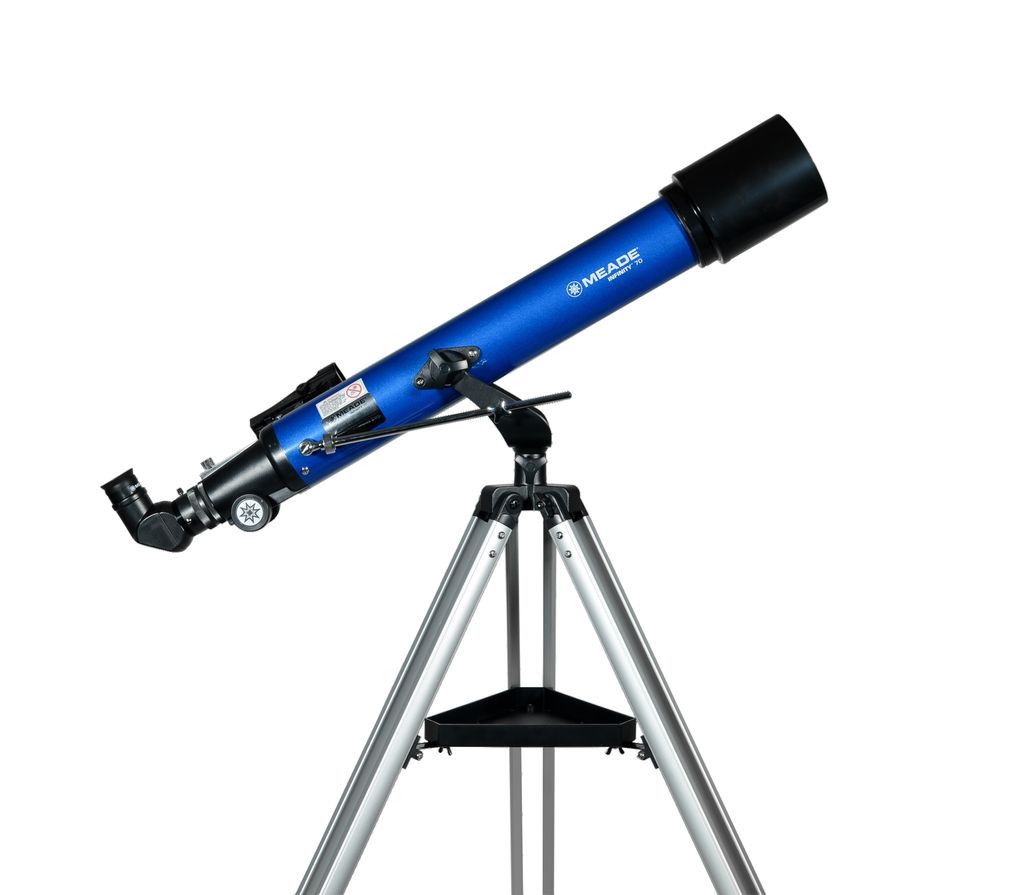 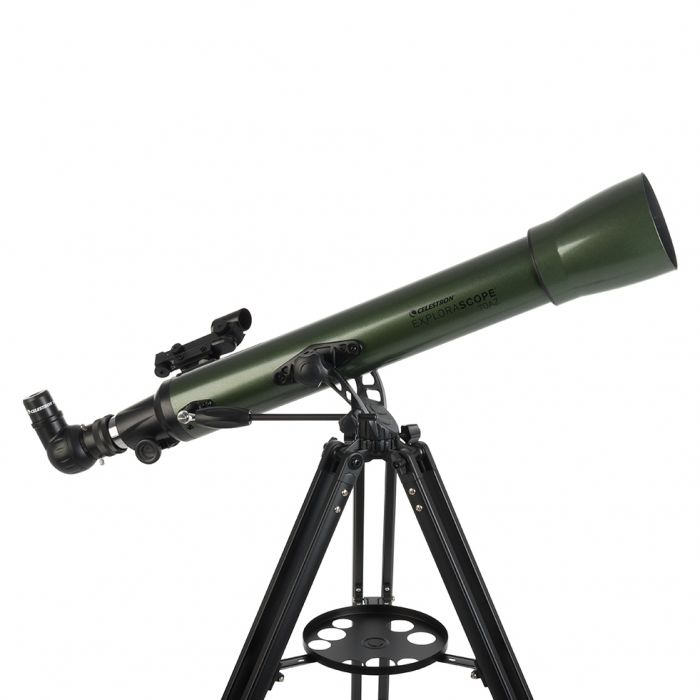 Meade Infinity 70 is almost exactly the same with ExploraScope 70, and the two are worth a short comparison.

The optics are identical. But Infinity 70’s focuser is slightly better, and Meade doesn’t send useless accessories. But the difference is not that important. You may have different brands available in your country, so don’t pay much attention to the difference in focusers and accessories. I would recommend getting the one that is easier to get.